Election campaign goes to the airwaves

THOUGH official campaigning before Slovakia’s March 10 parliamentary elections was supposed to have kicked off on February 18, the country was already flooded with billboards featuring politicians and their election slogans, while campaign teams roamed the country offering promises and excerpts from election programmes to potential voters. 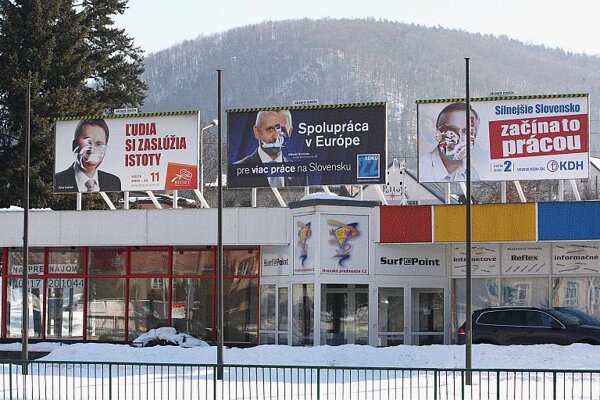 THOUGH official campaigning before Slovakia’s March 10 parliamentary elections was supposed to have kicked off on February 18, the country was already flooded with billboards featuring politicians and their election slogans, while campaign teams roamed the country offering promises and excerpts from election programmes to potential voters.

The 26 political parties registered for the election are now allowed to campaign up to and including the day of the vote following the scrapping of a previous election-day moratorium. However, the results of opinion polls cannot be published on the day of the election; the ban lasts until polling stations close.

The parties running in the March 10 parliamentary elections in Slovakia are (in order of the election numbers they have drawn): the Greens; the Christian Democratic Movement (KDH); the Party of the Democratic Left (SDĽ); the Slovak National Party (SNS); Ordinary People and Independent Personalities (OĽaNO); Freedom and Solidarity (SaS); Right and Justice; Our Region; the Green Party; People’s Party Our Slovakia; Smer; Change from Below – Democratic Union of Slovakia; Nation and Justice – Our Party; the Communist Party of Slovakia (KSS); the Party of the Roma Union in Slovakia; Most-Híd; 99 Percent – Civic Voice; the Movement for a Democratic Slovakia (HZDS); Party of Plus 1 Vote; Free Forum – We are Doing it for the Children; Ordinary People; the Slovak Democratic and Christian Union (SDKÚ); the Party of Citizens of Slovakia; the Hungarian Coalition Party (SMK); the Free Word Party of Nora Mojsejová; and the Party of Slovak Tradesmen.

According to Slovakia’s Election Act, the public-service broadcaster, Radio and Television of Slovakia (RTVS), has to allocate 30 minutes of airtime to each political party. Another 10 hours are set aside for discussion programmes. Moreover, RTVS is obliged to broadcast a message before airing a political advertisement in order to distinguish these clearly from regular programming.

Though the act stipulates that the broadcast media are allowed to broadcast political advertisements no earlier than 21 days before an election, private broadcasters TV Markíza and TV JOJ have been presenting what they term “sponsors’ messages” featuring people connected with the new 99 Percent – Civic Voice party since at least January.

Coupled with a nationwide billboard advertising campaign, the party’s unofficial TV campaign seems to have had an effect. According to an opinion poll conducted by the Polis agency during the first week in February, the party, which was virtually unknown only six months ago, would make it into parliament with 6.9 percent of the vote, the TASR newswire reported.

While TV JOJ received only a warning for a first offence, TV Markíza was fined €100,000 as it had previously been found guilty of a separate violation. The council later also sanctioned private broadcast Fun Rádio, which broadcast advertisements by 99 Percent between January 17 and January 19. The station received a warning.

“The council only has two options with sanctions: the first is a notice concerning a violation of the law if it is the broadcaster’s first offence,” RVR head Miloš Mistrík told TASR. “The second is a fine of between €3,319 and €165,969.”

However, none of the broadcasters was ordered to stop broadcasting the advertisements, SITA wrote.
“In Slovakia there is no law which would allow the broadcasting of these ads to be halted,” Mistrík said, as quoted by SITA.

TV Markíza’s Oľga Dúbravská said that the broadcaster did not consider the fine to be “appropriate” and was ready to appeal. TV JOJ said that it was convinced that it had not violated the law and would probably turn to the courts, SITA wrote.

Zuzana Wienk from political ethics watchdog Fair-Play Alliance said that she believes that the broadcasters did break the law as ‘sponsorship’ is defined in the Broadcast and Retransmission Act as the financing of a programme that aims to promote “the name or the business name, trademark, reputation, products or activities of the entity or individual who has provided a performance”.

She wrote on her blog that sponsorship cannot promote any mottos, names or people, and that this is regarded as ‘political advertising’. Wienk argued that such advertisements could only contribute to an increase in voter support.