THE LABOUR market has given Slovakia another gloomy economic statistic with the Central Office of Labour, Social Affairs and Family reporting that the January unemployment rate hit 13.69 percent, the highest since June 2004, when 13.91 percent of the country’s economically active population was unemployed. The high number of persons unemployed for a year or longer and the growing number of young people without jobs is causing consternation in many quarters, not least among those looking for work. 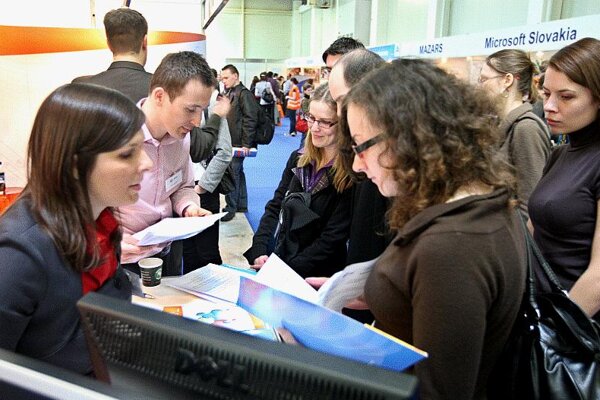 Finding a job can be a difficult task for young people. (Source: SME)
Font size:A-|A+

THE LABOUR market has given Slovakia another gloomy economic statistic with the Central Office of Labour, Social Affairs and Family reporting that the January unemployment rate hit 13.69 percent, the highest since June 2004, when 13.91 percent of the country’s economically active population was unemployed. The high number of persons unemployed for a year or longer and the growing number of young people without jobs is causing consternation in many quarters, not least among those looking for work.

In December 2011 the percentage of young people under 25 years of age who were registered as unemployed at the country’s labour offices rose to 35.1 percent, the third highest rate among countries of the European Union. But the high youth jobless rate is not a phenomenon restricted to Slovakia and the European Union has announced steps to try to address the problem.

“Partly this is a consequence of the economic crisis when no new jobs were created and the graduates who entered the labour market did not have jobs to take up,” Michal Páleník, the director of the Employment Institute, a labour market think tank, told The Slovak Spectator.

Páleník added that the problem of high joblessness among young people was not as visible several years ago and that Slovakia had a better standing among EU countries then.

A second reason for high youth unemployment, according to Páleník, is that Slovakia’s education system has not adjusted its study programmes to better meet the needs of the labour market.

The president of the European Commission, José Manuel Barroso, sent a letter to the EU countries that have a youth unemployment rate higher than 30 percent calling on their governments to start dealing with the problem and offering assistance from EU structural funds. Slovakia is able to draw up to €2.3 billion that will be allocated from the European Social Fund (ESF), the European Fund for Regional Development (EFRD) and the EU’s Cohesion Fund. While appreciating this financial assistance, labour market analysts say that Slovakia must take some additional steps to make it easier for young people to find jobs, the TASR newswire wrote.

A specific measure to deal with youth unemployment discussed at the late January meeting of EU leaders was to establish action teams that will be composed of national representatives and representatives from the European Commission, with a main goal of accelerating and targeting the use of EU structural funds. The country action teams are expected to prepare concrete plans for the EC by mid April 2012. The EC has proposed providing extra funds to eight countries to develop programmes aimed at employment of young people as well as support for small and medium-sized companies, SITA wrote.

Maroš Šefčovič, who is a vice-president of the EC for Inter-Institutional Relations and Administration, and who is also from Slovakia, reacted positively to the plan to create teams of experts from inside the countries, joined by EC experts, to develop measures that will become part of national action plans for employment.

“They [the countries] will use good experience from other countries where these measures have been successful, for example in Austria, and in cooperation with the European Commission they will find ways to reallocate the money not drawn from the European Social Fund or other funds,” Šefčovič stated, as quoted by TASR.

Nevertheless, the EC proposal has been criticised by some members of the European Parliament who say that this kind of help might endanger trust in regional policy initiatives, the Euractiv.sk website reported, adding that these MEPs disagree with reallocating money from the Cohesion Fund because much of it has already been designated for certain projects.

“Growth and employment are covered in the mission of the cohesion policy but the way in which the Commission presented its proposal has raised some concerns,” said Danuta Hübner, the chair of the European Parliament’s committee for regional development and a MEP from Poland, as quoted by Euractiv.sk.

The critical MEPs welcomed the initiative to fight high unemployment among young people but warned that the EC is not in a very strong position to decide about implementation steps and that final decisions about specific initiatives must be made by the countries themselves.

Prime Minister Iveta Radičová met with experts from the ministries responsible for drawing EU structural funds in mid February to discuss the possibilities of reallocating certain money from other operational programmes.

The Slovak representatives on the action team are drawn from the ministries of labour, economy, transport, agriculture and education, along with representatives from trade unions, employers and personnel agencies. The first meeting of the action team was scheduled for February 24, after The Slovak Spectator went to print, and its agenda included discussing specific projects to increase youth employment and deciding how much money from certain ministries will be spent on these projects.

The Labour Ministry believes that EU structural funds should be used for financial stimuli to companies that will support employment of young people as well as expanding various requalification programmes for young people who cannot find a job with their current skills.

Daniela Šulcová from the press department of the ministry told The Slovak Spectator that it has prepared a project called the National Frame of Occupations to define the needs of the labour market and the requirements companies expect from their future employees. The ministry representative said the project would not only help schools determine which occupations have a shortage of qualified applicants but also provide employers with better information about the qualifications of recent school graduates.

Páleník believes the funds from the EC should not be used for things like paying for recent graduates’ practical on-the-job training, terming it “a waste of money that does not contribute to the long-term employability of graduates”.

He suggested that graduates should be hired on full-time employment contracts with the EC money being used as financial assistance to an employer who hires a new graduate without past work experience.