TOMÁŠ Sýkora, a sixth-year medical student from Bratislava, has deep feelings of responsibility after spending three months helping children in Ethiopia. Though five months have passed since Sýkora returned from Africa, he instantly recalls Zanis, a little girl suffering from malnutrition who carried a plastic bottle tied into a scarf on her back to imitate carrying a baby. Sýkora, who participated in a programme battling malnutrition sponsored by St Elizabeth University of Health and Social Sciences, says the children of Ethiopia continue to inspire him and remind him of the privileges that physicians and patients have here in Slovakia. 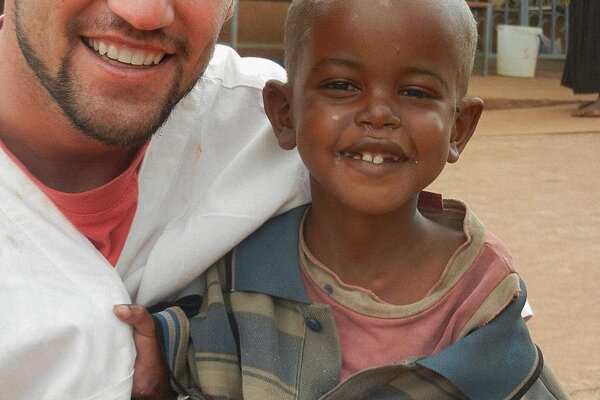 Tomáš Sýkora with one of his patients. (Source: Courtesy of TS)
Font size:A-|A+  Comments disabled

TOMÁŠ Sýkora, a sixth-year medical student from Bratislava, has deep feelings of responsibility after spending three months helping children in Ethiopia. Though five months have passed since Sýkora returned from Africa, he instantly recalls Zanis, a little girl suffering from malnutrition who carried a plastic bottle tied into a scarf on her back to imitate carrying a baby. Sýkora, who participated in a programme battling malnutrition sponsored by St Elizabeth University of Health and Social Sciences, says the children of Ethiopia continue to inspire him and remind him of the privileges that physicians and patients have here in Slovakia.

“We have relatively good technology and equipment here at our hospitals but in Ethiopia a doctor is left on his own and things that cannot be done without equipment will not be done at all,” Sýkora, a student at Comenius University’s School of Medicine, told The Slovak Spectator.

When asked about the adjustments he had to make while living in Ethiopia, Sýkora said that he needed to accept the African mode of life and not plan anything too far in advance.

“It is completely useless making plans two or three weeks in advance,” Sýkora said. “When I came to work in the morning a new day had started and I began everything all over again and the most important thing was to walk through that particular day.”

Sýkora spent three months at the Hospital of Mother Teresa managed by Missionaries of Charity in an Ethiopian town called Kibre Mengist, located 400 kilometres from the capital, Addis Ababa, in one of the driest regions of this east African country. The programme to combat malnutrition has been running since 2007 and provides local residents with free medical care as well as basic information for mothers about childhood nutrition. Sýkora’s patients were children suffering from acute stages of malnutrition who stayed in the hospital for about four weeks or until they had gained at least 2 to 3 kilograms.

“After five months the Ethiopian experience is still very strong in me,” Sýkora said, adding that he went there to provide whatever assistance he was qualified and able to perform in a country with an acute lack of physicians, and where so-called health officers regularly prescribe medicines for patients.

The Slovak Spectator spoke with Sýkora about his experiences, exploring how a stay like his in Ethiopia contributes to the professional and human maturing of a future Slovak physician.

The Slovak Spectator (TSS): How did you prepare for your trip?
Tomáš Sýkora (TS): When I look back, I don’t think there is any kind of preparation in Slovakia that would help prepare someone for life in Ethiopia or to figure out what to expect. Even though I heard stories from others who had travelled there and had some preconceived images, my arrival was a shock. The first two weeks were the most difficult. We did not have an interpreter right away who spoke English who could translate our words into the local language so we could not communicate with our patients. It was challenge to use our creativity and communicate with handsigns and symbols, which unfortunately did not have always the same meaning as in our culture. We did not really know which of our patients required immediate assistance so the takeoff of my work was a real challenge.

TSS: Many Slovaks have misconceptions about life in Africa. Did you manage to overcome them and how?
TS: We spent about 90 percent of our time with the locals and lived under very similar conditions to our patients: we ate what they ate, played with them where they played, and spent most of our time around them. There were some days when we went to restaurants but most of the time we lived just like regular Ethiopians, perhaps with the only difference being that we had hot running water, which of course makes a huge difference. Because the climate is very dry there people’s diets are very one-dimensional and children often suffer from kwashiorkor, an acute form of childhood protein-energy malnutrition that continues to affect children even if their food intake becomes normal. Another type of disease is marasmus, a severe form of malnutrition with evident signs of a lack of all nutrients.

TSS: Could you describe your regular day there?
TS: In early morning the screeches of huge ravens and the sounds of donkeys woke us up. Then we went to the hospital and at 8:00 started distributing milk to patients suffering from malnutrition. We worked there until noon and then had a break until 15:00 and then went back to work again. Officially, we had weekends free but we very often spent those days also at the hospital, which was usually just as busy as during weekdays. Working at the hospital was the reason we went there so we did not think about not having time to travel or enjoy the countryside. We had free time but we ended up scanning books and atlases of skin diseases so that we could recognise these on our patients because they could look very different from what we were taught in school in Slovakia.

TSS: What was the most demanding aspect of your stay?
TS: Whenever I realised that I knew how to treat a disease or handle a problem but could not find the available equipment or medicine. For example, providing a simple blood transfusion was a huge problem and children were dying because of that. No surgeries were performed in the region where I served. Those were the difficult moments: when I became fully conscious and I imagined that so little, I mean little measured by our conditions, would have been enough to really help. Once I had a one-year-old boy with high fever who was not responding to treatment and I wanted to give him an infusion but I could not find his vein because he was so frail. It was a very tough moment for me.

TSS: Based on what you have said, a stay like this advances the growth of a medical student.
TS: I authentically experienced the feeling of responsibility for a patient for the first time. I woke up thinking about my patients, I went for lunch thinking about my patients, and when I woke up at 3:00 in the morning, I again was thinking about my patients: what treatment to provide, what to do. Then there is also this sense of humbleness and respect towards a patient because you suddenly understand that a physician does not have limitless power and that your patient is not just a number in your calendar but someone who might stay in your mind for the rest of your life.

TSS: How did the Ethiopians relate to you?
TS: They had not seen many white people in this region so we were often called “ferenji”, which means foreigner in Ethiopian. They thought we were all from China. A peculiar experience was when unknown people at the market called me by my name. It was very kind and I did not mind it at all because it made me feel that I was part of their lives. But one also has to have a certain level of maturity and balance to understand these things. We played with the children on the streets and tried to take life as it normally unfolded there.

TSS: You were most frequently with children. Are Ethiopian children different from children in our region?
TS: They are such little inventors. The little girls are very funny and maybe they play the same games everywhere. For example, they put oranges or even medicine boxes under their dresses to imitate breasts. Girls here have fancier toys while there they are playing with plastic bottles. I will always remember Zanis, who had come to the hospital with her mother who also had twins. Zanis wrapped a scarf around her waist and back and put a plastic bottle in there as though she was carrying a baby. The most common toy was a hoop that the children chased with a rod. I remember seeing this played in movies from the times of my grandparents but it is still their favourite toy.

TSS: Is this experience a lasting one? What is the main message you would like to share with your peers?
TS: I have seen with my own eyes that money is very important in terms of helping countries that are ailing – but that alone is not enough. Sometimes you can make a change simply by going to these places and doing what you are best at. Of course, this is an idealistic approach because one needs to be able to offer what the people actually need. But still, the idea of voluntarism is not that widespread in Slovakia and people need to understand that even if they do not have extra money they can help when they offer their volunteer work. It is not always money that Africans need the most but investment in the form of human capital. If there are people involved with projects you can do quite a lot; but if there are projects without people then you cannot do much. But Africa is certainly not for everyone.