THE PERSONS and transactions appearing in the Gorilla file are based on reality but the context of those meetings is not true, said Jaroslav Haščák, a co-owner of the Penta financial group whose name is frequently featured in the file, which includes alleged transcripts of conversations covertly recorded by Slovakia’s SIS spy agency in 2005 and 2006 involving Haščák and several Slovak political figures. 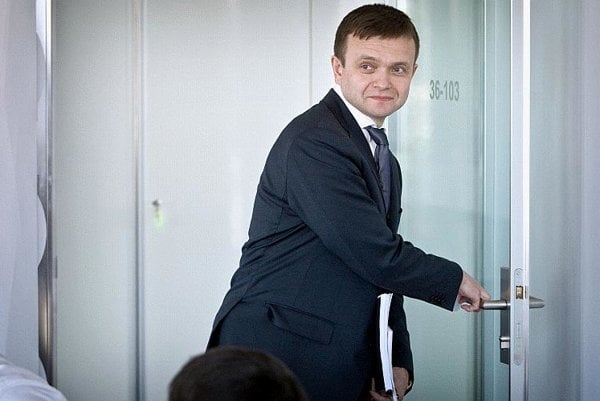 THE PERSONS and transactions appearing in the Gorilla file are based on reality but the context of those meetings is not true, said Jaroslav Haščák, a co-owner of the Penta financial group whose name is frequently featured in the file, which includes alleged transcripts of conversations covertly recorded by Slovakia’s SIS spy agency in 2005 and 2006 involving Haščák and several Slovak political figures.

“We have not corrupted any politician or public figure as the financial group had no reason to be involved in corrupt activities,” Haščák said on February 24 when answering questions from a selected group of print journalists for the first time since the file emerged in December 2011.

Haščák met journalists from the Sme, Pravda, Hospodárske Noviny and Nový Čas dailies, the Reuters and Bloomberg newswires, and the Trend weekly and Forbes monthly magazine under the condition that no video or audio recording would be published, Sme wrote in its article after the press briefing.

Haščák’s name appears in the Gorilla file in connection with conversations he allegedly had with senior government officials and politicians of the ruling coalition in 2005-6 as well as with a representative from an opposition party. Haščák told the journalists that the conversations reported in the file are not true and in answering a journalist’s question whether “Gorilla is a mixture of real surveillance and fiction” he responded that “perhaps this is how I would describe it”, Sme wrote.

Interior Minister Daniel Lipšic from the Christian Democratic Movement (KDH) confirmed on January 19 that an intelligence operation with the Gorilla codename actually existed and said it had been undertaken legally by the Slovak Information Service (SIS), the country’s primary intelligence agency. Lipšic said serious suspicions of corrupt activities by certain financial groups and other persons in 2005 and 2006 were documented through these intelligence activities, the SITA newswire reported.

Political ethics watchdog groups, public figures and citizens joining in street rallies to protest against what the organisers call high-level political corruption, have been demanding a thorough investigation of the information reportedly contained in the Gorilla file.

The Gorilla file published on the internet indicates that meetings at an SIS-monitored apartment on Vazovova Street in Bratislava were held between Haščák and various public figures, including Anna Bubeníková, a nominee of the Slovak Democratic and Christian Union (SDKÚ).

Bubeníková was sacked from her top job at the National Property Fund over concerns that she served as go-between for Haščák and the Penta group with government officials. Former economy minister Jirko Malchárek, a nominee of the now-defunct Alliance of a New Citizen (ANO) party, and Smer leader Robert Fico also reportedly had meetings in this apartment with Haščák. The Gorilla documents reportedly show that various transactions involving the state were discussed during meetings at the site and that Haščák also tried to influence personnel decisions at the Economy Ministry.

Haščák told the journalists that he had visited this apartment only twice as its owner, Zoltán Varga, is his friend. Haščák also said that Malchárek has been his friend and he did not have to meet him in “some conspiracy apartment” since they regularly met each other in their own homes, Sme reported.

Haščák told the journalists that Penta had been covertly monitored since the company started in business and that he has seen “tens of analyses that pertained to Penta that had originated within SIS”.

On January 24 Bubeníková denied meeting Penta representatives at the apartment as described in the Gorilla file, or at any other non-public place and stated, as quoted by Sme: “I have never in my life been at the alleged conspiracy apartment.”

To a question from the journalists about the reported meeting with Fico, Haščák responded that no such meeting had taken place, Sme wrote.

Smer has stated that “since the name of Robert Fico, unlike some right-wing leaders, has not appeared in the document in a context that would disqualify his participation in politics” the party believes further questions regarding Fico are an effort to drag him into a situation that only involves the second government of Mikuláš Dzurinda.

In early February the Bratislava I District Court issued an preliminary injunction blocking the publication of an unfinished book about alleged high-level political corruption being written by investigative journalist Tom Nicholson, a former editor-in-chief of this newspaper. The court issued its injunction in response to a request submitted by Haščák and Penta.

Prime Minister Iveta Radičová called the court’s decision a violation of the right to free speech saying “it [the book] is not Mein Kampf”.

In the interview with reporters conducted on February 24 Haščák said that Penta does not intend to withdraw its request to the court to block publication of the book. The hnonline.sk website also reported that Penta has contacted the firm in the United States which owns the domain where the Gorilla file is available and is seeking to find out who uploaded the file.