VOTING is a basic right of citizens that gives them a say in choosing their elected officials, according to Nikolas Trendowski, consul at the US Embassy in Bratislava, in explaining why he believes it is important for US citizens to vote even when they are living abroad. 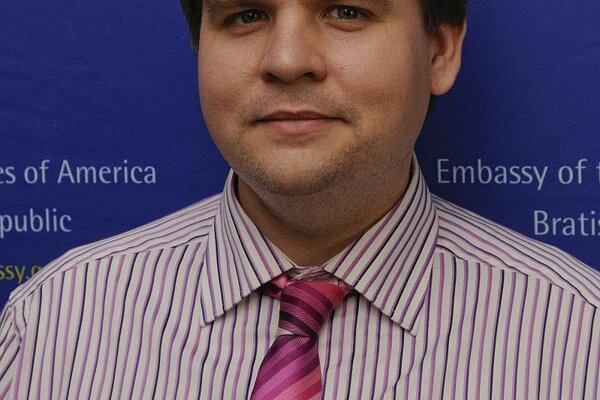 VOTING is a basic right of citizens that gives them a say in choosing their elected officials, according to Nikolas Trendowski, consul at the US Embassy in Bratislava, in explaining why he believes it is important for US citizens to vote even when they are living abroad.

“I remember one of my teachers saying years ago that it’s like a legal revolution every four years,” Trendowski told The Slovak Spectator, adding that there is no reason not to exercise that right regardless of where someone is living. “American society is now more mobile than ever before and hundreds of thousands of American citizens live overseas, including those who were born overseas. Every one of them 18 years and older can vote in US elections if they register.”

The Slovak Spectator spoke to Trendowski about how the absentee voting system works in the US and whether some aspects of that system could be used to increase the number of Slovaks who vote in their national elections while living abroad.

The Slovak Spectator (TSS): How do American citizens vote in elections when they are not physically present?
Nikolas Trendowski (NT): US citizens living overseas can register and vote using the Federal Post Card Application (FPCA). There’s been a real improvement in the system, which used to be very paper-based. In 2009 Congress passed the Military and Overseas Voter Empowerment or MOVE Act to simplify absentee registration and the voting process and to increase access to voting materials electronically via the internet and e–mail. The Federal Voting Assistance Program, www.fvap.gov, has the forms and information most overseas voters need. What’s most important is that to exercise the right to vote, Americans must register every year. This is even if they have voted from abroad before. Voters must send a new registration post card if they change names, mailing addresses or e-mail addresses as well. Many states will now accept registrations electronically or by e-mail.

TSS: About what percent of US citizens use this method of voting? Are there statistics showing the turnout of absentee votes based on where they live?
NT: Statistics from the last general election that included the 2008 Presidential election indicate that Americans abroad requested over 989,000 ballots. However, only 680,000 were returned to be counted. We don’t have a breakdown by country. So there’s interest, but perhaps it was hard to get the ballots back on time. Lots of states didn’t meet the 45-day standard for mailing ballots to overseas voters so maybe many people didn’t get them in time to complete them and mail them back by election day. That has happened to me in the past; I’d get the ballot a few days before it needed to be back in the US. There was no way I could return it in time. This year it’s different because of the new law. Now nearly all states allow voters to receive ballots by e-mail, eliminating postal delays. We estimate that between 1,500 and 2,000 Americans are in Slovakia at any given time and we hope that many of them will register (if they have not already) and vote. It’s easier than ever and the embassy is happy to help.

TSS: How does the American absentee voting system work?
NT: When you are living in the US it’s just like most countries – on election day citizens who are registered to vote go to their polling place and make their choices. If a registered voter can’t make it to the polling place because of age, sickness, or a trip out of town, or if he or she lives abroad, then there are absentee ballots. In the old days, the election commission in an American’s home city or state, or the last place he or she lived, sent a paper ballot to the absentee voters. Election officials still mail out these paper ballots. But now most states also offer them by e-mail or by fax. So now, it’s much easier to return them because voters abroad get the ballots faster and are much more likely to return them on time. US citizens abroad must register each year in order to vote as absentee voters. It’s best to do this as early in the year as possible. Before, citizens had to register each time to get ballots for every election. Now, one registration covers the entire year. Deadlines vary by state, but in general people must register and the ballot must be returned by Election Day. Especially in presidential election years, some primaries (the first round of elections) are very early. Some have already been held this year. The general election, which this year includes the presidential election, is on November 6. Voters abroad can fill out a blank voting form, also available online, and mail it back if they know who they want to elect and they did not get the ballot from the US in time. Voters can mail ballots through local mail or bring them to the embassy where we will mail them. If voters use a special envelope template it is then free to mail the ballot through the embassy system.

TSS: Can US citizens vote online?
NT: Not quite. No place in the US yet has fully-online voting. The fastest way to get an absentee ballot is to request an electronic ballot. Depending on the specific rules of each voter’s home state, delivery may be made by fax, e–mail, or by an online download. Remember again that though they are similar, the states – all 50 of them – have different rules on voting. It’s important to check at www.fvap.gov for the particular state that a US citizen calls home. When someone registers to vote, he or she can request electronic delivery of the ballot in most states. On the FPCA an absentee voter ranks his or her ballot delivery preference – e-mail, fax or regular mail but you must not forget to include your email address or fax number. If a voter does not choose, the ballot is mailed via regular postal service.

TSS: How could Slovakia increase the voter turnout among Slovaks living abroad?
NT: I’ve seen many different methods of voting abroad. Sometimes election officials even travel all the way to different countries to oversee the citizens voting there. Many people prefer to be able to go to their embassy and vote. This is an option the US does not offer. However, it may be difficult for people outside major world capitals to make it to an embassy to vote. E-mail ballots would be one way to increase turnout, as we hope it will for this year’s US presidential elections.