POLITICAL parties have been fishing for voters in this election campaign by promising to create new jobs, provide ‘social certainties’ and fight corruption. Watchdogs and think tanks who have taken advantage of the campaign to scrutinise the political platforms of the political parties, say that they tend to offer promises rather than specific measures to fulfil them. But while the parties may have a strong sense of what might click with voters, the watchdogs have more specific ideas about what is needed to improve the state of public affairs and politics in Slovakia. 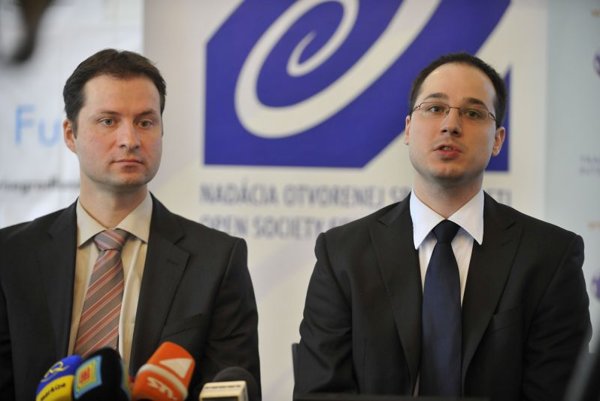 POLITICAL parties have been fishing for voters in this election campaign by promising to create new jobs, provide ‘social certainties’ and fight corruption. Watchdogs and think tanks who have taken advantage of the campaign to scrutinise the political platforms of the political parties, say that they tend to offer promises rather than specific measures to fulfil them. But while the parties may have a strong sense of what might click with voters, the watchdogs have more specific ideas about what is needed to improve the state of public affairs and politics in Slovakia.

“The next government should focus on reform of the financing of political activities, on depoliticising the state administration and state companies, and on increasing accountability in the judiciary and the prosecution service,” Gabriel Šípoš from Transparency International Slovensko (TIS) told The Slovak Spectator.

Based on scrutiny of their political programmes, TIS said that the fight against corruption remains an important issue only for the centre-right parties, as was the case during the elections in 2006 and 2010.

TIS, in study entitled Anti-Corruption Minimum that assesses the state of corruption in Slovakia, suggests remedies to address it and evaluates the parties’ election programmes, reported that the best programmes were written, as in 2010, by Freedom and Solidarity (SaS) and the Slovak Democratic and Christian Union (SDKÚ). The watchdog also commended policies set out by the Christian Democratic Movement (KDH) and Ordinary People and Independent Personalities (OĽaNO), describing them as well-designed.

“All these [parties], when fulfilling their election programmes, would have a real chance of installing useful, systemic solutions, mainly in the completion of judicial reform, reduction of bureaucracy and … increasing the transparency of the public sector by providing data on its functioning via the internet,” Šípoš wrote in the study.

According to Šípoš, the most popular political party, Smer, mentions anti-corruption measures in its programme only in passing. Moreover, the party opposes the judicial reforms which many experts consider to be among the best measures pursued by the outgoing government.

The parties in general have focused most on limiting space for corruption in the judiciary and in business, and have devoted less attention to measures addressing local administration and party financing activities.

TIS evaluated several areas where the problem of low transparency or potential for corruption appears repeatedly, such as in the judiciary, the prosecution service, the police, the business sector with respect to public procurement, political-party financing, politicians’ assets, the politicisation of the public sector, and regional authorities.

The SDKÚ states that it will support joint public procurement for the Defence and Interior Ministries in order to save significant amounts of taxpayers’ money. The party says that separate procurement of police and army equipment unnecessarily inflates state expenditure. The party also promises to provide access to public databases, and says every exemption justified on grounds of confidentiality or personal data protection will have to be thoroughly justified.

“Policemen should not receive fines and fees in cash from citizens; in this manner the space for corruption will rapidly decrease,” SaS states in its programme, adding that introducing electronic transfers between citizens and the police would help to achieve this goal. SaS would also seek an end to political nominations at tax offices and a new system of remuneration for managers at state-run companies.

Similarly, Most-Híd is proposing, among others policies, a project called “Transparent City” to be applied in the highest possible number of cities in Slovakia, which would involve electronic auctions as well as the definition of positions in the state administration which would be filled through public competition.

The KDH says it will aim to increase transparency in public spending while improving business conditions through the removal of administrative barriers. It also proposes a system of voluntary licences with a basic licence conditional on a maximum turnover. The KDH also proposes a specific law to protect and reward whistleblowers and those who report corruption, TIS reported.

OĽaNO, among others, said it would push for changes to the property reports of political parties in such a way as to make it clear whether year-on-year increases in property match officially declared income. The party also said it will advocate personnel stability at state offices and eliminate the practice of political nomination.

Smer’s programme, as quoted by TIS, suggests that it “will re-evaluate the unconstitutional interventions in the judiciary taking place in 2010, which were aimed at political interference in the operation of the courts and prosecution service through the executive power”. Smer also promises to approve new legislative and technical tools that will significantly help to investigate corruption cases.

The economy and public finances

Consolidation of public finances and Slovakia’s credibility in global financial markets, plus halting the decline in Slovakia’s competitiveness and its health-care sector are the main challenges that the next government faces, according to the Institute of Economic and Social Studies (INESS), an economics think tank.

INESS, which also assessed the parties’ election programmes, suggested that they have almost completely ignored the issue of the position of Slovakia within the European Union and the eurozone in association with the zone’s ongoing fiscal centralisation and the expanding authorities of European institutions.

The think tank suggested that in several evaluated areas the parties lean towards the use of general phrases rather than specific measures that would in the short term lead to a balancing of the budget without reliance on economic growth. However, the possibility of economic stagnation presents the most severe risk to consolidation in the next election term, the INESS report noted.

Not a single party quantified the fiscal impacts of particular measures and without these estimates a voter cannot assess their meaning, INESS stated. It said that, as a result, comparison of the election programmes is very complicated.

“The voter is in the position of a driver who has to pick a car on the basis of the brand and the colour, and not the car’s driving characteristics,” INESS wrote.

Nevertheless, SaS and the SDKÚ bring the best, though not altogether comprehensive, solutions in the public-finance sphere, getting a grade 2 in the five-grade system applied by INESS. The lowest grade in this area went to 99 Percent – Civic Voice and the Slovak National Party (SNS). SaS is the best performer according to INESS, with grades of 2 in the areas of business environment and employment, and in health care. 99 Percent and SNS were also at the tail-end in both fields.

Via Iuris, an NGO focusing on law, compared what the political parties have offered in terms of judicial reform.

SaS considers personnel aspects of the judiciary to be the most problematic area, listing the selection of new judges, their education and personal character, and the ability to dismiss them as priorities. The KDH also suggests personnel changes in the judiciary, while the SDKÚ emphasises the ethical dimension of judges’ performance. Smer states in general terms that it intends to bring Slovak judges’ legal status into line with that of their international counterparts.

The continuance of judicial reforms initiated by the Ministry of Justice under Lucia Žitňanská is supported by the SDKÚ and OĽaNO. Smer, by contrast, describes the Radičová government’s judicial reforms as “unconstitutional interventions,” Via Iuris notes.

The speed of judicial proceedings, the introduction of technology at courts and upgrading the equipment used by judges are a key concern for almost every political party with the exception of OĽaNO, according to Via Iuris.

Only SaS deals with the issue of disciplinary proceedings, making three proposals for partial changes. All the parties, again with the exception of OĽaNO, deal extensively with the speed of judicial proceedings.

“Considering the critically low level of trust among the Slovak public in the judiciary, we do not consider the equipment of judges and the duration of proceedings to be the most serious problem,” said Zuzana Čaputová from Via Iuris, adding that political parties have dedicated significantly more attention to these themes instead of issues like the responsibility of judges and judicial ethics.