“I HAD a secret dream of one million voters, which we have achieved,” said Smer leader Robert Fico, after it became clear that his party had won a clear majority in Slovakia’s March 10 general election. Its 1,134,280 votes meant Smer attracted 44.4 percent of the vote and thereby won 83 seats in the 150-seat parliament, a majority of 16 over all other parties. It is the first time since the end of communism in 1989 that any single party has enjoyed a majority in the Slovak parliament. 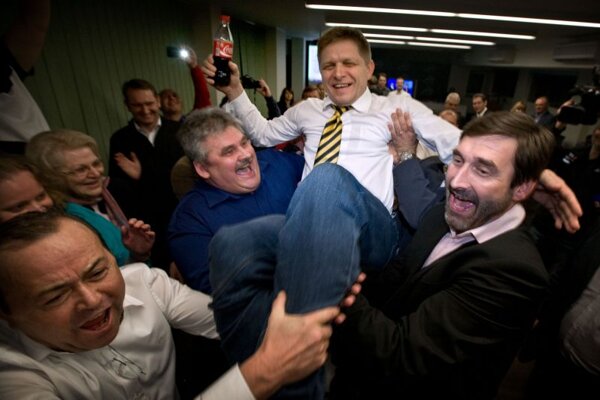 The dream of Robert Fico, the leader of the Smer party, in opposition since 2010, was fulfilled on March 10: his party received over one million votes and will now be able to form a government on its own. (Source: Sme - Tomáš Benedikovič)
Font size:A-|A+  Comments disabled

“I HAD a secret dream of one million voters, which we have achieved,” said Smer leader Robert Fico, after it became clear that his party had won a clear majority in Slovakia’s March 10 general election. Its 1,134,280 votes meant Smer attracted 44.4 percent of the vote and thereby won 83 seats in the 150-seat parliament, a majority of 16 over all other parties. It is the first time since the end of communism in 1989 that any single party has enjoyed a majority in the Slovak parliament.

Turnout was considerably higher than expected, with over 59 percent of eligible voters casting ballots. Pre-election estimates by political analysts had forecast that turnout could fall below 50 percent.

Five other parties cleared the 5-percent threshold required to win seats in parliament – but only just: none of them won more than 9 percent. Almost tied for second place, on 8.8 percent and 8.6 percent respectively, were the Christian Democratic Movement (KDH) and Ordinary People and Independent Personalities (OĽaNO). Then came Most-Híd on 6.9 percent, followed by the Slovak Democratic and Christian Union (SDKÚ) on 6.1 percent and Freedom and Solidarity (SaS) on 5.9 percent.

By the time The Slovak Spectator went to print, late afternoon on March 11, the country’s statistics authority, the Slovak Statistics Office had not officially confirmed these preliminary results. But providing they stand, these percentages would give the KDH and OĽaNO 16 seats each, Most-Híd 13 seats, and the SDKÚ and SaS eleven seats each.

None of the other 20 parties running in the election won more than 5 percent, although the Slovak National Party (SNS) and the Hungarian Coalition Party (SMK) came closest, with 4.6 percent and 4.3 percent respectively.

99 Percent – Civic Voice, a new party which ran a lavish billboard- and TV-advertising campaign in the run-up to yesterday’s vote and attracted considerable attention when it scored more than 5 percent in some pre-election polls fared poorly in the real vote, scoring less than 2 percent.

Despite Smer’s clear victory, Fico said he would still initiate coalition talks with those parties that were willing to accept the priorities of his own party, which he defined as “building a socially-oriented state and solidarity”. He said he planned to summon a roundtable for all parliamentary parties but “if the parties reject us, there will be no reason to waste time”. If there is a party willing to cooperate with Smer, Fico said, his party would approach it as a partner, the SITA newswire reported. Fico also said that Smer intends to debate constitutional laws with the opposition.

SDKÚ much diminished, scrapes into parliament

The election result represents a heavy defeat for the right wing, said long-serving SDKÚ chairman Mikuláš Dzurinda, whose own party suffered the heaviest blow. Its support plunged from 15.4 percent in 2010 to 6.1 percent, leaving it only just clear of the critical 5-percent threshold.

In a political talk show broadcast by private broadcaster TV Markíza the morning after the election, Dzurinda admitted that the number of preferential votes he personally had received also represented a defeat. One of his party vice-chairs, Lucia Žitňanská, who said before the election that she would seek the leadership if she received enough preferential votes, collected 103,517, the highest number of any SDKÚ candidate, while Dzurinda attracted only 27,242.

While remaining tight-lipped about his next move, Dzurinda said that talks in the upcoming days would decide the future of his party, which until this election had, for a decade, been the largest party on the right.

However, Dzurinda denied that his party was set to share the fate of the party of another former prime minister, Vladimír Mečiar, whose Movement for a Democratic Slovakia (HZDS), which dominated Slovak politics in the 1990s and was in government as recently as 2010, was consigned to political oblivion on March 10, when it attracted less than 1 percent of the vote.

The joint-second largest party in the next parliament, the Christian Democratic Movement (KDH), is ready to discuss working with Smer, its chairman Ján Figeľ said, but he added that the election result represented an unambiguous decision by the voters and that the country would need a constructive opposition.

“We will discuss factual issues, but the results of the elections are so unambiguous that we respect the decision of the voters and it is now up to Smer to carry out [the will of the voters],” Figeľ told the TV Markíza talk show on March 11.

Figeľ also said that the political significance of this election was that it marked the victory of a single party and had ushered in rule by a single party.

Even though both Most-Híd and SaS have confirmed their willingness to negotiate with Fico, representatives of both parties also hinted that responsibility for governing the country now lies solely with Fico now. Before the election SaS ruled out any coalition partnership with Smer. Most-Híd leader Béla Bugár too said that his party is not interested in governing with Fico, who Bugár noted has enough votes to rule alone anyway. He also said that he did not think Fico would be pushing for a government involving Most-Híd.

The SDKÚ has long said that no vote cast for the party would lead to a coalition with Fico. However, Dzurinda also told Markíza that he would not rule out talking to Smer.

OĽaNO leader Igor Matovič said that the election results were not good for Slovakia and that in this sense they represented a disappointment for him. Nevertheless, Matovič’s party achieved the second best result among the right-wing parties.

Asked about the possibility of a coalition with Smer, Matovič said that Fico would have to search for a bride with the KDH or Most-Híd because his party was not interested.

Matovič also said, as quoted by TASR, that Slovakia had ahead of it four years of stealing, corruption, and the burdening of its children with debt. In opposition his party would keep a close eye on the thieves, he said.