THE RESULTS of the 2012 parliamentary elections proved that preferential votes can significantly affect the final list of elected MPs. Thanks to preferential votes some candidates, mostly from the centre-right parties, improved their lowly list positions and won seats in the new parliament. There were also instances of candidates improving their positions by several places but still failing to win seats. 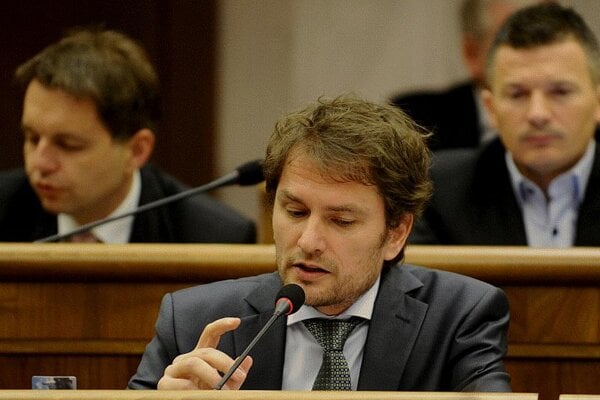 Igor Matovič will return to parliament thanks to the preferential votes he received. (Source: TASR)
Font size:A-|A+  Comments disabled

THE RESULTS of the 2012 parliamentary elections proved that preferential votes can significantly affect the final list of elected MPs. Thanks to preferential votes some candidates, mostly from the centre-right parties, improved their lowly list positions and won seats in the new parliament. There were also instances of candidates improving their positions by several places but still failing to win seats.

“It is obvious that this institution [preferential voting] has mixed the order of several parties and confirmed its legitimacy again,” Martin Slosiarik, director of the Focus polling agency, told The Slovak Spectator.

Under electoral rules, voters may circle the names of up to four candidates on the slate of the party they vote for. Any candidate who polls more than 3 percent of their party’s overall votes is moved up their party list to reflect their relative standing.

The most preferential votes went to the chair of the winning Smer party, Robert Fico, who received 762,360 votes. He was followed by his party colleagues Robert Kaliňák, with 485,594 preferential votes, and Pavol Paška, with 273,540, according to the official election results.

The biggest leaps were recorded by the four original candidates of Ordinary People and Independent Personalities (OĽaNO), including party leader Igor Matovič, who all made it into parliament thanks to preferential votes despite occupying the bottom four spots on party’s list. In doing so they repeated a feat they had first accomplished in the 2010 elections, when they appeared in the final four positions of the Freedom and Solidarity (SaS) party list. Matovič received the highest number of preferential votes of any centre-right leader: 150,251 people.

Slosiarik, as well as Pavel Haulík from the MVK polling agency, said that preferential votes helped Igor Matovič and his three colleagues the most. Haulík explained that the list of politicians elected to represent the new OĽaNO party was based largely on preferential votes as it is not “a standard, classic parliamentary party, but some kind of free grouping of virtually independent candidates”.

“From this point of view it is thoroughly clear that for this party, this political subject, the influence of preferential votes was the most significant,” he added.

In terms of support for centre-right leaders, Matovič was followed by the chair of the Most-Híd party, Béla Bugár, who picked up 121,414 votes, while the chair of the party with the second highest result in the elections, the Christian Democratic Movement’s (KDH) Ján Figeľ, ended fourth after being pipped by his party colleague Daniel Lipšic. Both received just under 105,000 preferential votes.

There were also some changes in the order of the top candidates for the Slovak Democratic and Christian Union (SDKÚ). The number three on the slate, outgoing Justice Minister Lucia Žitňanská, received more than 103,517 preferential votes and surpassed the first two men on the slate, party leader Mikuláš Dzurinda, who received just over 27,200 votes, and outgoing Finance Minister Ivan Mikloš, with nearly 56,800 preferential votes, according to the official results.

Haulík said that Dzurinda’s low number of preferential votes was nothing new, since he received fewer than Mikloš and Iveta Radičová in the 2006 parliamentary elections.

“Dzurinda is not a very popular person at the moment, or over the last few years, even among SDKÚ voters,” Haulík told The Slovak Spectator, adding that his low numbers were “a clear signal that he has already exhausted his potential”.

There is no comparable number from the 2010 elections since Dzurinda stepped down from the SDKÚ list after Smer accused the party of dubious financing in the run-up to the election.

Some in, others out

In terms of re-ordering further down the various party lists, preferential votes helped, among others, activists Alojz Hlina, who moved up three places on the OĽaNO slate, and Štefan Kuffa, a hospice director from the village of Ľubica near Poprad, who improved his position on the same slate by seven places. Andrej Hrnčiar, the mayor of Martin, improved his position on the Most-Híd party list from tenth to seventh place.

One new MP who not only moved up his party’s slate but got into parliament thanks to preferential votes was Jozef Mikloško of the KDH, who jumped from 34th to eighth position.

MPs who retained their seats in parliament thanks to preferential votes included Miroslav Beblavý from the SDKÚ, Juraj Droba – who squeaked home, rising from 22nd to 11th position on the SaS list after winning 3.02 percent of the party’s preferential votes – and Peter Osuský, a member of the Civic Conservative Party (OKS) faction, who was elected as an MP for SaS this year, having been elected in 2010 on the slate of Most-Híd. He improved his position on the SaS slate by six places.

Several members of the outgoing government will appear among the opposition deputies in the new parliament. Outgoing Labour Ministry State Secretary (i.e. deputy minister) Lucia Nicholsonová rose from 11th to seventh place on the SaS slate thanks to preferential votes, while outgoing Environment Minister József Nagy rose from 14th to fifth position on the Most-Híd slate, thus becoming one of the party’s 13 MPs.

Haulík said that individual candidates receiving a high number of preferential votes depended on the public having an awareness of them running in the election.

“Many politicians were running their own campaign [for preferential votes],” Haulík told The Slovak Spectator, adding that though some of these politicians did not make it into parliament, the reason for this was often the low overall vote that their party received.

At the other end of the scale, some MPs from Smer, the majority of whose list now find themselves in parliament, were elected despite attracting very few preferential votes. The joint ‘winners’ in this category were Maroš Kondrót and Daniel Duchoň, who each received only 682 preferential votes. This number still represents a minor triumph for Kondrót, a sitting MP and occupant of the relatively senior number 31 slot on Smer’s list, as he was elected to the last parliament with only 642 preferential votes.

But the wooden spoon for preferential votes goes to Party of the Democratic Left (SDĽ) candidate Marian Papp who, according to Statistics Office data, was the only candidate in the elections not to receive a single preferential vote – suggesting he did not even vote for himself.