Art as an investment opportunity

SECURITIES and real estate are not the only commodities into which people can ‘deposit’ their money or from which they can profit. Art works, archive wines, stamps, antiques or diamonds can also be used for these purposes. Interest in making less conventional investments such as these has been growing in Slovakia, and recent economic turbulence has even tended to boost such trends. Banks and other financial firms cooperate with auction houses as well as with art experts to secure the best possible art investments for their clients. But while interest is growing, it has not reached levels commonly seen abroad. 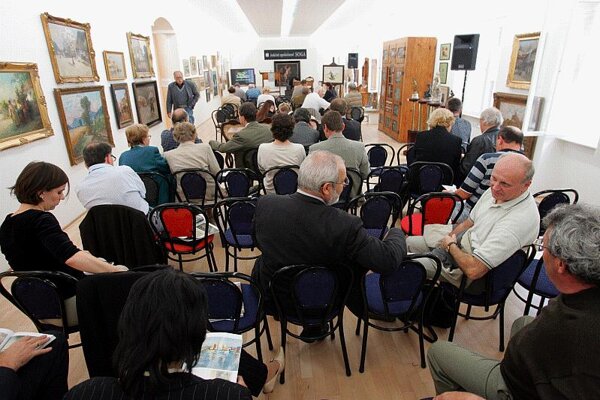 SECURITIES and real estate are not the only commodities into which people can ‘deposit’ their money or from which they can profit. Art works, archive wines, stamps, antiques or diamonds can also be used for these purposes. Interest in making less conventional investments such as these has been growing in Slovakia, and recent economic turbulence has even tended to boost such trends. Banks and other financial firms cooperate with auction houses as well as with art experts to secure the best possible art investments for their clients. But while interest is growing, it has not reached levels commonly seen abroad.

“Art is beginning to be perceived as an investment opportunity in Slovakia while simultaneously being a very fashionable thing,” Ján Kováč from Across Wealth Management told The Slovak Spectator, adding that in the past there was an art market in which collectors were primarily buying art works for the sake of possessing the work itself and not for the sole purpose of making an investment.

But the circle of participants at auctions has lately been growing to include buyers whose main aim is to use the increase in the value of art works to make their money grow.

Banks in Slovakia, which along with traditional financial services also provide private banking services, confirm the increasing interest in these specialised services.

“The interest of clients is growing, but when compared with abroad, it still does not reach standard levels,” Peter Guľvaš, director of the private banking department at VÚB told The Slovak Spectator, adding that this is understandable due to limited access to information and education in this area before the fall of the communist regime.

The basic rule when investing into art or other less traditional commodities is an appropriate volume of investment and a long-term horizon, Guľvaš explained, adding that since such commodities are traded sporadically their prices may fluctuate and their value may only increase later compared to common investments. Additional storage and authentication costs can also be incurred. Works of art are mainly acquired with the intention of keeping them within the family for future generations. According to Guľvaš, the volume of art works purchased should not exceed 10 percent of a client’s investment portfolio.

Kováč sees an aesthetic advantage in investing in art and in the collector’s appreciation of this commodity, whose value can remain the same or even grow during an economic downturn.

UniCredit Bank Slovakia regards investing in art works as a diversification of assets in terms of type as well as duration. The bank, for example, sells silver and gold coins minted at the Kremnica mint as limited editions and Zuzana Ďuďáková, spokesperson of UniCredit Bank Slovakia, confirmed a growing interest among clients.

Auction houses in Slovakia confirm the growing interest in art as an investment commodity, and say the recent economic crisis has even boosted this interest. They report an increase in the purchase of works of art among both Slovak and foreign clients, adding that the scope of interest is very varied. But they say the collecting and investment aspects cannot be distinguished as they are inseparable.

“Even when it looks as if someone is buying a painting because they like it, in their subconscious at least they’re pondering the commercial reputation of the author and the adequacy of the price,” Ján Abelovský, the executive director of the Soga auction house, told The Slovak Spectator.

He confirmed that the crisis years have brought a flourishing art trade in Slovakia, with turnover at auctions as well as prices soaring to new record levels. Abelovský sees two reasons for this.
The first is that art works from private properties have come on to the public market, which would not have happened had it not been for the crisis. The second reason is that awareness of the advantages of investing in art has increased significantly compared to the past.

Michal Volčko from the Art Invest auction house cited examples of clients, who, after the price of real estate decreased, took all of their money from banks and invested it into art. Pavol Weiss from White & Weiss auction company mentioned a collector, who acquired shares at Erste Bank at CZK820 per share and an oil painting by Mikuláš Galanda for €115,000 at the same time last year.

“Erste is now below CZK500 and he has already received an offer of €125,000 for the Galanda painting,” Weiss told The Slovak Spectator. “But I recommend acquiring the works of young artists; there is bigger potential in them.”

Individual auction houses have their preferences but in general they recommend works representing Slovak modernism, especially those by Martin Benka, Ľudovít Fulla, Miloš Alexander Bazovský, Zolo Palugay, Galanda as well as Rudolf Krivoš, Milan Laluha and Vladimír Kompánek, to name but a few. However, Volčko warned that in some cases, works by these artists are already being offered for borderline prices with no short-term growth prospects.

Abelovský mentioned local conceptual art from the 1960s as having potential.

“Prices for [the works of] prominent artists of this movement are still at the beginning of this dramatic growth,” said Abelovský.

With regards to young artists who have not been ‘discovered’ yet, Volčko said that it is very difficult to say which artists have potential from the investment point of view. But Weiss points out that by purchasing works by contemporary artists, investors or collectors are supporting contemporary art as well as avoiding problems with authenticity.

“Slovakia does not have a tradition of [art-work] collection,” said Weiss. “Just decades ago Slovakia was an agrarian country without any middle, intellectual or business class, whereas in the neighbouring Czech Republic a prominent collecting society existed. The tradition of collecting has only come about in the last 10 years. The number of enlightened businesspersons and managers who understand art in wider contexts, not only as an investment, is growing.”