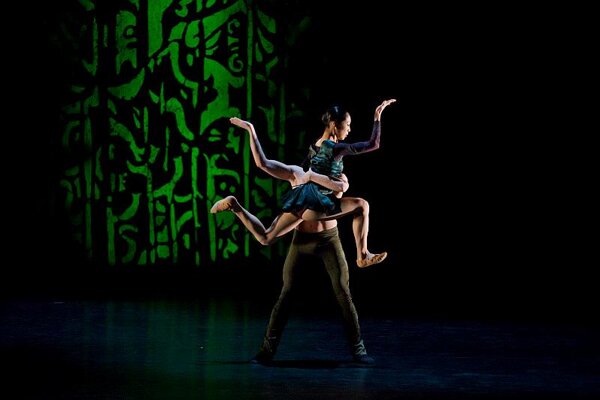 “This is a worldwide premiere of this combination – as far as I know,” Scholz’ assistant Ivaylo Iliev told a press conference two days before the piece’s opening.

He congratulated the head of the SND’s ballet section Andrii Sukhanov for his selection.

Duo consists of Duato’s shorter work Duende, set to music by Claude Debussy (Clair de Lune) and Debussy/Ravel (Danses pour harpe et orchestre a cordes); and Scholz’ longer Second Symphony, set to music of the same name by Robert Schumann. Duato participated in the press conference, too, as he did at the premiere on March 3.

Unfortunately, Scholz died in 2004, but Iliev is one of just four assistants authorised to oversee his work and the use of his choreographies around the globe. Both parts of the evening were neo-classical choreographies close to “pure dance”, i.e. without any story or plot, expressing solely the charm of classical music.

The choreographies are over 20 years old, but have a timeless quality. Duato opined that Duende was a good place for dancers to get acquainted with his work and his dance vocabulary. He said that he tended to leave his choreographies the way they were created, not “fiddle with them”, adding that he preferred to avoid potential mistakes in his future choreographies but left them in the original ones. “It is very nice for me to see all the mistakes I have made, in the moving. It is like with ladies who undergo facial plastic surgery – let the ladies and the choreographies grow old in a natural way.” He cited nature as the inspiration for Duende, in particular its hidden places:
behind a tree, under a leaf, within a drop of water.

Duato also stressed the work of choreographers’ assistants, without whom the works of some authors, living as well as deceased, could not be performed in so many places, as the authors of choreographies usually insist on a certain interpretation of their work, but are not physically able to oversee all rehearsals and training sessions. He praised his assistant, Catherine Habasque, who did the bulk of the drill, while he personally came to participate in a dress rehearsal on the Thursday, two days before the premiere, and to fine-tune the choreography for the Saturday and Sunday evenings.

In case of Scholz, his works could probably not be danced at all were it not for his official assistants.

The dances are very demanding for performers (and most demanding, of course, for those who were dancing in both parts), Iliev said, praising the very young and eager SND team. Barbora Kubátová, a soloist in both pieces, said it was a very enriching experience, adding that Duende was rather a modern perception, while Scholz’ Second Symphony was closer to classical ballet.

The stage had quite a minimalist design, with all the lights and attention focused on the dancers. In the first part, all performers were “half naked”, the men with bare chests and the women bare legs, thus creating an intriguing contrast. In the second part, it was not the design but rather the attractive blue colour of the dancers’ costumes that drew the attention of the audience, enhancing the dreamy, even meditative mood.

But the main focus stayed on the music itself, which was not so much the inspiration but rather the unforgettable companion and guide throughout the evening.

As for the choice of these choreographies for the National Theatre’s repertory, Sukhanov said: “Apart from dating back to about the same period – the beginning of the 1990s – the names of both authors rank among the top representatives of the art of dance not only in Europe, but also worldwide.” He added that he believed a repertory of a “classical, i.e. big-scale, national”
theatre should comprise all possible genres and tendencies, from classical dance, through neo-classical and dramatic, to modern dance.

Both Duato and Iliev expressed hopes for future cooperation with the SND, so audiences may look forward to more artworks of this level and type.