After Slovakia adopted a series of economic reforms during the first decade of this century, Bratislava has become one of the fastest growing regions in Europe and a construction boom has started all over the city. Developments have brought new life and spirit to many locations and created new living, business, shopping and leisure zones, popular among locals and tourists alike.Two shopping centres close to the city centre - Eurovea and Aupark - are typical of these new developments. They both combine shops, bars and restaurants with entertainment facilities in a pleasant indoor and outdoor environment. 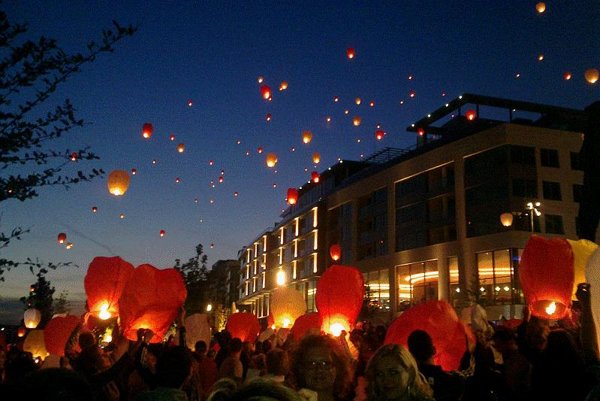 After Slovakia adopted a series of economic reforms during the first decade of this century, Bratislava has become one of the fastest growing regions in Europe and a construction boom has started all over the city. Developments have brought new life and spirit to many locations and created new living, business, shopping and leisure zones, popular among locals and tourists alike.
Two shopping centres close to the city centre - Eurovea and Aupark - are typical of these new developments. They both combine shops, bars and restaurants with entertainment facilities in a pleasant indoor and outdoor environment.

Eurovea, completed in 2010, is a shiny, modern shopping facility, situated on the bank of the Danube between the Old and Apollo bridges. It represents a perfect combination of shopping and relaxation close to the city centre and features a number of modern, medium-height buildings that mark a clear contrast to older houses in the area.

Although Eurovea is a single landmark itself, it comprises a series of smaller landmarks, including a low tower at the entrance to the complex which is reminiscent of London’s “Gherkin”. Eurovea’s central square is an ideal setting for cultural events, raging from concerts, Christmas markets and the mass projection of sporting matches. (The square lies in front of the new building of the Slovak National Theatre (SND) which it is not officially part of Eurovea.)

On the opposite side of the square, close to the embankment, stand two glorious statues. One depicts Milan Rastislav Štefánik, one of the greatest and most famous Slovaks, (see article on page 101), and the other is of a mighty lion holding the coat of arms of the former Czechoslovakia, remembering the common history of Slovakia and the Czech Republic. Both statues face the river Danube and Petržalka district, in order to greet potential incomers by boat.

The embankment also offers a public park with three piers protruding over the lower paths with spectacular views over the Eurovea, the Danube, bridges, and Petržalka opposite.

Over on the Petržalka side of the river, between park Sad Janka Kráľa and the intersection of the bridge Nový Most and highway D1, is Bratislava’s other major shopping complex Aupark.

“I like Aupark more, it’s our old and good friend,” said Cristina Botan, 21, a student from Moldova. “It’s so great, when you can get almost everything in the same building.”

Aupark is similar to Eurovea, but slightly older. However, it is still growing in size. Recently, a new part of the complex was built, the controversial Aupark Tower, which was said by some to interfere with the favourite panorama from Bratislava castle, over Nový Most (New Bridge) and Petržalka. The tower went ahead and is already a prestigious business address, occupied by the headquarters of various companies.

As Bratislava becomes increasingly more modern, its transportation system has grown rapidly more outdated, and a number of future projects have been announced in the attempt to cure one of the city’s major headaches.

“I spend a lot of time at Bratislava’s main station, and it can’t be compared with any other European station,” said Marek Soták, 22, a student who frequently commutes to Bratislava. “It’s too small, filthy and is a repulsive gate to the city. For foreigners, it must be a shocking experience.”

There are similar feelings about the unsightly central bus station at Mlynské Nivy. “I think that this place is really dirty and neglected,” said Tomáš Vallo, 20, who commutes to bus station daily. Local politicians and investors plan to rebuild it into a modern commercial centre with a new bus terminal.

There are also plans to renovate the Old Bridge over the Danube, which nowadays sits somewhat sadly above the river. The mayor of Bratislava, Milan Ftáčnik, told The Slovak Spectator that there are plans to reshape the bridge in its original form, which was blown up by retreating Nazis in 1945.

Ftáčnik also expressed his support for the introduction of a long-awaited integrated transport system in the Bratislava region, which should simplify transportation around and to the city. This is primarily attractive to city locals, but it will definitely ease getting to the sights outside the city for tourists as well.

Peering at Bratislava from on high

Bratislava possesses many places of interest, some of which can make visitors and locals alike stop and stare in awe - even if it is just to consider the feat of engineering or architecture they are looking at. Many of these places even allow visitors inside them, offering the opportunity to admire the monuments themselves from outside, or the city below from within.

For those who enjoy watching the chaos of an anthill, the best choice in Bratislava is the observation deck of Nový Most (New Bridge), the bridge that spans the Danube and provides the vital link between the city centre and Petržalka. The bridge has an observation deck and restaurant on the top of its central pylons, 85 metres above the ground. It combines luxury dining with spectacular views over an area of about 100 km.

Less than a kilometre to the east stands a steel bridge called Starý Most (Old Bridge), which was the first to link both banks of the river. Destroyed during the Second World War and rebuilt by the Soviet Army, nowadays it is closed for road traffic. However pedestrians can enjoy a view of two of Bratislava’s iconic sights: Nový Most and the castle.

Another noteworthy bridge is the newest one, Apollo Bridge, completed in 2005. The amazing construction is perhaps not as unique as some people claim, but it certainly eyecatching, and was nominated for a major civil engineering award in 2006. At night, the illuminated Apollo Bridge becomes an even more photogenic landmark.

On one of the hilltops above the city centre perches the Slavín war memorial, dedicated to the fallen soldiers of Red Army who liberated Bratislava in 1945. The park features a magnificent view over the eastern part of the city, in addition to the military cemetery. In the middle is a 39.5 m high column, topped with a statue of a Soviet soldier erecting the flag above the liberated Bratislava and crushing a swastika under his feet.

The almighty TV Tower, which can be seen from every direction, also houses a restaurant on a rotating deck. It offers a 360° panorama of Bratislava and the surrounding region, including a glimpse into Austria, Hungary and the Czech Republic.

Unfortunately some of the city’s other landmark towers are not open to the public. The distinctive upside down pyramid building is the home of Slovak Radio, and one of the city’s highest modern skyscrapers is owned by the NBS, Slovakia’s central bank. Visitors will have to make do with the other scenic overlooks noted above.

River Park - restaurants, caffe culture in a new complex on the embankment located near PKO and Chatam Sofer Mausoleum

Peering at Bratislava from on high

Slavín
Slavín is a memorial monument and cemetery of almost 7,000 Soviet Army soldiers who fell during World War II while liberating the city of Bratislava in April 1945
Public transport to Slavín Take trolleybus no. 203 or 207
from Hodžovo námestie stop and get off at Búdková stop. Follow Stará vinárska Street for half a kilometre until you get to the Slavín entrance.
On foot to Slavín The shortest way from city centre starts at SAV stop on Štefánikova Street. Walk toward the city centre. At the little intersection of Krížkova-Štefánikova go up Puškinova Street and climb up the stairs. When the road turns go straight and at the intersection of Mišíkova-Havlíčkova turn left to Mišíkova Street. Follow the road uphill. The stairs that lead directly to Slavín begin at the next intersection (at a private parking lot).