PROBLEMS plaguing the new mobile communication system for the armed forces, on which the state has already spent around €200 million, can only be resolved by spending several million more euros, said Prime Minister Iveta Radičová on March 22. She was speaking in her role as acting head of the Defence Ministry about MOKYS, the subject of a much-publicised procurement contract with British defence giant BAE Systems. 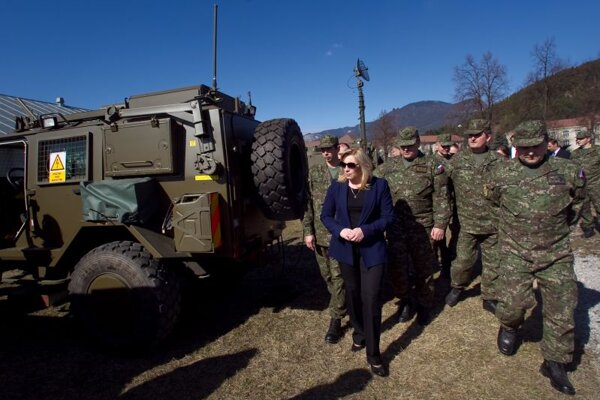 PROBLEMS plaguing the new mobile communication system for the armed forces, on which the state has already spent around €200 million, can only be resolved by spending several million more euros, said Prime Minister Iveta Radičová on March 22. She was speaking in her role as acting head of the Defence Ministry about MOKYS, the subject of a much-publicised procurement contract with British defence giant BAE Systems.

On January 30 Radičová filed a criminal motion with the police related to the contract, one of the most expensive public procurements ever undertaken by the Ministry of Defence. The investigator in that case has already launched a criminal prosecution.

“One thing is the criminal prosecution and another thing is the goal to finish the project, because it is a necessary and good project,” said Radičová on March 22 during a visit to Ružomberok. She described the mobile communication technology as top level, but said radio transmitters and the vehicles that are supposed to carry them during operations are not usable.

The basic problem with MOKYS is the carriers, special vehicles that are supposed to transport the radio technology containers. Twenty MAN trucks that were purchased as MOKYS carriers cannot be used as they are too large to fit in military transport planes, according to the SITA newswire. Alternative Tatra trucks stored at the Ružomberok military barracks would need substantial modifications before they can be used instead.

Radičová said that there might be no other option but to solve the problem of the unusable carriers with yet another tender, adding that the MAN vehicles were purchased without any tender or prior testing. They cost €600,000 each; the army is now said to be looking for alternative uses for them.
The army also purchased transmitters that are not compatible with the other technology developed for MOKYS, SITA wrote.

The prime minister, who will leave office in early April, said on March 20, as reported by the Sme daily, that she could not imagine that anyone would want to halt the investigation into the circumstances of the MOKYS procurement.

According to Radičová, there is legitimate suspicion that the state wasted public money through several disadvantageous deals sealed at the ministry between 2005 and 2010, a time period when the ministry was under the control of two different governments.

However, the MOKYS procurement process was previously investigated by the police’s Office for the Fight Against Corruption, which between 2006 and 2008 inspected whether BAE Systems won the competition in line with the law, according to Sme. Officers checked whether the ministry was entitled to make last-minute changes to the contract conditions and decided that the changes were justified, Sme wrote.

MOKYS is supposed to convert the armed forces from their current analogue communications technology to a digital system.

The original tender for MOKYS, which was worth Sk7.5 billion (about €250 million), was designed to create a battlefield communication system linking all units of the armed forces, from commanders to front-line soldiers.

The system is also supposed to allow transmission of various data, including pictures, from the battlefield to headquarters. One of the conditions of the procurement was that communications sent via the system would be impossible to intercept.