Improving the status of women in business

THE EUROPEAN Union has been working on a plan to pave the way for more women to take managerial positions in top companies Europe-wide, since only 13.7 percent of top managers sitting on the boards of firms in 2011 were women. Compared to 2010 the number rose only slightly, by just 1.9 percent, despite an appeal by Viviane Reding, the European Union's Commissioner for Justice, Fundamental Rights and Citizenship. Last year Reding called on companies to sign a pledge to increase the number of women in top positions, but the initiative has so far been joined only by 24 companies. 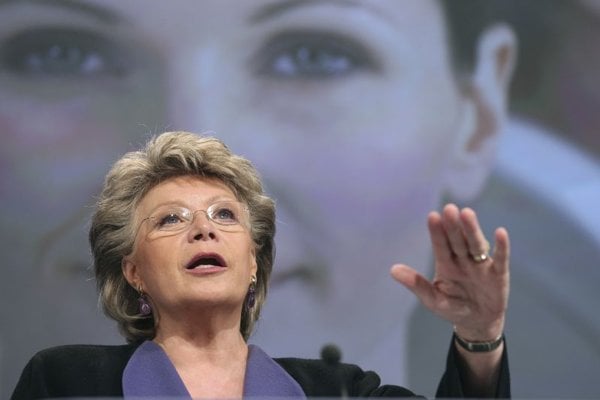 THE EUROPEAN Union has been working on a plan to pave the way for more women to take managerial positions in top companies Europe-wide, since only 13.7 percent of top managers sitting on the boards of firms in 2011 were women. Compared to 2010 the number rose only slightly, by just 1.9 percent, despite an appeal by Viviane Reding, the European Union's Commissioner for Justice, Fundamental Rights and Citizenship. Last year Reding called on companies to sign a pledge to increase the number of women in top positions, but the initiative has so far been joined only by 24 companies.

The situation in Slovakia is very similar. While more than 37 percent of managerial positions in top companies are filled by women, they occupy only 15 percent of board positions, and just 10 percent of company boards are chaired by women, according to a preliminary report on gender equality prepared by the Labour Ministry.

The European Union is now expected to adopt quotas which will lead to higher representation by women on boards of directors and in parliament, Ivana Janíková Stavrovská, the press attaché of the Information Agency of the European Union in Slovakia, told the SITA newswire.

“Personally, I am not a great fan of quotas,” Reding said. “However, I like the results they bring.”
Not all countries are open to using such quotas. Oľga Pietruchová from the Department of Gender Equality and Equal Opportunities of the Labour Ministry says that in some jobs having quotas would be very problematic.

“The official attitude of the Labour Ministry prefers self-regulation and positive motivation for employers to increase [the number] of women in top positions,” she told The Slovak Spectator.

Silvia Porubänová, a sociologist with the Institute for Labour and Family Research, a state-funded research body supervised by the Labour Ministry, added that depending only on self-regulation and so-called ‘natural progress’ will not bring visible results. She believes that affirmative measures such as fixed quotas for women or ‘targeting’ in this area can also help.

Some steps to improve the situation of women in top management have already been taken by the European Parliament. MEPs have called on the European Commission to prepare measures that will help increase the number of women in leading bodies to 30 percent by 2015 and to 40 percent by 2020.
Part of these measures would be fixed quotas, which have already been passed in several European countries. Statistics show that in countries with quotas the number of women in companies has increased.

“The lack of women in top jobs in the business world harms Europe’s competitiveness and hampers economic growth,” said Reding. “This is why several EU member states – notably Belgium, France, Italy, the Netherlands and Spain – have started to address the situation by adopting legislation that introduces gender quotas for company boards. Some countries – Denmark, Finland, Greece, Austria and Slovenia – have adopted rules on gender balance for the boards of state-owned companies.”

Porubänová told The Slovak Spectator that Reding’s initiative is a very promising step for the future since it would help to realise several measures that will help improve the situation of women working in top management roles.

She explained that there could be several reasons for the lack of women in leading positions, including the so-called ‘glass ceiling’, i.e. an invisible yet unbreachable barrier that keeps women from reaching the upper rungs of the corporate ladder, regardless of their qualifications or achievements, or the so-called ‘funnel effect’, i.e. the gradual reduction in the number of women working in senior positions in firms.

“Women represent half of all graduates but their numbers in leading positions in business or politics, or in [the] academic area is significantly lower in some fields, even unequal,” Porubänová told The Slovak Spectator.

She added that child and family care, career breaks for maternity, and other factors are also a handicap, as are the stereotypes and expectations prevalent in society.

Pietruchová from the Labour Ministry adds that women often look for a job where they have more certainties and better structured time, so they can harmonise their work and family life.

“An ideal employer does not differentiate between employees based on their sex but affords promotion based on their quality of work,” Pietruchová told The Slovak Spectator. “On the other hand, he or she creates the conditions for so-called ‘work-balance’ and appreciates employees as the best capital that the company has.”

The low number of women in top positions is not the only thing that differentiates them from their male colleagues. The average monthly salary for women in Slovakia, including all bonuses, is €788 for women, according to a report prepared by the website Platy.sk, operated by recruitment firm Profesia.

By contrast, men earn about €200 more each month, meaning women’s pay is 20 percent lower, on average. When men and women work in directly comparable positions the difference drops to “only” 7 percent, Profesia spokesperson Lucia Burianová told The Slovak Spectator.

“These data do not refer to discrimination against women in the area of pay, but only generally indicate in which areas and in which positions men are paid better than women,” Burianová told The Slovak Spectator.

Though the Antidiscrimination Act stipulates that men and women should have the same salary conditions, the first differences between their earnings appear right after they enter the labour market in their first jobs. These differences reach a peak between the ages of 35 and 44, then gradually start to diminish, according to the Platy.sk survey.

The factors influencing the differences between the salaries of men and women are complex and varied, according to Pietruchová. She adds that the data confirm salary discrimination against women, not only in different positions where employees working in ‘feminised sectors’ generally earn less, but also in essentially equivalent positions.

Burianová said that the differences in salaries are affected not only by gender, but also by educational attainment, experience, company size and also the regions where people work.