OUTGOING Prime Minister Iveta Radičová has wished her successor, Robert Fico, a successful term in office and says she hopes he will have to take only a few tough decisions. But Fico and his future team of ministers will have to deal with two issues that the Radičová cabinet left unresolved at its last session on March 21: whether to provide state aid to a Samsung manufacturing facility in Galanta, and whether to sign a software licence deal with Microsoft. 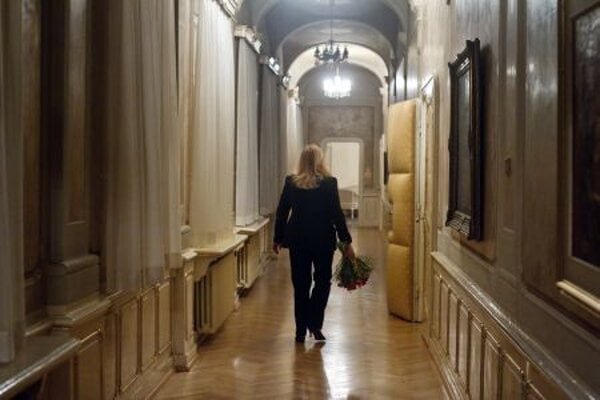 OUTGOING Prime Minister Iveta Radičová has wished her successor, Robert Fico, a successful term in office and says she hopes he will have to take only a few tough decisions. But Fico and his future team of ministers will have to deal with two issues that the Radičová cabinet left unresolved at its last session on March 21: whether to provide state aid to a Samsung manufacturing facility in Galanta, and whether to sign a software licence deal with Microsoft.

“I do not consider it responsible in the couple of days before the appointment of the new government for the outgoing one to decide about any investment transactions,” Radičová stated, as quoted by the SITA newswire.

Radičová will personally hand over the keys of the Government Office to Fico following his Smer party’s landslide victory in the March 10 parliamentary election, which allows it to form the first single-party government that Slovakia has had since 1989. Fico made the same gesture in personally welcoming Radičová to her new office on July 9, 2010.

Radičová noted that Fico has an advantage as he is returning to a familiar place where he resided for four years between 2006 and 2010.

The outgoing prime minister will brief Fico on projects that she thinks the country needs to urgently complete. Though Radičová said the word reform has become a kind of scarecrow to Slovak citizens she believes the country remains in serious need of reform of its social insurance system as well as in health care and education.

The incoming cabinet ministers are expected to first meet after April 4 when parliament is scheduled to hold a vote of confidence in the newly-formed government. One of its first tasks will be to decide about the investment incentive requested by Samsung.

“We will let the future government decide over Samsung so that it does so in line with its own plans whether to provide this investment aid or not,” Radičová stated on March 21.

Samsung Electronics Slovakia has been seeking investment stimuli from the state in the form of tax relief worth €28 million to support its plan to invest €90 million in the modernisation of its plant in Galanta, which it says will save 950 jobs.

Earlier this year the outgoing government broke off further discussion about the investment incentive saying that it needed assurances that the investment would create new jobs and would also lead to more research and development in Slovakia. The government was seeking a memorandum that Samsung would move some research and development activities to Slovakia that would involve cooperation with selected universities and research institutions as a condition for the state investment incentive, SITA wrote.

Samsung Electronics Slovakia employs more than 4,500 people, including about 2,000 in Galanta, with approximately the same number working for its subcontractors, Daniela Piršelová, a spokesperson for the Economy Ministry, told The Slovak Spectator earlier this year. According to Piršelová the company’s investment would modernise production of LCD and LED TV sets and permit manufacturing of new types of 3D, SMART and OLED televisions.

The new Fico government will also decide the fate of a contract with Microsoft for purchase of software for the state administration. The licensing agreement was originally valid until the end of 2011, with an option of a two-month continuation. But Microsoft subsequently agreed to delay a final decision on the contract to March 21 and Radičová said she hopes that the software giant will extend the deadline by an additional two weeks.

The new cabinet will decide whether the government agrees to a deal for 12 months, as the outgoing government suggests, or for 36 months as originally negotiated by the Finance Ministry. If the contract is signed for three years it will cost the state €52.6 million including VAT. A Finance Ministry report on the state’s Microsoft Enterprise Agreement and the ministry’s proposal for its renewal provoked criticism by several non-governmental organisations as well as other ministries, according to SITA.

The Microsoft contract covers upgrades for Windows operating systems, MS Office packages and client licenses for CoreCAL and EntrepriseCAL. The Finance Ministry recommended purchasing 82,388 licences.
Radičová said that the new government should consider whether it is necessary to purchase licences from Microsoft for all state institutions, because some offices might opt for freeware.

“Some institutions are able to switch to an open system very quickly,” Radičová stated, as quoted by SITA.