THE NUMBER of internet users in Slovakia keeps increasing. But not everyone who is eager to access the internet can do so because internet providers do not view it as commercially viable to bring their services to villages in scarcely populated mountainous regions. The Slovak government has taken up the issue and is supporting the development of broadband infrastructure so that no parts of the country remain in a digital abyss, a goal of the European Union as well. 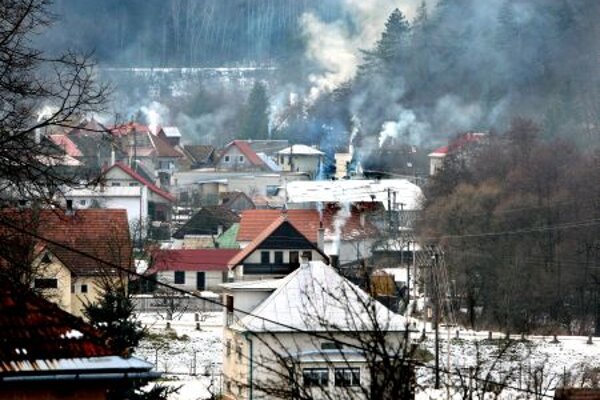 Some locales, like this village in central Slovakia, have difficulty getting web access. (Source: SME)
Font size:A-|A+  Comments disabled

THE NUMBER of internet users in Slovakia keeps increasing. But not everyone who is eager to access the internet can do so because internet providers do not view it as commercially viable to bring their services to villages in scarcely populated mountainous regions. The Slovak government has taken up the issue and is supporting the development of broadband infrastructure so that no parts of the country remain in a digital abyss, a goal of the European Union as well.

“We need more and better broadband access to deliver the digital agenda and to get every European to be digital,” wrote Neelie Kroes, a vice-president of the European Commission for the Digital Agenda, on her blog in November 2011.

The EU’s ambitious plan is to have 100-percent broadband coverage by 2013 in all of its countries and to provide bandwidth of 30 Mbps for all Europeans by 2020 – with 50 percent or more of the EU’s households having access to internet connections faster than 100 Mbps.

It is clear that Slovakia will miss the EU’s goal of 100 percent coverage in 2013 but to improve broadband coverage the Slovak government has launched an €113 million project within the Operational Programme for Informatisation of Society (OPIS) that is co-financed from EU funds. The project is being carried out by the National Agency for Network and Electronic Services (NASES).

NASES has identified what it calls ‘white areas’ – municipalities that have no access to broadband services at all, without considering whether mobile or Wi-Fi access points are available. Marek Sihelský, the deputy to the director general of NASES, told The Slovak Spectator that the agency created this list of white areas from data assembled by the Research Institute of Posts and Telecommunications, from telecom operators and from other experts, while also factoring in the mid-term investment plans of telecom operators.

NASES identified 729 white areas that account for 25.69 percent of the total number of municipalities in Slovakia beyond the Bratislava Region, and said these areas represent a significant gap in citizens’ access to a fast internet connection. NASES reported that 305,933 people live in these municipalities, 6.36 percent of the Slovakia’s population excluding Bratislava Region. Slovakia’s total population is about 5.4 million.

“Nowadays, it is necessary to cover relatively large areas with a small number of potential customers,” Ivan Marták from Orange Slovensko told The Slovak Spectator, adding that the small customer base means lower sales volume and necessitates securing internet coverage as cheaply as possible so that the service does not generate losses.

Under the plan to be funded by OPIS, NASES will build the infrastructure that is currently missing, the so-called “backhaul” connections that link the existing backbone networks with the providers of what is called “last-mile service”.

“The proposed model was prepared in cooperation with the telecommunications sector and from the viewpoint of technology it is proposed as open, non-discriminatory and technologically neutral,” Sihelský told The Slovak Spectator, stating that NASES would be responsible for operation and maintenance of the basic optic-fibre infrastructure that will be built within this project.

Last-mile service provision will then be open to competition and Marták hopes that this will be a battle not only involving various operators but also different access technologies.

“These might be especially wireless technologies at the beginning; but it is difficult to forecast what access technologies will be available here within 40 or even 20 years,” Marták stated.
The current plan calls for white areas to be joined into clusters that will then be connected to the available backbone networks. In cooperation with telecom operators, NASES has begun to prepare wholesale products for operators who will then provide the broadband services within individual clusters.

It is expected that there will be 190 clusters that cover 667 white areas and can provide broadband services to 276,151 citizens. But 62 municipalities with 29,782 citizens are not included in these clusters.

The €113 million currently available within OPIS is enough to cover the building of the planned infrastructure in only 518 municipalities. The specific municipalities and the final infrastructure paths will be agreed upon during the development of the project documentation.

Last November, a website that covers mobile and other technologies, www.zive.sk, wrote that €237 million will be required to cover construction of broadband connections in all the white areas of Slovakia and €91.3 million is required just for the 62 villages that cannot be included in the proposed clusters. Sihelský told The Slovak Spectator that a method to cover these villages remains an open question.

NASES promulgated a €12-million tender last December to select a provider for project and engineering services. Five firms submitted proposals to NASES by the March 5 deadline and these are now being assessed to determine whether each proposal meets the requirements. This is expected to be completed by the end of March and if there are no complications or complaints, NASES will set the terms of an electronic auction that will determine the winner of the tender. The winner will then prepare project documentation and secure the construction of over 4,000 kilometres of optic-fibre networks.

Sihelský said that it is impossible to set an exact date when the name of the winning firm will be known but did offer a tentative timeline for the project.

“Given the action plan and the existing timetable of project works, we expect that construction of the infrastructure will be launched in 2013 and the project will be wrapped up in 2015,” Sihelský stated.