21 Once upon a time in Komárno there was a small town right in the centre of another, pulsing and growing. But although the walls of the Fortress in Komárno still stand, the life vanished through the broken windows years ago, leaving only a mysterious silence. However it does not take much to re-imagine what was once there and even on a simple afternoon walk between the powerful walls, you can feel the history breathing from every side. And if you dare to borrow a torch and go even deeper, you can discover more secrets hiding underground. Once the largest construction of the Austro-Hungarian Empire, Komárno fortress is now abandoned-but it is waiting to be explored. 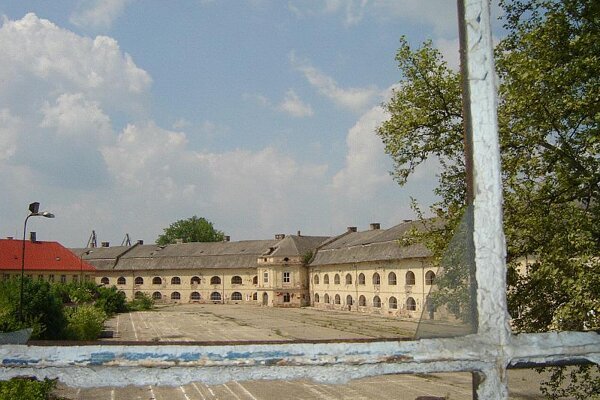 21 Once upon a time in Komárno there was a small town right in the centre of another, pulsing and growing. But although the walls of the Fortress in Komárno still stand, the life vanished through the broken windows years ago, leaving only a mysterious silence. However it does not take much to re-imagine what was once there and even on a simple afternoon walk between the powerful walls, you can feel the history breathing from every side. And if you dare to borrow a torch and go even deeper, you can discover more secrets hiding underground. Once the largest construction of the Austro-Hungarian Empire, Komárno fortress is now abandoned-but it is waiting to be explored.

The vast fortress extends on both shores of the Danube River, linking both the Slovak Komárno and the Hungarian Komárom. It offers a unique opportunity for time-travelling, with a varied past dating from ancient history. Although the first brick was laid in Komárno in about 1265, probably for a fort or small castle, it is likely that the first military camp was built in the year 171, only a few kilometres away.

The fortress grew significantly over the years. The construction of the bastion fortification began on March 23, 1546, but it was not considered finished until 1877. A map from 1876 called "Plan der Befestigungen von Comorn" clearly shows the true scale of a vast fortress complex, but once it was taken over by the Red Army in the 20th century, its very existence was not formally acknowledged.

“In the Soviet period, this place was not even on the maps,” said Estera Ősziová, a local travel guide. “There used to be just some green triangle. Nobody used to talk about it.”

These days, visitors entering the fortress through the main gate will be greeted by the largest building of the complex, a dilapidated construction that feels as though it should have fallen down by now. There is no glass in the window-frames and the plaster has slowly peeled off the walls, revealing the old layers of colours. And then, one of the hallways stretches off into the distance, inviting exploration. Like hundreds of similar long corridors, it seems to have no end at all.

Leading off from the corridor, the brave will finally decide to enter one of the rooms. Perhaps it was once a bedroom, kitchen or storage room - or maybe one of only eight bathrooms, which used to service 8,000 soldiers. Whichever room it is, you can feel the presence of something locked in the past.

On the other side of the hallway is the first yard, where soldiers once paraded in front of a red stage. In the abnormal silence, the wind still carries the sound of the heavy boots hitting the concrete ground and the voice of soldiers chanting as they marched.

A slave to their curiosity, every visitor will end up in front of the second part of the fortress. This is considerably older, dating from the 17th century and originally it was surrounded by a moat 5-metre deep. The entrance gate, known as the Ferdinand Gate, might have been craftily concealed from enemy invaders, but it drew the attention of recent restoration efforts, funded by the European Union. The reconstruction of the gate reveals to visitors now the extent to which the building needs renovation, and it stands like a reconstructed island in the middle of the decaying fortification.

As a home to thousands of Russian troops in the 20th century, the whole building was rearranged into storage units or barracks, painted red of course. In this part of the fortress are the biggest curiosities, such as what appears to be a large swimming pool but that was used as a storage place for potatoes.

“The soldiers went to wash once a month in the Danube, they had to even in winter,” said Ősziová. There is also a room used for fermentation-not alcohol but cucumbers and cabbages.

A short subway leads to the smallest yard. This is the oldest part of the whole fortress system and lies on the easternmost end. One of the walls here dates to around 1470 and previously formed part of the Renaissance palace of Mathias Corvinus, which was destroyed. This yard has possibly the saddest history in the complex. It was used for executions: hanging in the olden days and then shooting in communist times. Nobody knows how many soldiers met their end in this tiny courtyard.

Finally, after having burrowed deep into the complex, comes the most exciting part. It has been known for many years that the fortress has a large tunnel system beneath it, but until a few years ago, no one knew where the tunnels and subways led. Recent excavations have indicated that the tunnels link the remote parts of the fortress to the main building, but it is possible that the whole city of Komárno was built on ground reminiscent of Emmental cheese. Only a small number of tunnels are accessible but still they have possibly the most tourist potential. One can spend hours exploring the whole fortress, but it is also important to respect the few restrictions because some parts may be dangerous.

After a long journey into history, it becomes even more important to focus on the future and, in particular, plans for the fortress. There are many ideas of how to make this place even more interesting, including bold plans to turn the buildings into hotels, restaurants, museums, etc.

The number one priority is to gain inclusion for the fortress on the UNESCO World Heritage List but there is still much to be done before a formal bid can be presented. One of the buildings has been fully restored already and used as a small museum of history of the fort. Recently, some other parts of the building have been renovated and restored by entrepreneurs.

“Komárno is a historical town; there is a great amount of wonderful buildings,” said Danuta Szilárdová, originally from Poland, but who has lived in Komárno for more than 25 years. “Sometimes you don’t even notice them but they are very nice, yet they are much destroyed.”

Komárno has a history dating many hundreds of years. With every step forward you move into a year of the past.