Nitra: Famous even in outer space 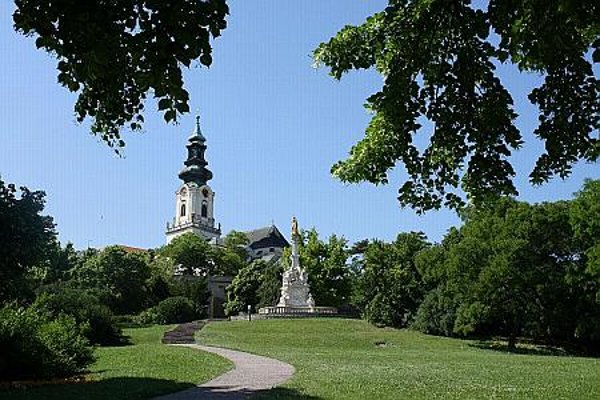 Nitra is the fifth largest city in Slovakia, located in the Nitra region, on the banks of the Nitra River, and about 80 km northeast of Bratislava. The Zobor mountain towers over the north side of the city, and the entire area is ringed both by hilly terrain and numerous fields, particularly towards its southern horizon.

Nitra is the oldest city in Slovakia, with its first confirmed historical reference dating from the beginning of the 9th century. Then it became one of the biggest cities in the Great Moravian Empire and a centre of trade and culture during medieval times. The Slavic prince Pribina occupied Nitra castle during the first third of the 9th century, right about the time that the first known Christian church in central and eastern Europe was being built in Nitra, which dates from 828 AD.

The first known monastery in Slovakia was also in Nitra, and the linguistic pioneers Cyril and Methodius, the creators of Glagolitic writing which preceded Cyrillic lettering, came to the city in 863 AD. All this proud history no doubt contributed to the decision in December 1983 of the astronomer Milan Antal to name the 38th asteroid discovered in the Hungarian observatory Piszkéstető after the town.

“Its strength and beauty lasts through time,” offered Peter Poliak, the chief administrator of Nitra’s observatory, when asked for the reason the asteroid is so named.

The city is historically divided into many districts, the most interesting of which are the Old City and New City areas. Most of the city’s unique historical buildings are centred on the downtown, which remains Nitra’s heart. Central to the old town is castle hill, which is one of seven hills over whose peaks and valleys the city is now spread. (Although Trnava is refered to as the “Slovak Rome”, Nitra’s geography is more analogous. Rome too is built over seven hills.)

The majesty of the medieval ages continues to breathe from the walls of the 11th century Nitra castle, which remains largely intact. History seeps from old pages of books and scrolls (around 66,000 pieces in total) conserved in the collection of the Diocesan Library from the 12th century, most of which are still accessible to the public.

Also in the castle complex, the cathedral of Saint Emmeram, with its astonishing interior, has stood in Nitra since the 13th century. There are also three notable statues in the castle square and gardens. The first depicts Prince Pribina, one of the town’s first noble inhabitants; another shows Corgoň, aka “The Mighty”, a character from local legend who reputedly single-handedly repelled the Ottoman invasion (and is now cast as Nitra’s Atlas); the third is of the Solun brothers, Cyril and Methodius.

Beneath the castle there is a huge city park with a swimming pool and ponds on the north side and a historical pedestrian zone on the south. The main street of the pedestrian zone is lined with historical buildings from the 14th-19th centuries and leads to the central Svätopluk Square, with one of the most modern theatres in Slovakia, Theatre of Andrej Bagar.

The hill named Zobor is, at 587 m, the highest in the city district. Its silent forests can easily be reached by bus from the town centre, and on the way to the top of the hill you recuperate at the mineral spring and peer into Gorazd’s Cave, where a hermit monk once stayed. The nature reserve of Ponitrie provides the perfect location for tours, with its numerous ruins in a 50 km radius around the hill top and many signposted paths of varying length and difficulty. It is possible to camp in many of the ruins of the Nitra Region, eg. Hrušov, Gýmeš, Oponice, Studený Hrad, Čierny Hrad, etc.

Nitra also has a Calvary, on the third highest hill of the city, at the bottom of which is the Church of the Assumption from the late 12th century, as well as the Lourdes cave.

The remaining four hills are difficult to see from ground level, but taking to the air can offer views of Čermáň, Borina, Vŕšok and Martinský vrch. There is a sport airport about 11 minutes away from the town centre, in the village of Janíkovce, which has hosted an international gliders and light aircrafts competition for the past few summers.

Visitors also frequently flock to Nitra’s Agrokomplex, in Exhibition Square, in the new part of the town, which hosts, among other events, the Autosalon Nitra car show, now in its 18th year, and a major international cultural and food fair, which has been going for close to 40 years.

“It is the 20th anniversary this year,” said Marta Plichtová, PR manager, promising a major European theatrical production, the return of the biggest stars who have previously appeared at the festival, and a Best of Slovak Theatre production. “We will satisfy all unrealised dreams,” she said.

Car
Nitra is connected by a freeway to Bratislava 89 km away. The Bratislava to Nitra leg takes about 45 minutes.

Bus
Coaches from Bratislava leave regularly from the main station at Mlynské Nivy. The trip takes 75 to 90 minutes. Yellow Express buses leave hourly from Mlynské Nivy and run straight to Nitra. The buses offer free Wi-Fi and take about an hour to get to Nitra. The bus station in Nitra is about a 15-minute walk south of the city centre.

Train
There is only one direct train between Bratislava and Nitra. For train information see www.cp.sk . You are better off taking the bus.

Disco and pubs in Nitra

Galleries, museums and theatres in Nitra

Nitriansky Express
(Nitra Express Train)
www.nitrianskyexpres.sk
Nitra Sightseeing Express - runs at hourly intervals from Svätoplukovo Square from 9:00 (10:00 on weekends) to 17:00. During the summer months trains run until 19:00. For groups of 10 or more it is possible
to make special arrangements for trips at other times. The ride takes about 45 minutes, including a 15-minute break at the castle; Price: € 1

August: Klokočinský jarmok Fair ; An event in the Klokočina housing estate which revives the old folk customs, creates the space for the presentation of the folklore ensembles, music and dance groups from the town and its vicinity; Mikovíniho Square, Nitra; www.nitra.sk (Slovak only)