Bojnice: Where the spirits return to life

Every year in May the dark history of Bojnice Castle comes back to life. During the rest of the year, Bojnice is a charming fairytale castle, and is Slovakia’s most visited tourist attraction, but annually it becomes the venue for an International Festival of Ghosts and Spirits, with a specific theme. In previous years, the castle has experienced vampires, witches and the like. In 2011, a former occupant Anna Rosina Listiusová, also known as “The witch from Šintava”, returned inviting back all of the ghosts who had ever been to Bojnice before. 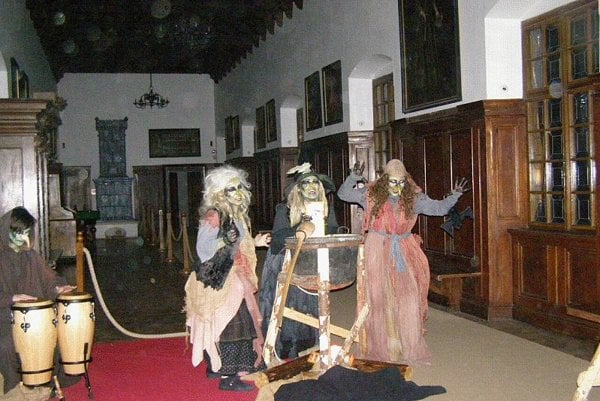 Every year in May the dark history of Bojnice Castle comes back to life. During the rest of the year, Bojnice is a charming fairytale castle, and is Slovakia’s most visited tourist attraction, but annually it becomes the venue for an International Festival of Ghosts and Spirits, with a specific theme. In previous years, the castle has experienced vampires, witches and the like. In 2011, a former occupant Anna Rosina Listiusová, also known as “The witch from Šintava”, returned inviting back all of the ghosts who had ever been to Bojnice before.

The festival is only one way in which Bojnice stands out from the host of other castles in Slovakia. Though you do not meet spooky creatures in the corridors during every tour, the whole atmosphere of the place makes you believe that there actually are spirits (either good or bad) remaining here, transporting a visitor’s imagination back to ancient times when the castle was owned by Hungarian aristocrats.

The very first written record about a castle in Bojnice appeared in 1113 in the documents of the abbey in Zobor. Over the next few centuries it was owned or occupied by several patricians, including Hungarian kings and wealthy aristocratic families. Each owner gave the castle a new look and gradually changed it from an ordinary stone building into a site built in Gothic, Renaissance and Baroque styles.

The most significant reconstruction of the castle was prepared by its last aristocratic owner, count Ján František Pálffy, who even participated in drawing the architectural plans based on structures he had seen in France, Italy and Austria. After a 22-year overhaul, the result of Pálffy’s vision is something that today looks like Disney’s Magic Castle. Yet Pálffy himself never saw the final product: he died two years before the reconstruction was finished and was buried in a tomb situated in the castle.

Because Pálffy died childless, the castle was inherited by his relatives. In 1923 they made an agreement with the government, which became the official owner of the building and transformed it into a museum. Visitors today can see a host of diverse exhibits, some of which are the original property of Pálffy. One of the most precious artefacts is the so-called Bojnice’s Altar, with paintings of 12 saints, together with Madonna and her baby, painted by the Italian Nardo di Cione in the 14th century.

A tour of the castle begins in the Flat of the Count, a grand and magnificent apartment which contains rooms that once served for entertaining, dining, working or relaxing. Most of the rooms have their own fireplace (or at least a fire), precious furniture, richly decorated ceilings and walls overstuffed with various paintings.

The Oriental Room is packed with furnishings brought to the castle from various Asian countries, and a wall decoration carved from cedar wood. According to legend, the mirror in this room is able to increase its user’s beauty in one year. Another room, the Golden Hall, hides its most spectacular treasure on the ceiling: it is decorated with 183 gilded angels’ faces (on which no single expression is repeated) surrounding Pálffy’s coat of arms.

The second main section of the castle - the Middle Castle - is more restrained. Though the decorations on the walls and ceilings are rich, most of the furniture is not so striking. The rooms are connected by a marble staircase which is lined with sculptures of saints.

The third part of the castle, the representative rooms, are not included on the ordinary tour. These rooms can be used for special events, such as weddings or conferences.

Visitors usually end the tour in the crypt, where the sarcophagus of Ján Pálffy is located, before moving outside to the evergreen French park. It is also possible to visit the castle’s cave, buried amid the foundations.

Bojnice is an atmospheric place at all times, made even more so by the continual reminder of the spirits that supposedly haunt its walls.

“Many sensible people say that ghosts stay on Earth if they did something bad during their life,” said Vojtech Bartko, the director of the last festival of ghosts and spirits.

Maybe this is the reason why the locals have always connected the castle with the gloomy history of its owners and believe in spirits occupying the rooms.

“I am afraid of the Middle Castle,” said a tour guide named Nina Šluchová. “There are the rumours that the ghosts haunt here the most.”

February: Valentínsky víkend na zámku (Valentine’s Weekend at the Castle); A day full of activities and competitions prepared for couples;

April: Veľkonočné prechádzky zámkom (Easter Marches through the Castle); An exhibition of spring decorations and crafts such as decorating eggs;

May: Medzinárodný festival duchov a strašidiel (International Festival of Ghosts and Spirits);
Two May weekends during which the castle is occupied by the ghosts of characters associated with its past;
Jarmok spojený s prezentáciou remesiel (Fair and accompanying exhibition of crafts);
Noc múzeí a galérií (Night of Museums and Galleries); A tour through the castle accompanied by various activities and special exhibitions;

September: Rytierske dni (Knights’ Days); Various performances, mostly for children, where the actors play out scenes from the age of chivalry.

December-January: Šľachtické Vianoce a Traja králi na zámku (Noble Christmas and the Three Kings at the Castle); Tourists can see the castle decorated with the symbols of Christmas and demonstrations of castle traditions;

Other attractions in Bojnice

Kúpele Bojnice (Spa Bojnice)
The thermal water here is used for the treatment of locomotive disorders and diseases of the nervous system.
www.kupele-bojnice.sk
Tel: +421 (0)46 511-6357
The spa is located 3 km from Bojnice.