THE RULING Smer party has not turned to euphemisms to describe how it will tackle public finances. The language is instead straightforward: the new government wants to scrap the flat tax by introducing heavier tax rates for the rich and for highly profitable businesses, to tax luxury products and services, and may also apply a higher levy on banks. 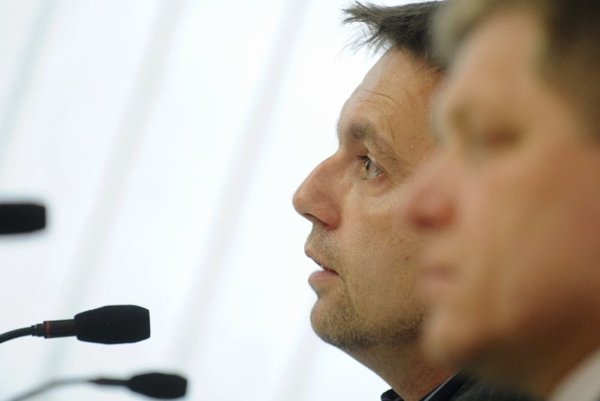 THE RULING Smer party has not turned to euphemisms to describe how it will tackle public finances. The language is instead straightforward: the new government wants to scrap the flat tax by introducing heavier tax rates for the rich and for highly profitable businesses, to tax luxury products and services, and may also apply a higher levy on banks.

While the new government says the tools will be subject to a wider debate involving experts, social partners and business bodies, it is already clear that in order for the country to push the budget deficit under 3 percent of GDP by 2013, as required by EU fiscal rules, the government of Robert Fico will have to come up with a workable austerity package.

The deficit for 2012, planned at 4.6 percent of GDP, is seriously endangered, according to Prime Minister Robert Fico, who on April 3 said that the recent deficit growth is “literally brutal”. Fico was commenting on data suggesting that that the state budget in the first quarter of 2012 posted a deficit of €1.155 billion, a €500 million year-on-year deterioration, the SITA newswire reported.

Parliament last year approved a budget for 2012 which foresaw a deficit of 4.6 percent, as opposed to the previously planned 3.8-percent shortfall. The target was eased due to gloom over the financial crisis in the eurozone as well as the collapse of the centre-right government of Iveta Radičová.

Even before Fico’s comments, Finance Minister Peter Kažimír had indicated that the state may seek to generate more funds through higher taxes, and signalled the end of the flat tax.

“It is possible to say that the flat tax died during the night of March 10 to March 11 [the date of the election],” Kažimír told public broadcaster Slovak Radio on March 23, adding that Smer will propose cancellation of the flat tax to its social partners.

Outgoing Finance Minister Ivan Mikloš said scrapping the flat tax was the worst possible choice and expressed scepticism about whether the move would have any positive effects.

The end of the flat tax?

While Slovakia’s 19-percent flat tax was a useful selling point in the country’s drive to lure foreign investors, experts suggest that having an identical VAT rate, personal income tax rate and corporate income tax rate is not the most crucial factor for investors. In fact, the outgoing government had already introduced some unevenness by increasing VAT to 20 percent in January 2011.

“Investors are instead interested in the amount of the rate in comparison with other countries, the stability of the rate, and the administrative burden of tax bureaucracy,” Radovan Ďurana of the economic think tank INESS told The Slovak Spectator.

According to Ďurana, the plans to hike taxes on large firms are an example of a selective approach which prompts further questions about what changes will come in the near future, since such taxes cannot eliminate the high deficit.

“Installing a second rate at the same time will motivate firms to optimise their volume of activities or profits in such a way as to avoid the higher rate,” Ďurana said. “This is also valid for private person, who then might prefer a country [which is] more advantageous in terms of taxes, or simply prefer more free time over work.”

Nevertheless, Ďurana admits that it is difficult to estimate the impact in advance.

Taxes on the rich and the banks

The new government is toying with the idea of a 25-percent rate on high-earning individuals, while the most profitable firms might be taxed at 22 to 23 percent. People who purchase luxury cars might have to pay a special one-off tax, the rate of which might depend on engine size or emissions, Kažimír said in an interview with Hospodárske Noviny daily.

But the idea of higher taxes on higher incomes, according to Ďurana, is a way of “diverting attention from the real problem, which is the huge deficit of €3.3 billion, representing 17 percent of the tax-levy revenue of the state”.

“Luxury taxes are a tool for avoiding having to reduce waste in the public finances,” Ďurana said.
Fico also confirmed that a rise in the special bank levy is being considered by his new government.

“We have to hike the bank levy,” Fico told a talk show on public-service broadcaster Slovak Television (STV) on March 25. “If we do not hike taxes for them, then there is only the other alternative: hiking the 20-percent VAT rate to 24 or 25 percent.”

Nevertheless, Fico said that before taking the move he would hear the arguments of the bankers and would discuss specific austerity measures with a number of institutions and associations which he called the Solidarity Council. This should open its doors to representatives of employers and unions but also, for example, churches.

But some observers suggest that a raised levy on banks might well miss its target.

“This tax tool, which was installed in an effort to improve the budget balance, is among the highest of all the countries that have instituted it,” said Ďurana. “A further rise could impact the prices of products for consumers and firms, which is not a good tool in the fight with stagnating economic activity in Slovakia.”

As for steps that the new government could take in its effort to improve public finances, Ďurana said that reserves in the form of reduced public spending have not so far been exhausted and thus tax hikes are not necessary.

Changes for the self-employed?

It also seems that the austerity drive to hit Maastricht targets will also affect the self-employed.

Kažimír suggested that the rules governing the self-employed might change as well, especially the 40-percent lump-sum allowance that self-employed taxpayers can deduct from their gross income before calculating tax. Plans by the previous government to abolish this sum and replace it with a maximum monthly allowance of €200, a figure linked to Slovakia’s official subsistence level, hit a raw nerve with the self-employed last year.

The changes were proposed by the government of Iveta Radičová as part of a reform that the government said was designed to develop a unified system for collection of income taxes, customs duties and mandatory payroll levies that would ease the administrative burden on employers as well as employees. The reform died when the government collapsed.

Kažimír nevertheless said that he plans to discuss any changes with representatives of the self-employed.

“The changes could have the form of licences or forms for pre-paid taxes and payroll taxes for the self-employed in a defined range of incomes,” said Ďurana, adding that using this approach could, by saving administrative costs, be more beneficial to both sides.

According to Ďurana, another simplification could be voluntary cancellation of the duty to pay above-minimum payroll taxes to the social insurer.

Peter Goliaš, director of the INEKO think tank, said that the main problem is that employees are switching to artificial trades, making agreements or setting up companies with the aim of decreasing their tax burden.

“This worsens the state of the public finances since after optimisation people pay less to the social insurer or the health insurance companies,” Goliaš told The Slovak Spectator. “The solution is to restrict exemptions in such a way that the tax-levy burden is comparable regardless of whether it is income from employment, self-employment, contracts or businesses.”