THOUGH it seemed that a dispute between Freedom and Solidarity (SaS) and the Christian Democratic Movement (KDH) over which party would choose the chair of parliament’s economy and budget committee would need to be decided by the first vote in the new parliament, SaS made a concession and gave up its claim to the post on March 30. The decision by former economy minister Juraj Miškov to no longer seek the chair ended a post-election tussle and the KDH will now nominate its candidate. 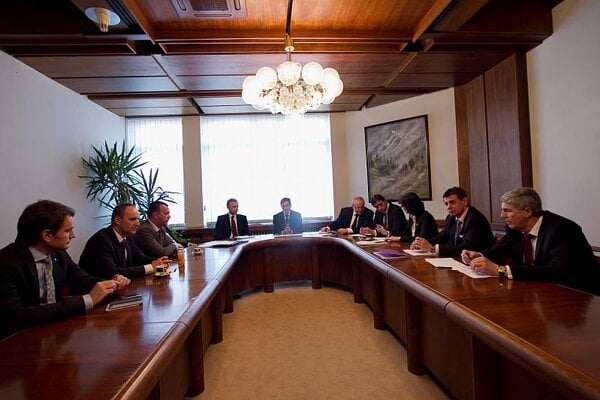 THOUGH it seemed that a dispute between Freedom and Solidarity (SaS) and the Christian Democratic Movement (KDH) over which party would choose the chair of parliament’s economy and budget committee would need to be decided by the first vote in the new parliament, SaS made a concession and gave up its claim to the post on March 30. The decision by former economy minister Juraj Miškov to no longer seek the chair ended a post-election tussle and the KDH will now nominate its candidate.

“They [the opposition parties] probably have not become accustomed [to the fact that] they are now in opposition,” political scientist Juraj Marušiak told The Slovak Spectator when asked how he assessed the battle among the centre-right parties for parliamentary posts.

“Surely the conflicts that have their roots in the time when they were in government [together] are coming into play,” he stated, explaining that it is also likely that the parties will begin to have some internal discussions and potential conflicts as they seek to determine who was responsible for their losses in the March 10 elections.

Miroslav Kusý, another political scientist, said that unlike totalitarian societies, it is normal behaviour for political players in a democratically-governed society to have regular quarrels because it is “an open community in which everybody is defending their interests”.

SaS and the KDH battled over the parliamentary posts for several weeks and failed to find a compromise despite three joint meetings. The other three opposition parties warned that if the two did not reach an agreement, a final decision would be made by Smer since it has a majority of 16 seats and could dictate the parliamentary vote.

Miškov announced on March 30 that he would no longer seek the chair of the economic committee, stating that he did not want to help incoming Prime Minister Robert Fico portray the opposition as a quarrelsome group, adding that he viewed Fico’s offer to the opposition parties to divvy up nine committee posts as “another media game [by Smer]”, the TASR newswire wrote.

“Fico scattered leftovers and waited for the opposition to start fighting over them and SaS does not want to aid and abet this,” Miškov stated, as quoted by TASR, saying that he will serve as an ordinary member of the committee.

The former culture minister, Daniel Krajcer, also from SaS, told the media that the discussions among the opposition parties about nominating chairs for the parliamentary committees were constructive and that only the KDH created a fuss.

“We have got the feeling that KDH thinks it did not get enough, even though it was given the most important positions from among those offered to the opposition,” Krajcer stated, as quoted by TASR.
To send a message about how SaS felt about the demands of the KDH, the party delivered a roast pig to KDH headquarters “to feed their greed”, TASR wrote.

KDH responded that “neither the constitution nor the law states that the post of the chair of parliament’s economic committee belongs exclusively to SaS”, as quoted by TASR.

“This is a matter of political agreement,” said KDH spokesperson Matej Kováč, as quoted by TASR, adding that if SaS had not caused the fall of the Radičová government it could have continued to head the Economy Ministry.

“We are sorry that SaS has not learned its lesson and continues in petty quarrels,” Kováč stated, as quoted by TASR.

Dividing up the posts

Before the first official session of the new parliament on April 4 the opposition had managed to agree on a nearly complete list of candidates for the parliamentary posts.

The KDH will nominate Ján Figeľ, its chairman, as one of the deputy speakers of parliament and offer former interior minister Daniel Lipšic to lead the parliamentary committee that oversees the Slovak Information Service (SIS) intelligence agency, while Ján Hudacký, the former state secretary (i.e. deputy minister) at the Transport Ministry is slated to become chair of the economy and budget committee.

Most-Híd will nominate Gábor Gál as chair of the parliamentary committee that oversees the decisions of the NBÚ and former deputy prime minister Rudolf Chmel will be proposed as the chair of parliament’s human rights committee.

The Slovak Democratic and Christian Union (SDKÚ) will nominate Martin Fedor to chair the parliamentary committee that oversees the military intelligence and counter-intelligence services as well as the chair of the committee that evaluates conflicts of interest by MPs.

It was not yet clear on April 4, as the Slovak Spectator went to press, who the opposition parties would pick to become the chair of the foreign affairs committee. There was originally agreement that the post would go to one of the parties that did not choose the chair of the economy committee. But after SaS decided to no longer seek that chair, the parties started to discuss other possibilities, with František Šebej, who occupied that chair during Radičová’s government, being mentioned. Though nominating Šebej would mean that Most-Híd would have more parliamentary positions than it would be proportionally entitled to, several MPs told the media they had no objection to such a move.

Marušiak told The Slovak Spectator that filling parliamentary posts that are available to the opposition can be a matter of prestige and influence to the parties as well as to individual MPs, who become more visible in the media. He added that there are several reasons why MPs fight for these positions, such as personal ambition and the desire to have more influence over ministries and government agencies, as well as some seemingly irrational motives.

According to Marušiak the opposition parties will try to achieve several things in the new parliament: they will attempt to be seen as an alternative to the sitting government in order to improve their chances in the next election; and they will try to form a “solid opposition” by effectively criticising the government and presenting alternatives to government-proposed policies. But he added that so far the Smer party has not given the centre-right parties a clear reason to cooperate with each other and present an alternative to government policies.

Kusý told The Slovak Spectator that the opposition parties should seek a consensus on common goals because “it proved to be suicidal [in the previous government] when the parties wanted to act on their own”, adding that the opposition’s joint goals must then be presented by strong political leaders.