Chaos over higher salaries for nurses

THOUGH Slovak nurses were guaranteed a higher minimum salary by parliamentary legislation passed last year some hospitals are saying they do not have the money to improve nurses’ salaries and have been seeking ways to avoid the law by modifying nurses’ employment contracts and changing their job titles to administrative workers or social workers. 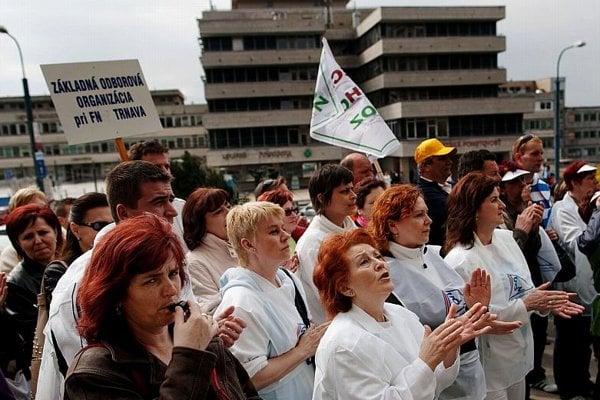 THOUGH Slovak nurses were guaranteed a higher minimum salary by parliamentary legislation passed last year some hospitals are saying they do not have the money to improve nurses’ salaries and have been seeking ways to avoid the law by modifying nurses’ employment contracts and changing their job titles to administrative workers or social workers.

While the outgoing health minister says money is available for the increases specified by the law on minimum wages for nurses and midwives that became effective on April 1, the incoming health minister, Zuzana Zvolenská, stated that the situation at some hospitals is critical and she is ready to negotiate with all involved parties to find a solution as well as to ask for more funding from the state.

The legislation mandates that the minimum starting salary for a nurse or midwife, without practical experience, should be at least €640 a month and then increase over the next three years to reach €666 per month. A nurse’s minimum salary is then supposed to increase every three months until it reaches €928 after 33 years of work experience, the SITA newswire wrote.

Mária Lévyová, the president of the Slovak Chamber of Nurses and Midwives, insists that higher salaries for nurses are legitimate because it is a highly-qualified profession that involves a lot of psychological pressure and responsibility. She said that several hospitals demanded that their nurses sign addendums to their employment contracts before April 1.

“This is not the way to force nurses to perform work, by changing the scope of our work activities, because a nurse is not an administrative worker,” Lévyová told The Slovak Spectator.

Nurses as well as physicians might put some joint pressure on the government if the situation does not change, Lévyová said.

While some hospital administrators agree that the wages of nurses are too low, some stated that they cannot financially cover increasing nurses’ wages in accordance with the legislation and that the legislated approach is non-systematic.

Marián Petko, the president of the Alliance of Slovak Hospitals, which represents many regional hospitals, told The Slovak Spectator that nurses’ salaries at some hospitals are not high enough but added that “the pay of other health-care workers is not sufficient either”, specifying professions such as laboratory personnel, x-ray specialists and physiotherapists, and added that Slovakia’s entire health-care system has long been underfunded.

Petko stated that the law requires hospitals to institute higher minimum salaries but does not cover the issue of higher reimbursements from health insurance companies or the government to compensate for the costs.

“In our view the law is at the edge of constitutionality and we think it is non-systematic, which has brought unbelievable chaos and hostility.”

Petko added that if the government fails to take action to resolve this situation some hospitals will have serious problems in providing health care in May and that the whole sector could collapse financially.

“The situation in the health-care sector is the worst it has been over the past 15 years,” Petko charged.

Some nurses have complained that they were bullied by their employer to make changes in their employment contracts. Lévyová said the first problems occurred in hospitals in Banská Bystrica Region, where nurses were forced to sign new contracts with a term of only three months.

The Pravda daily reported that the hospital in Žiar nad Hronom forced nurses to sign amendments to their original contracts on pain of dismissal, adding that similar situations were reported at other hospitals as well.

The Slovak Chamber of Nurses and Midwives has appealed to its members not to agree to changes in their employment contracts in response to threats by hospitals to shorten their working hours or reclassify their working activities, according to an official statement released by the chamber.
“Increased costs to cover higher wages of nurses will not be possible without the hospitals running higher debts,” Ružena Maťašeje, the spokeswoman of the F. D. Roosevelt University Hospital in Banská Bystrica, told The Slovak Spectator, while nevertheless adding that the hospitals must obey the law.

The outgoing health minister, Ivan Uhliarik of the Christian Democratic Movement (KDH), said money should not be poured into the health-care sector in what he called a non-systematic way before the efficiency of hospitals is improved, SITA reported. He stated that the hospitals will gradually receive the funds to cover the salary increases for nurses, noting that there should be savings of about €50 million within the ministry because of its new drug policies. He added that a further €30 million in resources should be gained through better collection of premiums by Slovakia’s health insurers.

But incoming minister Zvolenská, of Smer, stated on April 1 that despite Uhliarik’s statements that resources are available for nurses’ salaries, the opposite is true.

“It’s very sad that even though Uhliarik has known about the problems for several weeks, he did not resolve them,” Zvolenská stated, as quoted by the TASR newswire, adding that Uhliarik was misleading people when he said resources were available to increase the minimum salaries of nurses.
Zvolenská said she will seek to negotiate a change in the state budget with incoming Finance Minister Peter Kažimír and also propose an increase in the health insurance premiums paid by the state for those individuals who do not pay their own premiums.

Uhliarik responded that Zvolenská has indirectly indicated that she will pour more money into the health care system by saying that the state budget must be modified and that state-paid premiums must be increased, TASR reported, adding that Zvolenská should not spend the reserve of €50 million because the state-owned health insurer, Všeobecná Zdravotná Poisťovňa, has raised its payments to hospitals to cover salary increases for doctors and nurses.