GLOBALISATION, a process which requires ever-better transport services, has led to the development of sophisticated forms of intermodal transport combining – among others – road, rail, and maritime carriage of goods. 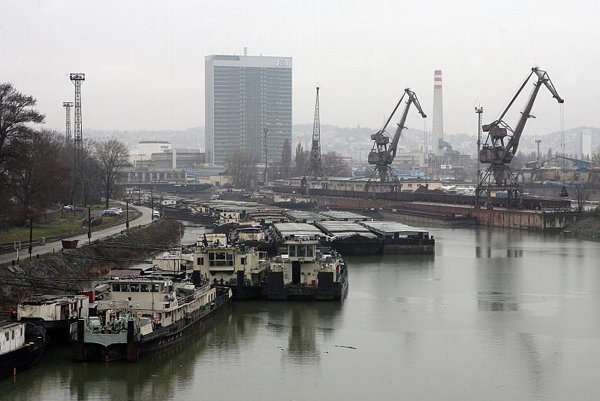 GLOBALISATION, a process which requires ever-better transport services, has led to the development of sophisticated forms of intermodal transport combining – among others – road, rail, and maritime carriage of goods.

But intermodal transport requires dedicated infrastructure, specifically terminals that allow goods to be moved between different modes of transport. Slovakia now plans to build, with the help of EU funds, public terminals that will link into the existing European network. However, these plans have not been welcomed by at least one existing provider of intermodal services which has already invested heavily in such facilities in Slovakia.

Intermodal transport has been growing across Europe. The economic crisis affected it like many other sectors, but growth is expected to quickly resume its pre-crisis trend, Ľubomír Palčák, head of the private Transport Research Institute (VÚD), told The Slovak Spectator.

Pavol Marušinec, the chief state counsel for intermodality and logistics at the Transport Ministry, wrote in a paper about development of combined transport in Europe and Slovakia that it had undergone turbulent development here over the last 18 years. Now, however, it is the most
dynamically developing transport sector, with an average annual increase of 16 percent.

A study elaborated by a Belgian research institute, Intraco Consulting, indicates that, assuming favourable development in Slovakia’s economy and the continuing migration of industry to Slovakia, the total potential for intermodal transport, i.e. maritime and continental combined transport, should increase to 6 million gross tons in 2015 and to 12 million gross tons in 2020.

Palčák said he also believes that there is space for development of intermodal transport in Slovakia, adding that this development will be limited by the capacities of terminals and rolling stock. While construction of modern intermodal transport infrastructure requires huge investment, Palčák said that Slovakia has the advantage that, as an EU member state, it can tap EU funds to build terminals and reconstruct its railways.

The EU-funded Operational Programme Transport for 2007-2013 includes, as its number-three priority, intermodal transport infrastructure. This priority should contribute to a network of public intermodal terminals which, according to the programme, are based on principles of sustainable mobility creating basic conditions for the development of environmentally friendly transport systems.

Under this priority plans to build modern intermodal terminals projects in Slovakia are currently being prepared.

“New terminals will replace unsuitable container terminals, which are located in built-up areas of cities and cannot be effectively reconstructed or extended,” Palčák said.

Originally, according to Marušinec, there was a plan to build four intermodal terminals in Bratislava, Žilina, Košice and Zvolen. But preparatory work showed that western Slovakia had the potential for two terminals while the smallest potential was in central Slovakia. This led to a change in the plan, with one terminal being added in Leopoldov, near Trnava, and construction of the Zvolen terminal being postponed. For the time being, projects to build four terminals are in the pipeline, with an aggregate cost of €120 million. Of this amount, 85 percent should be paid for out of EU funds and the rest by Slovakia.

Marušinec’s documents state that modern intermodal terminals are now being built as universal transhipment facilities, which serve maritime as well as continental combined transport and are able to process any intermodal cargo unit.

Since these terminals are being built as public facilities using EU contributions, they must meet some regulatory conditions formulated in the directive about development of railways, part of the so-called First Railway Package. Based on this the state must guarantee that access to services at these intermodal terminals will be non-discriminatory.

“Slovakia benefits from being home to carmakers, electro-technical producers and logistics warehouses, into which a huge mass of goods is flowing,” Peter Kiss, CEO of Metrans (Danubia), told The Slovak Spectator, adding that these producers are importing thousands of containers, especially from the Far East. After their products are assembled, re-distributed, unpacked and packed again in Slovakia they are then dispatched for transport elsewhere in Europe or eastwards.

Metrans (Danubia) selected Dunajská Streda as the site for its terminal because of its location in the middle of the Bratislava-Budapest-Vienna triangle.

“Our feeling was that western Slovakia will be an entry gate for investments, something that has happened,” Kiss said, adding that his company’s terminal is currently the most modern in the area, with the highest annual capacity of up to about 600,000 TEU (or twenty-foot equivalent unit, a measure of cargo capacity).

However, the company is far from pleased with the state’s plans to build public terminals, and Kiss criticised the idea.

“This is not a good idea,” Kiss told The Slovak Spectator. “It is a classical one-sided decision… For 17 years during which I have been working in combined transport, no minister except one has arrived and asked for the opinion of the other party. The plan of construction of public terminals [represents] depreciation of all the investments which companies in combined transport have made up to today...I really do not know how this will affect the amounts that we are transporting now.”

Kiss perceives the planned public terminals as representing competition for existing facilities, but built with state and EU money.

The goal of Priority 3 of the Operational Programme Transport is to create technical conditions in order for companies carrying out continental combined transport successfully in western Europe, which currently are looking for ways to extend this kind of transport to newer EU members in central and eastern Europe, to enter the Slovak market.

“The state certainly does not have any plans to [transport anything] or interfere in the commercial environment of transport, which is highly liberalised,” said Marušinec. “But it is necessary to realise that intermodal terminals are, based on the valid European legislation, transport infrastructure like roads, highways, railways, ports or airports, and that the state has to care for their development and provide services on a non-discriminatory basis. To do this it has been creating the required technical conditions.”

Public intermodal terminals are not the only terminals in the pipeline. There is also an ambitious project to build a five-mode Transcontinental Transit Terminal (TTT) built on the borders of Slovakia, the Czech Republic and Austria that will interconnect the transportation network of the western part of the EU with extra-European routes, mainly to Asia.

The potential resurrection of the project to build a broad-gauge railway track across Slovakia may be of vital importance for the TTT project, as its focus is on railway transport, especially the broad gauge tracks used by Russia and other former Soviet republics, Michal Moravčík from Consulting Services told The Slovak Spectator.