AN OPERA by famed Czech composer Leoš Janáček was staged in 1920, the inaugural year of the Slovak National Theatre (SND) in Bratislava, and it has returned to that stage for the first time since 1986. Janáček’s opera has been staged under two different titles, Jej pastorkyně (Her Stepdaughter) and Jenúfa, both referring to the principal character. 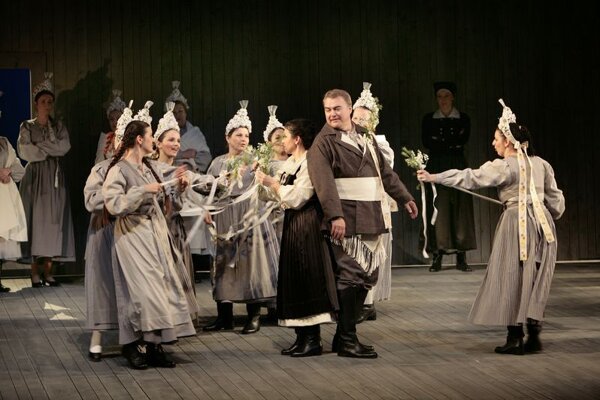 AN OPERA by famed Czech composer Leoš Janáček was staged in 1920, the inaugural year of the Slovak National Theatre (SND) in Bratislava, and it has returned to that stage for the first time since 1986. Janáček’s opera has been staged under two different titles, Jej pastorkyně (Her Stepdaughter) and Jenúfa, both referring to the principal character.

“Jenúfa is considered the pinnacle of Janáček’s work and is widely staged all over the world. It also proves the old saying that it is most difficult to win over audiences at home. Rumour has it that Janáček is better accepted abroad than at home,” said Martin Otava, the Czech director of this most recent version, pointing specifically at Brno where the opera premiered and nearby the small village where the opera is set.

“It is difficult to stage, maybe more difficult than other operas – not only by Janáček – as it does not leave space to hide behind anything; to play and meddle with things. It is strong, full of true emotions, and very simple in a way. I did not dare direct it earlier in my life; I was afraid and full of respect. I needed time to mature to direct this opera,” Otava stated.

He added in a brief video at www.snd.sk that it was difficult to include some innate folklore elements but he did not put too much stress on them so that it would not be a folklore opera. The stage and costumes are minimalist and rather toned-down, while nevertheless preserving the atmosphere of a small village with its habits, rituals and traditions, so that emphasis is given to the music and dramatic expression.

The current Bratislava staging is true to the original version that premiered in Brno in 1904. Jenúfa was staged in Prague in 1916 and the then-head of the Prague Opera, Karel Kovařovic, refused to stage it for 12 years, and when he finally did so he significantly changed the author’s original intentions. But that staging was a big success and the opera was performed in this version for many years. The “Kovařovic version” is currently running in Košice under the title Jej pasorkyňa.

The version playing in the Slovak National Theatre in Bratislava is the one that was authorised by Janáček and premiered in Brno but was not returned to the stage until the 1980s. Jenúfa, as presented by the SND, not only has Otava as the guest director but also Czech conductor Jaroslav Kyzlink and renowned Czech soprano Eva Urbanová in one of the casts in the role of Kostelníčka (Lady Beadle). Other guest performers include Miroslav Dvorský, Peter Berger, Oto Klein and Marta Beňačková.

Janáček is one of the better known Czech composers for his works such as Šárka, Počátek románu (The Beginnings of a Romance), Výlety páně Broučka (The Excursions of Mr. Brouček), Katya Kabanova, and Z mrtvého domu (From the House of the Dead) as well as several comic operas.

Jenúfa, or Her Stepdaughter as the opera is better known in Slavonic countries, was a breakthrough for Janáček and brought him success and fame. The programme bulletin notes that the libretto was written by Gabriela Preissová, a Czech, and that it follows in the Verismo operatic style that can be traced back to Pietro Mascagni’s Cavalleria Rusticana that premiered in 1890.

Janáček is famous for taking Moravian dialect and local melodic folk songs as the basis for his music but without false sentiments, the bulletin notes. The opera is staged in the original Moravian dialect of the Czech language, with German subtitles shown in the theatre. Nevertheless, the bulletin in both German and English offers sufficient information to understand the storyline.

Urbanová and Dvorský told a press conference that Jenúfa is a beautiful opera but is very difficult and demanding to perform as it requires a lot of acting and a very sensitive approach. Urbanová admitted the role of Lady Beadle was one of her favourites and added that she had previously sung with Dvorský in the role of Števa, a daring but superficial macho man, but that in this performance he has “matured” to the role of Laca, a more sensitive, empathetic and deeply loving man.

The plot centres on Jenúfa, who is in love with Števa and gets pregnant by him – but Števa is recruited to military service and later he courts the mayor’s daughter. Jenúfa is the stepdaughter of Lady Beadle who, eager to keep her stepdaughter’s delicate condition secret, hides her at home. After she tries in vain to persuade Števa to marry her, she turns to Laca. Laca hesitates – shocked by the news that Jenúfa has a son. Lady Beadle sees the child as only a hindrance to Jenúfa’s future and kills the newborn and the opera culminates in a final turn of events.

Controversy has surrounded the title of the opera and Janáček said he chose the name Jenúfa as a tribute to his daughter Olga, who had some features that found expression in the title role. It took nine years for Janáček to compose the opera and Olga, who had been ill since childhood, died at age 21 shortly before the opera premiered.

The grief, pain and fear for her health and life can be felt in Janáček’s composition and it is widely considered his masterpiece work.