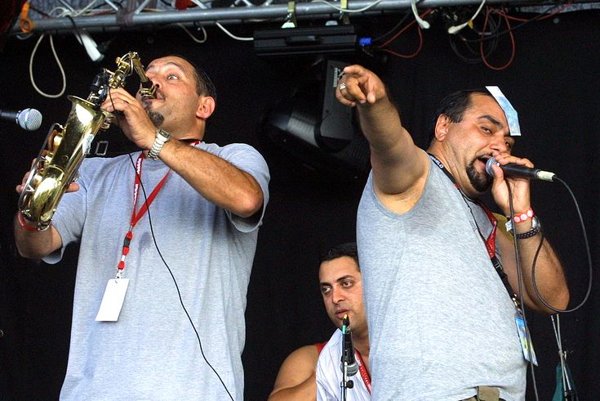 Bratislava
CONCERT:FANFARE Ciocarlia, a Romanian ensemble of Roma-Balkan brass musicians comprising 12 members and based in the village of Zece Prajini, come to give concert at Bratislava’s KC Dunaj culture club on Tuesday, April 17. Their music resembles that heard in Emir Kusturica’s cult movies. The band is also famous from their ‘musical battle’ with Boban & Marko Markovic Orkestar (another famous Balkan brass band); they previously performed in Slovakia, at the Pohoda music festival in Trenčín, last summer. Tickets cost €15 (in advance) or €20 (on the door) and can be purchased through www.kcdunaj.sk. Gadjo.CZ and Malalata Soundsystem will play at the after-party.

Bratislava
MUSEUM: Franz Liszt a jeho bratislavskí priatelia / Franz Liszt and his Bratislava Friends – This exhibition showcases the vivid relationship between the world-renowned composer and the city where he gave his first concert (aged 9), and to which he returned in later life.
Open: Tue-Sun 10:00-17:00 until May 31; Exhibition pavilion Podhradie of the Slovak National Museum, Žižkova 16. Admission: €1.50-€3. Tel: 02/2049-1281; www.snm.sk.

Košice
OPERA:IN MARCH the Košice State Theatre, Hlavná 58, premiered ¬– after a gap of 35 years – the famous opera by Leoš Janáček Jej pastorkyňa / Her Stepdaughter, in the version adapted by Karel Kovařovic. One of Janáček’s most played and most popular works, the Košice production is directed by Michael Tarant and conducted by Robert Jindra, both from the Czech Republic. Singers include Jolana Fogašová, Maida Hundeling, Magda Málková as guests, and also Jaroslav Dvorský, Marek Gurbaľ and Michaela Várady. For the performance on Wednesday, April 18, tickets cost €3.50 to €7 and can be bought though www.sdke.sk and www.navstevnik.sk.

Prešov
HISTORICAL RE-ENACTMENT: The siege of Šariš Castle will be re-enacted on the occasion of the 700th anniversary of the event. The Army of Hungary’s King Charles Robert of Anjou took some time to conquer this castle first time around; this time round it will take only one Sunday afternoon.
Starts: April 22, 14:00; Šariš Castle. Admission: voluntary. More info: www. hrad.wbl.sk.

Starý Smokovec
PHOTO EXHIBITION: Ta-transkí gorali / Tatra Gorals - Bartolomiej Obrochta a Jan Krzeptowski Sabala – Dozens of photographs reflect the era in which these two Tatra Gorals (i.e. ‘highlanders’ living in southern Poland, northern Slovakia and the Silesian part of the Czech Republic) lived. The pair hailed from the Polish side of the Tatras and became famous as guides, musicians, newspaper publishers, hunters, and even bandits (Krzeptowski Sabala).
Open: 9:00-19:00 until April 30; lobby of the Grand Hotel. Admission: free. More info: www.slovakia.travel.sk.