ONLY the actual performance of Robert Fico as a second-term prime minister will show how his ruling style has changed – just as only the first challenges they face will test the ability of his new ministerial nominees. That is the conclusion of two of Slovakia’s leading political analysts. Among the ministerial nominees, the appointment of Tomáš Borec, the chairman of the Slovak Bar Association, as justice minister came as a positive surprise, they commented, while Miroslav Lajčák’s return to the post of foreign minister, while no surprise, is also a plus. 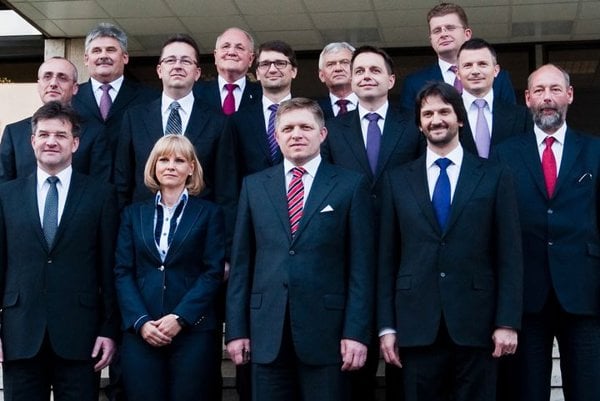 ONLY the actual performance of Robert Fico as a second-term prime minister will show how his ruling style has changed – just as only the first challenges they face will test the ability of his new ministerial nominees. That is the conclusion of two of Slovakia’s leading political analysts. Among the ministerial nominees, the appointment of Tomáš Borec, the chairman of the Slovak Bar Association, as justice minister came as a positive surprise, they commented, while Miroslav Lajčák’s return to the post of foreign minister, while no surprise, is also a plus.

The Slovak Spectator spoke to Grigorij Mesežnikov, president of the Institute for Public Affairs (IVO) think tank, and political analyst Miroslav Kusý. They shared their views on some of the ministerial nominations as well as on how Fico might rule over the next four years.

How will Fico govern?

Regarding possible changes in Fico’s style of governing, Mesežnikov noted that he does not now have to seek compromise as he has no coalition partners. However, the analyst suggest caution over what some other commentators have interpreted as Fico’s increased openness towards the opposition and professional organisations.

“If Fico is more forthcoming, it is only letting the fog out,” Mesežnikov said, adding that there is in fact no such thing. “He has not offered more to the opposition than what he himself received from the former coalition as an opposition politician. The fact that he offered two deputy speaker posts in parliament is not an expression of generosity by a party with a majority but rather a reflection of the fact that we have not had five opposition parties in parliament before.”

According to Mesežnikov, Fico’s real style will emerge only once the party actually starts governing: it will be seen in how laws are pushed through parliament, in how the opposition’s views are considered during the legislative process, and in how oversight bodies and parliamentary committees function.

“We will see how Robert Fico communicates with non-governmental organisations which have concrete proposals, for example the environmental organisations which are now protesting against gold mining [in Kremnica], and we will see how the Economy Ministry is able to communicate with representatives of civil society in various areas,” Mesežnikov said.

Kusý, however, said that certain aspects of Fico’s rule will change since the government is now in a completely different situation from when he entered government in 2006, when there was prosperity and the country was in relatively good shape.

“Now none of these [conditions] apply and Fico does not even have a coalition partner on whom he can place some share of the responsibility,” Kusý said. “It means that he alone will be responsible for the whole project of ruling and thus he has an urge to distribute responsibility through those meetings he organises.”

According to Kusý, Fico is summoning different interest groups to substitute what previously served as the coalition council since he wants “that they at least confirm his decisions”.
Nevertheless, Kusý says it does not really matter whether it is Fico’s pragmatic calculation if the effect will be a wider debate with plausible effects: “just as in the store you do not really care whether the seller smiles because he/she must or because it is in his/her nature.”

Borec’s nomination to the post of justice minister has prompted a generally positive response. Mesežnikov confirmed that the vision of Borec in the justice minister’s role positively surprised him, and that he has a good chance to reform the ministry and the judiciary, which he said is in a serious condition.

“The judiciary, in my opinion, is in a very unfavourable state, thus he has the authority to positively resolve the situation,” Mesežnikov said, adding that Borec has already made a positive move by deciding not to withdraw the disciplinary complaints against Supreme Court President Štefan Harabin filed by his predecessor Lucia Žitňanská over what she termed abuse of power.

Mesežnikov said he does not believe Borec was instructed to do this and interprets the move as an independent decision. He noted that Smer under the first government of Fico supported Harabin, since he was a nominee of its then coalition partner, the Movement for a Democratic Slovakia (HZDS), and that it supported what he called “absolutely scandalous things”.

While it did not come as a surprise, Mesežnikov commented that the nomination of Miroslav Lajčák as foreign minister was a positive move, adding that Smer did not have any better candidate. The appointment indicates that the pool of foreign affairs experts in Smer is rather weak, he said.

“They have reached for an excellent career diplomat because they themselves do not have anyone who can even approach Lajčák’s qualities,” Mesežnikov said.

The nomination of Lajčák did not surprise Kusý either, who said that “he is returning to a post where he previously performed rather well”.

The nomination of Zuzana Zvolenská, who served as chief executive of the privately-owned Dôvera health insurance company as well as its state-owned counterpart, Všeobecná Zdravotná Poisťovňa (VšZP), surprised the pundits and both said they do not expect her to last a full four-year term.

“I think that the life-span of her ministerial term is determined by the term of office of the mayor of Košice [Richard Raši],” Mesežnikov said. Raši served as health minister in the latter half of the first Fico government and may want to return to the job when his current mayoral term expires.
Kusý agreed with Mesežnikov that Zvolenská was a weak choice given all the difficulties that the ministry faces and also expressed doubt about whether she would be able to handle the job.

“I assume that she will be the most loyal minister,” said Mesežnikov. “I do not expect any independent performance there.”

Mesežnikov also noted that unpopular steps, inevitable given the problems of the health-care system, should be taken by someone who “has unquestioned authority in the given department”. She will now have to face the demands of physicians and nurses and the overall situation in the health-care sector, which is quite complicated.

Kusý said that the Ministry of Finance will be of key importance for Fico, and that Peter Kažimír was probably the best choice among those available, and “definitely better than [Fico’s previous finance minister Ján] Počiatek”. He commented that Fico did not have many to choose from among his own people.

“Kažimír, at least so far, has come across as a capable economist in the area of finance; we will see how he operates in real life,” Kusý said.

Mesežnikov said he expects that along with finance, the ministries of labour, economy and interior will have a significant role in the government’s four-year tenure, as well as in terms of Smer’s declared agenda.

“The top posts at these ministries – except for that of economy, which is a different issue – were filled with strong partisan nominations, by people who are loyal to Smer and Robert Fico, and I would say are well-tested persons,” Mesežnikov told The Slovak Spectator, adding that along with a certain degree of ‘reliability’ the nominees – Robert Kaliňák, Ján Richter and Tomáš Malatinský – were also acceptable to the interest groups behind Smer.

One aspect of Fico’s ministerial choices that Kusý identified as highly negative was his decision not to appoint a deputy prime minister for human rights.

“It [the role] was an achievement that meant a lot in this area and Slovakia has many dues in the area of human rights,” Kusý said, adding that having been created it should have been kept. “The fact that they have failed to preserve it is a huge step backwards.”

According to Mesežnikov, the fact that Slovakia will not have such a deputy prime minister is a telling detail, since if the government was really attuned to cooperation and dialogue it would have preserved the position.