STRONGER links between educational institutions and businesses, an accent on technical fields of study, more money for universities that conduct research and development, and an overall approach that is more responsive to the needs of the labour market: these are the first themes that Education Minister Dušan Čaplovič has offered to those who are seriously concerned about the condition of the education sector in Slovakia. With Slovakia currently sporting one of the highest youth unemployment rates in the European Union, the challenge of reversing the current trend of producing unemployable graduates is clear. 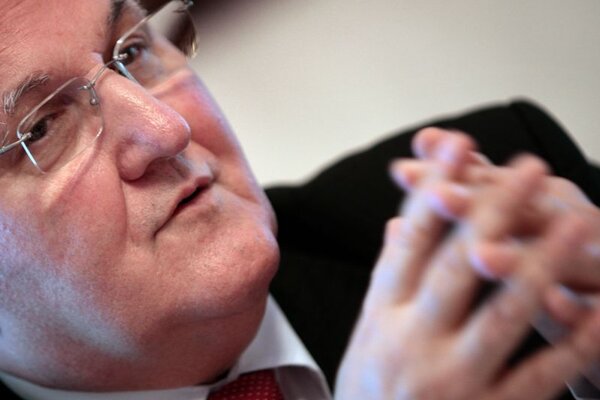 STRONGER links between educational institutions and businesses, an accent on technical fields of study, more money for universities that conduct research and development, and an overall approach that is more responsive to the needs of the labour market: these are the first themes that Education Minister Dušan Čaplovič has offered to those who are seriously concerned about the condition of the education sector in Slovakia. With Slovakia currently sporting one of the highest youth unemployment rates in the European Union, the challenge of reversing the current trend of producing unemployable graduates is clear.

Human resource and education professionals say that the minister faces a very complex situation and are urging reform to secure better quality training, a revamp of the vocational training system, and a focus on foreseeing the needs of the labour market.

They also say that even if some of these goals seem unrealistic to begin with, the state must still start doing something about the situation.

Čaplovič, a Smer nominee who previously served as deputy prime minister for human rights, believes that if schools adjust to the needs of employers, the youth unemployment rate, which has lately climbed to nearly 35 percent, will fall.

“I see an outcome in the correct tuning of elementary, secondary and university education, and an honest search to answer the question: Does Slovakia need every year hundreds of graduates from fields which domestic and foreign investors and employers do not need?” Čaplovič said in a comment published by Sme.sk.

It is first necessary to better prepare secondary school graduates, according to Luboš Sirota, director general of the Slovak branch of Trenkwalder, a human resource company.

“It does not make sense sending more students to secondary vocational schools if their quality does not increase and if they produce thousands of school leavers in fields the market is not interested in, for example hairdressers, waiters, cooks, etc,” Sirota told The Slovak Spectator. “The state needs to create a mechanism which will motivate the founders of schools to open programmes for which there is more interest in the labour market.”

At the same time education should be tightly interconnected with practice, said Sirota. However, he also admits that for any significant change in the structure of vocational training there might be some capacities missing on the part of educators and thus at least some education should be moved under the patronage of firms.

“Yet these must be motivated in a corresponding manner, either by direct subsidies, while meeting strictly defined indicators of quality, or through tax holidays,” said Sirota. “In addition to that, enlightenment is also necessary at elementary schools, for example in the form of career advice for students and their parents.”

According to Sirota, this should motivate people to study specialisations which have potential, as opposed to traditional ones such as hairdresser, cook or waiter.

Martin Krekáč, chairman of Jenewein Group and president of the Business Alliance of Slovakia (PAS), agreed that the system of vocational training needs to be changed.

“It should be based on high quality information on developments in the labour market and the needs of employers, and not first of all on the wishes of parents and children or the desires and capacity of schools,” Krekáč told The Slovak Spectator.

Successful countries use several complementary methods for foreseeing the needs of the market, said Krekáč, listing methods such as economic modelling, sector consultancy, which among other things maintains contact between schools and business, and comprehensive sector analysis. He added that surveys also work in some countries, for example in France participation in such surveys is mandatory and in Great Britain every two years 70,000 companies are contacted. These methods, according to Krekáč, also involve monitoring the success of schools based on the number of employable graduates or evaluation of the effectiveness of requalification and further education, as applies in Denmark.

Krekáč also said that first of all employers and labour offices, as representatives of the labour market, must be able to define the needs of the market to which the performance of schools must subsequently be adjusted.

“It is very pleasant to say that everyone is entitled to education based on their own decision, but the state must carry responsibility also for the chances of employing graduates and for the effectiveness of the funds poured into education,” Krekáč said. “If these are directed to unemployment then they are certainly not being used effectively.”

Krekáč also referred to a letter by the president of the European Commission calling on Slovakia to adopt effective measures to address its high youth unemployment rates; he says this letter was one of the documents that outgoing prime minister Iveta Radičová handed to her successor Robert Fico.

The role of firms

Theoretical preparation at vocational training schools will be secured by the state while the future employer of these schools’ graduates, i.e. firms, will secure practical training, said Čaplovič, as quoted by SITA newswire. He also suggested that several professional schools should therefore become company schools, and said he also intends to revitalise vocational training in relation to small and medium-sized businesses.

“This model could work in practice, yet tuning of specific conditions is important,” said Sirota. “Employers cannot fully supplement the role of the education system but they should have a significant say in the content of the teaching at vocational schools, whether it is in the phase of creating study curricula and criteria for measuring the quality of education or in providing internships.”

Since the whole process is very costly the state should create additional tax mechanisms which would make it possible for companies to participate in the education of young people, Sirota added.

Krekáč said that even if to begin with the scheme does not appear realistic, it is necessary to make progress towards carrying it out. According to him, it is necessary to make employers and their associations more interested in the system of vocational preparation. Everywhere else in the developed parts of Europe this is how it works: there are functioning examples from Austria or Germany, he added.

“Without the participation of employers it is not possible to achieve success in professional training,” Krekáč said. “Some time ago, it was precisely vocational training and its level that was our pride and competitive advantage.”

As for additional challenges, one such is reform of university education, which also needs to move closer to the needs of practical knowledge, said Sirota.

“Currently only approximately one quarter of students are studying at technical departments of Slovak universities, which does not correspond with the structure of the Slovak economy,” said Sirota. “This is why it is necessary to interlink secondary and university education, and thus make possible the continuing education of young people at all levels of study.”

According to Krekáč, there must be a change in the system of school financing as well as the establishment and financing of private schools.

“Schools must be financed based on the difficulty level of the field, [the money required to] modernise the school, as well as the employment of graduates on the labour market,” said Krekáč.

Recent years have shown that schools have become quite a good way of attracting money from the state budget, he said. Yet, the state must also pay more attention to further education of teachers, especially at secondary vocational schools. Given that the education process and preparations for the workplace must start at elementary schools it is necessary for the state to address the total absence of practical and technical preparation for careers there, so that not just the ambition but also the ability of students is addressed, Krekáč said.