SDKÚ and SaS lick their wounds

THE GOVERNMENT of Prime Minister Robert Fico is moving toward full speed while two of the centre-right parties in the previous four-party governing coalition are still licking their wounds from the election on March 10 and deciding how to revamp their leadership and lay out better political prescriptions that connect better with voters in the future. 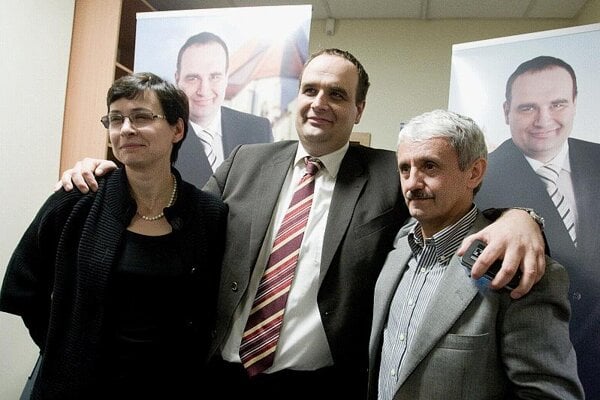 THE GOVERNMENT of Prime Minister Robert Fico is moving toward full speed while two of the centre-right parties in the previous four-party governing coalition are still licking their wounds from the election on March 10 and deciding how to revamp their leadership and lay out better political prescriptions that connect better with voters in the future.

The Slovak Democratic and Christian Union (SDKÚ) will elect a new leader in May, after Mikuláš Dzurinda announced that he would not seek re-election as chairman – or any other top position in the party – at its upcoming party congress. And Jozef Mihál, a deputy chair of Freedom and Solidarity (SaS) party who served as labour minister in the past government, has stepped down from his party post in response to his poor showing in attracting preferential votes on the SaS ballot.

A political analyst told The Slovak Spectator that these two parties will have to go much further than just changing a few faces at the top to regain votes and that steps toward renewal might require a more thorough reorganisation of party approaches and policies.

The SDKÚ, which over the past decade was considered the leading party on the right, saw its support plunge to 6.09 percent in the March 10 general election, barely above the 5-percent threshold to enter parliament. Dzurinda, who has been politically active for 21 years and served as prime minister between 1998 and 2006, has said he takes full responsibility for his party’s dismal results this March. The election of a new SDKÚ leader will take place at its congress scheduled for May 19 in Banská Bystrica.

Žitňanská and Frešo in the race and perhaps Novotný

“We will gain the trust of voters only if we present a new approach,” said former justice minister Lucia Žitňanská from SDKÚ to a news conference on April 18, while reconfirming that she will seek to lead the party. “We can have it [trust] only if we tell the truth to ourselves about what happened within the SDKÚ and the reasons for its fall.”

Žitňanská, who owes her relatively positive public image to launching reforms in the country’s judiciary, had stated before the March 10 general election that she would seek the top post in the party if she received a high number of preferential votes among SDKÚ voters. She received 103,517 preferential votes, the highest of any candidates on SDKÚ’s ballot. Žitňanská, currently a deputy chair of the party, told the press conference that she had decided to seek the chair at a most difficult time, when it was not clear if the party would make it to parliament.

Žitňanská will not be the only candidate seeking the top post in the SDKÚ as Pavol Frešo, the president of the Bratislava Self-Governing Region, also announced his intention to run. Frešo apparently enjoys strong support from regional and district levels of the party: the SITA newswire reported that 26 local party organisations have endorsed his candidacy, while Žitňanská has the support of only five at this time. Frešo had earlier said he would seek the top post only if he had strong backing from regional party organisations.

Frešo stated on his Facebook page on April 18 that the party should return to “its Christian and democratic roots” and reproached his party for what he termed a loss of contact with citizens, while adding that at the Bratislava regional level he has managed to preserve that connection.

SDKÚ MP Viliam Novotný, who hails from eastern Slovakia, is also weighing a decision to enter the race after the local party organisation in Košice endorsed him on April 16. He said his decision will depend on how much support he receives throughout the country, stating: “If someone wants to be party chairman, he should have the support of the whole country,” as quoted by the TASR newswire.
Juraj Marušiak from the Institute of Political Science of the Slovak Academy of Sciences told The Slovak Spectator that a head-to-head race between Žitňanská and Frešo will not only involve two individuals but also a clash of future values for the party.

“Frešo believes the party should move towards a more conservative platform, which also means strengthening the social, cultural and Christian dimension [of the party],” Marušiak stated, adding that he thinks Žitňanská will more or less follow the party’s current policy prescriptions.

Marušiak added that Frešo’s weakness might be that he has mostly positioned himself as a regional politician from Bratislava and if he wants to connect with members and supporters of SDKÚ across the country he will need to be more active in state-level political issues.

“Žitňanská’s weakness might be her mildness and closeness to Dzurinda,” Marušiak stated in his evaluation of the current deputy chair of the party.

Dzurinda said earlier this year that he would support Žitňanská’s leadership bid, adding that he was pleased she had shown an interest in becoming chair of the party.

Regarding the steps the SDKÚ should take to regain wider public support, Marušiak said there is a possibility to capture more liberal voters because Freedom and Solidarity party, which has billed itself as a liberal party, has not been successful in delivering on its agenda, while also adding that SDKÚ could also seek to appeal to more conservative voters.

“The party has to make its own decision,” Marušiak stated. “But under Slovak conditions a kind of conservative grouping would obviously be more successful; in that case the conservative groupings would have to overcome their aversion [to the SDKÚ] and somehow revamp this part of the political spectrum.”

Marušiak opined that it does not make much sense for there to be a liberal SDKÚ to go along with a liberal SaS while also observing that having a conservative SDKÚ to accompany a conservative Christian Democratic Movement (KDH) might also be problematic.

“So far, the SDKÚ has played the role as leader of the right wing, standing against HZDS [the Movement for a Democratic Slovakia, chaired by Vladimír Mečiar] and Smer and as a party that wants to wrap up the [country’s] economic transformation, but such a message will not be enough at this time and the party must formulate its policies in a different way,” Marušiak stated.

When asked if there was any one individual within the SDKÚ who could return the party to its level of popularity before the Gorilla file was published and other party scandals were revealed, Marušiak responded that it was Iveta Radičová, the former prime minister, who has said she will leave the SDKÚ before its upcoming congress.

Freedom and Solidarity (SaS) party made it to parliament with 5.88 percent of the votes on March 10, half its level of support in 2010.

Several members of SaS have denied to the media that the departure of former labour minister Mihál as a party leader is an indicator of dissension within the party. Party leaders met on April 12 to discuss its current situation and the Aktualne.sk news website speculated after the meeting that the party has two groupings: one critical of the leadership of chairman Richard Sulík and another backing him.

Sulík afterwards told the SITA newswire that the media information had affected the atmosphere of the party meeting but described the reports as “largely nonsense”.

Daniel Krajcer, the former culture minister nominated by SaS, told SITA that Mihál’s resignation in the face of his lower than expected preferential votes has been overblown by the media.

Marušiak said he does not expect any open conflict to be visible within SaS in the near future.

“Nevertheless, certain criticism of the chairman might emerge,” Marušiak told The Slovak Spectator, adding that he does not think that this would lead to the quick disintegration of the party. He predicted that if any conflicts do emerge they will come only in several months. “SaS would gain very little from such a situation [of open conflict].”

Marušiak said he does foresee moves to change some individuals in SaS’ leadership posts in an attempt to regain public support emphasising that Sulík was largely responsible for creating the party and retains significant influence in terms of party financing, selection of leaders and candidates.

“It is true that to a certain degree the party owes its success to Sulík and his positioning himself as the enfant terrible of Slovak politics, one which goes beyond the conventional political style,” Marušiak told The Slovak Spectator, while adding that in a “race” for political uniqueness Igor Matovič of Ordinary People and Independent Personalities (OĽaNO) will very easily outshine Sulík.

Sulík came in for blistering criticism after his relationship with businessman Marián Kočner came to light in late February this year as the election campaign moved into its final two weeks. Video recordings emerged revealing that Sulík, then speaker of parliament, had regularly informed Kočner, who has no government or party position but has featured in several political controversies over the past two decades, about the tortuous political process in parliament in late 2010 to choose Slovakia’s general prosecutor. It emerged that Sulík had also asked Kočner to screen some of SaS’ potential candidates prior to the 2010 general election.