Three hats in the ring

LUCIA Žitňanská, Pavol Frešo and Viliam Novotný all have their hats in the ring to replace Mikuláš Dzurinda as chair of the Slovak Democratic and Christian Union (SDKÚ). For the first time since the party was founded it is not clear who will lead the party for the next couple of years as the clock ticks down to just two weeks before the party’s congress scheduled for May 19. Dzurinda, who has chaired the party since its inception in 2000, announced two days after the March 10 general election that he would not seek the post again. Dzurinda had never faced any serious challenger during his years as party leader. 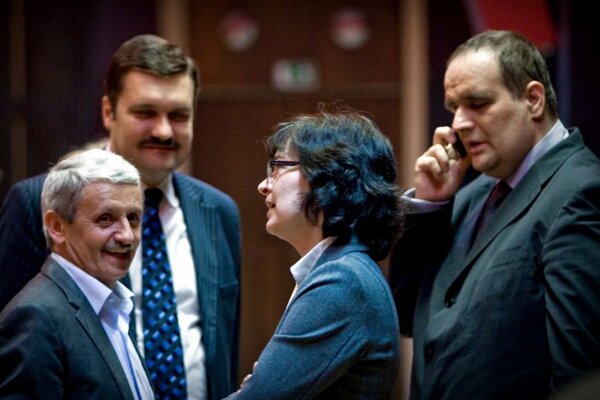 LUCIA Žitňanská, Pavol Frešo and Viliam Novotný all have their hats in the ring to replace Mikuláš Dzurinda as chair of the Slovak Democratic and Christian Union (SDKÚ). For the first time since the party was founded it is not clear who will lead the party for the next couple of years as the clock ticks down to just two weeks before the party’s congress scheduled for May 19. Dzurinda, who has chaired the party since its inception in 2000, announced two days after the March 10 general election that he would not seek the post again. Dzurinda had never faced any serious challenger during his years as party leader.

The SDKÚ, which has been viewed as the leading party on the right over the last decade, saw its support in the March vote plunge to 6.09 percent, barely above the 5-percent threshold required to enter parliament. The party is now facing a challenging future. A private poll recently conducted by the Focus polling agency at the request of the party reportedly indicates that the SDKÚ’s popularity continued to fall after the election and the party had the support of only 4 percent of those polled, according to information published by the Hospodárske Noviny daily.

“First of all, the positive thing is that something has moved in this party,” political scientist Miroslav Kusý told The Slovak Spectator. “As long as Dzurinda was there it was a sort of static image. He dominated the whole party in such a way that when there were annual meetings it did not even occur to party members to consider other candidates; he has never had any challenger.”

Kusý added that only now, since Dzurinda has stepped down, can the party begin moving in a different direction.

On April 23 Dzurinda refused to comment on the three candidates, telling journalists that he would not intervene in the election of the new chair, the SITA newswire reported.

While all three candidates are promising winds of change, pundits say the choice will likely come down to either Lucia Žitňanská, the former justice minister, or Pavol Frešo, the president of the Bratislava Self-Governing Region, and the race will be decided by how radical a change the congress delegates want.

“I am running for the SDKÚ chair to table a new offer for the voters, not for just painting the façade or giving a new sticker to the party,” Žitňanská wrote on her blog on Sme.sk.

Žitňanská, who owes her relatively positive public image to her stewardship of judicial reforms during the last government, said that the party should offer voters a new set of policies to address their justified demands.

Speaking with journalists on April 24, the former justice minister said that the basis of trust between the SDKÚ and voters will be decided on its ability to respond to any doubts about the behaviour of its party officials, along with the ability to make immediate corrections, the SITA newswire reported.

Making his first pitch to the general public, Frešo said that the SDKÚ often acted in contradiction to its programme and values and that he attributes the party’s poor results on March 10 to several questionable deals involving party officials, such as the sale of platinum filters at below-market price by the State Material Reserves, headed by a SDKÚ nominee and the leasing of a tax office building in Košice that involved the Finance Ministry and a regional party official, the TASR newswire wrote.

“The loose handling of the Gorilla case and the untrustworthy communication of leaders in combination with the effective strategy of opponents led this [Gorilla] case to fall mostly at the door of SDKÚ, despite the fact that it concerned almost all the parties,” Frešo stated, as quoted by SITA, adding that this weakened the credibility of the party in its stated fight against corruption.

Pundits agree that one of the factors that seriously damaged the party was the SDKÚ’s inability to effectively respond to serious allegations after internet publication of the so-called Gorilla file, an unverified document based on bugging of an apartment by the Slovak intelligence service that purportedly describes high-level political corruption in 2005-6 during the second government headed by Dzurinda.

“We must never forget that reforms are not the goal of politics, but the tools that help to improve people’s lives,” Žitňanská told the media, adding that the SDKÚ will not, however, get lured into superficial politics which “mistakes the ability of listening to the voter” with conveying messages with “empty rhetoric and gestures”.

Frešo said he envisions the SDKÚ as a people’s party, in contrast to what he said has been an elite party until now. He added that the party’s position in the centre-right bloc needs to be redefined and suggested that the future SDKÚ should be centred on Christian values and view family and marriage as the foundation of society, TASR reported.

Frešo wants to see the SDKÚ viewed as the successor to the Democratic Party, which he said emerged in 1944 out of the fight against the Nazi regime and which combined civic and Christian forces with a desire to push for democratic principles, SITA wrote.

“Mr Frešo belongs among those old original members and joined the process of building the SDKÚ party with his Democratic Party,” Kusý told The Slovak Spectator, adding that since Frešo became head of the Bratislava Self-Governing Region in 2009 he has not been very visible at the top levels of the party and did not participate in the internal party struggles between Dzurinda and former prime minister Iveta Radičová. “This is a certain benefit for him,” Kusý noted.

Commenting on the position of Žitňanská in the party, Kusý said that she became quite visible while serving as justice minister for 20 months even though she is a fairly new member of SDKÚ.

“She has a story similar to Radičová – she came to the party later and she has never really got intertwined with the party structures, especially outside Bratislava,” Kusý said. “Yet she has fairly large support among the public and perhaps less support from party structures, though that is now starting to change.”

Kusý opined that Žitňanská’s main weakness is that she has been seen as too close to the senior leadership of the party, adding that she is “Dzurinda’s de facto nominee” to be chair.

Frešo has been more disconnected from the top leadership of the party since being elected to his regional government post and was much less closely connected to recent disputes within the party leadership, Kusý said.

Novotný announced his candidacy on April 23, explaining at a news conference that he had decided to accept the nomination of the SDKÚ’s Košice municipal coordination committee, and the support of ten other local branches of the party that endorsed him.

“I feel support from all regions of Slovakia,” Novotný stated, as quoted by SITA. “I will introduce a clear offer of changes in the party. The SDKÚ needs a radical change: a change of leaders, organisation, and style of doing politics.”

Novotný added that the SDKÚ has immense expert potential within its ranks and he wants to tap into that for the benefit of citizens.

“Mr Novotný is there to boost numbers and is entering the race to secure a good position for himself in the leadership of the party,” Kusý stated. “It is not assumed that he has any real chance.”