CONSOLIDATION of public finances in Slovakia, which is one of the poorest countries in the EU, has a moral aspect and the state cannot expect people who live on low pensions to carry the cost of repairing the state’s finances. Prime Minister Robert Fico delivered this message to the president of the European Commission, José Manuel Barroso, during his first official trip to Brussels since taking office on April 4. 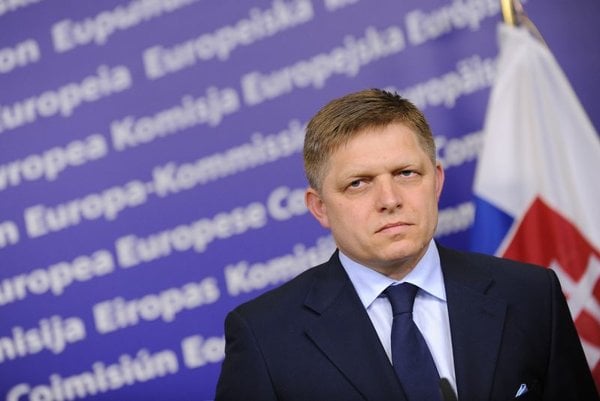 CONSOLIDATION of public finances in Slovakia, which is one of the poorest countries in the EU, has a moral aspect and the state cannot expect people who live on low pensions to carry the cost of repairing the state’s finances. Prime Minister Robert Fico delivered this message to the president of the European Commission, José Manuel Barroso, during his first official trip to Brussels since taking office on April 4.

“On behalf of the Slovak government I have clearly defined the attitude that we cannot focus only on cuts but that we very much care about a programme of support for economic growth and creation of jobs,” Fico stated on April 25, as quoted by the SITA newswire. He has said several times that Slovakia will be unable to undergo massive cuts in public spending.

Barroso restated after meeting Fico on April 24 that consolidation of public finances and economic growth is a huge challenge and added that he is convinced that the Slovak government will share in the efforts to help Europe emerge from its sovereign debt crisis and slow growth.

However, Fico told the media that during his trip he had received several recommendations that, among others, “Slovakia should undergo pro-growth cuts, which is practically impossible”. He did not explain exactly what constituted a ‘pro-growth cut’.

Fico also told the president of the European Parliament, Martin Schulz, that “in a country where the living standard is very high, it is possible to make cuts and lower the living standard – but what do you take from a man who lives on a pension of €250?”, SITA reported.

Fico, who is refusing to contemplate a rise in VAT, also said that he plans to consult on all Slovakia’s austerity measures with the EC in advance so that he can avoid adopting policies “and then [have to] come to consult on it with the EC”.

The deficit for 2012 is projected to be 4.6 percent of GDP, but Finance Minister Peter Kažimír said on April 12 that achieving the plan would be problematic because of a cash crisis in the health-care sector.

All EU countries are supposed to be targeting a deficit of no more than 3 percent of GDP.
“We have been suggesting that the deficit planned by [the government of Iveta] Radičová at 4.6 percent will not be kept and that it will most probably approach 5 percent,” Fico said, after updating Barroso on developments in Slovakia.

Slovakia’s government closed last year with a deficit of 4.8 percent of GDP, according to the EU statistics office, Eurostat. That figure included loans to state-run hospitals and railway companies, although the loans were actually made between 2008 and 2010 during the first Fico government.

They increased the deficit by €633 million, or about 0.9 percent of GDP, the SITA newswire wrote, citing the Eurostat report.

Additional funds from the EU for decommissioning of Slovakia’s V1 nuclear power plant in Jaslovské Bohunice was another issue that Fico discussed in Brussels.

Fico said that Slovakia was required to agree to close the two nuclear reactors of the V1 plant before being allowed to join the EU, even though he said the facilities were fully functioning and safe.

“The removal of nuclear facilities is extremely costly,” Fico said, as quoted by the TASR newswire. “The European Union is planning to provide over €100 million to Slovakia, but our experts have proven that more than €400 million will be needed towards their removal.”

Fico asked Barroso to ask the EC to re-assess the sum that it will contribute to the project.
“It is impossible to consolidate public finances, cater to securing economic growth, create new jobs and use our own budget resources for disposal of nuclear facilities all at the same time,” said Fico. He did not specify whether he had received any specific response from Barroso, TASR wrote.

The first of the two reactor units of the V1 plant at Jaslovské Bohunice, which was built to a Soviet VVER 440/230 design, was shut down on December 31, 2006 to fulfil the obligation Slovakia assumed when joining the European Union in 2004.

The second unit was unplugged from the electricity grid on December 31, 2008.

Environmentalists welcomed Fico’s statements about the need to increase EU funding for the decommissioning of Jaslovské Bohunice. Andrea Zlatňanská of Greenpeace Slovensko said her organisation agrees that the process of decommissioning nuclear power plants is very expensive and more assistance is needed, TASR reported.