PROFESSORS at the Slovak University of Agriculture (SPU) in Nitra are teaching visiting Indonesians how to grow wheat in their country, with the first five students starting their studies in mid April. The objective is to make these and future students experts in how to grow this crop in their tropical Asian homeland. 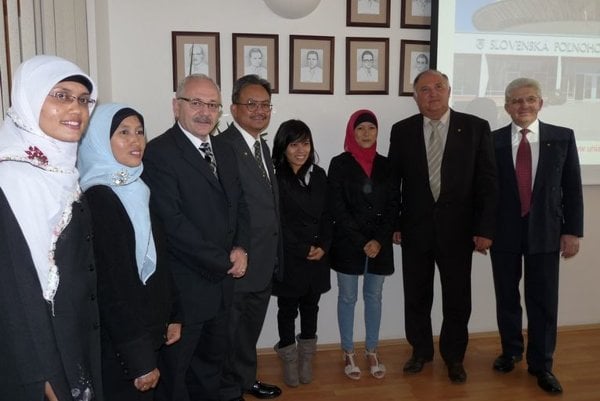 PROFESSORS at the Slovak University of Agriculture (SPU) in Nitra are teaching visiting Indonesians how to grow wheat in their country, with the first five students starting their studies in mid April. The objective is to make these and future students experts in how to grow this crop in their tropical Asian homeland.

“They should leave this university with knowledge that probably no student in Indonesia has,” Peter Bielik, rector of the SPU, told The Slovak Spectator, adding that the five students will learn about all aspects of growing wheat, such as preparing the soil, seeding and harvesting during their three-month study programme.

Harsha E. Joesoef, the Ambassador of the Republic of Indonesia to Slovakia, told the SITA newswire that the study programme is needed because an increasing number of Indonesians are eating food products such as pasta made from wheat-based flour.

“Statistics show that a growing number of people in Indonesia are consuming this type of food,” Joesoef stated, as quoted by SITA. He added that his country has no history of growing this crop so wheat or wheat flour must be imported and his government wants to explore ways to ameliorate this dependence on imports. “We addressed an offer to Slovakia, which is known for its experts in agriculture,” the ambassador told SITA.

The memorandum of cooperation was signed in autumn 2011 in Jakarta, the Indonesian capital, by representatives of the SPU, Osivo Zvolen company and Andalas University of Sumatra in the presence of Slovak President Ivan Gašparovič.

Elena Horská, the vicerector of the SPU, told The Slovak Spectator that Osivo Zvolen, a company that develops certified seeds, in cooperation with the SPU’s Institute for the Protection of Biodiversity
and Biological Safety, prepared the draft project for cooperation with Andalas University.

The study programme includes hands-on work that will be carried out in cooperation with Osivo Zvolen and Istropol Solary, a company in Horné Mýto that is expert in cultivating new varieties of field crops, the university stated on its website. Horská explained that the study programme is tailormade to the requests of the Indonesian government.

“We prepared special modules for the students, who will be educated by professors of our university in English,” Bielik told The Slovak Spectator. He said the students will carry out some of their experimental activities at the two companies’ facilities.

Bielik added that most class modules are specially prepared for each student as the five are expected to be experts in various aspects of wheat cultivation, such as protection against diseases and pests and harvesting methods, after they return to Indonesia.

Horská stated that the university is considering whether to expand its offerings and prepare a similar study programme focused on growing barley and even its use as an ingredient in brewing beer.

“It is a great prospect for the SPU,” Horská told The Slovak Spectator.

The vice-rector added that Indonesia lacks proper mechanical equipment for growing and harvesting both wheat and barley and this presents an opportunity for the SPU’s Technical Faculty to take up the challenge. That faculty is discussing various approaches with Slovak companies that have experience and proper technology for agricultural production in tropical climates.

The university wants to expand its activities to the Philippines and Malaysia because of the burgeoning interest in growing more temperate crops in tropical countries, Bielik said.

“We can start to educate not only foreign experts but also our own experts who can then operate in other countries,” Bielik told The Slovak Spectator, adding that this will enhance Slovakia’s prestige abroad.

Bielik said that the SPU is considering an exchange programme in which the university would send some Slovak students to Indonesia to study their culture, language and international relationships with scholarship support coming from the Indonesian government.

Both the Slovaks and the Indonesians involved in the study programme expect that this cooperation will be successful and the rector expressed his belief that the studies and the students’ experiments will be productive and promising.

The Indonesian ambassador told SITA that his government is very optimistic about the success of wheat farming in his country.

“We tried it experimentally and the harvest in October 2011 was very successful so it seems that wheat can be grown even in tropical areas.”