FOR THOSE who yearn for street markets like the ones found in London or Paris, Bratislava offers, albeit irregularly, the Dobrý Trh (Good Market) event. After the last such market in September 2011, another Dobrý Trh took place on Saturday, March 24, on Panenská Street, near the city centre. 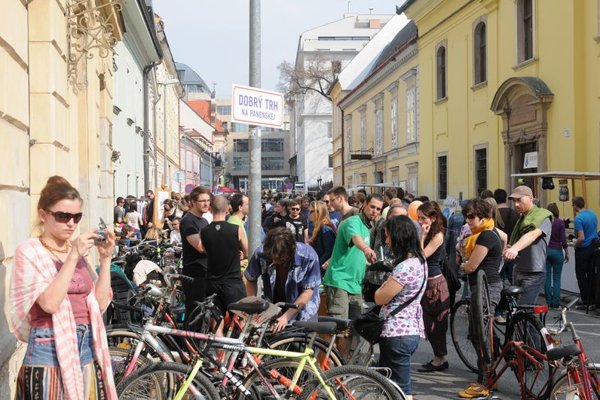 FOR THOSE who yearn for street markets like the ones found in London or Paris, Bratislava offers, albeit irregularly, the Dobrý Trh (Good Market) event. After the last such market in September 2011, another Dobrý Trh took place on Saturday, March 24, on Panenská Street, near the city centre.

“I consider the establishment of Dobrý Trh as the renewal of traditions of a market, not as a means of [making a] purchase, but mainly as social enjoyment which has been my goal since I accepted my position,” Bratislava Staré Mesto (Old Town) Mayor Táňa Rosová, who is also the patron and co-organiser of the event, told the TASR newswire.

The idea was initiated by the Punkt civic association, which was founded in 2007 with the aim of promoting and supporting research and reflection within design, architecture and visual arts. It also states its intention as being to bring professional matters closer to the wider public.

“The whole idea was inspired by my experience as a Dutch person and my love for markets and public events,” Illah van Oijen from Punkt told The Slovak Spectator. “Another organiser from Punkt, Barbara Zavarská, had just returned from London and when we started meeting, this idea came up immediately. I missed the markets from the Netherlands, and she missed the markets from London. But the context is broader: small markets are disappearing and people tend to go to shopping malls at weekends instead. We wanted to give life back to the city, to its streets. And Panenská Street was picked because of the location, and the community functioning in that neighbourhood,” she explained.

The most recent market included not just food stalls, old books, homemade honey and bakery products, but also wafers, organic products, wines and designer goods. People could get their bicycles or inline skates repaired. Roma music, drumming workshops and the Funny Fellows band enlivened the market. Asked how vendors and stalls were picked, van Oijen replied that they wanted to have sellers of the broadest possible type, not just greengrocers, and that they gave preference to local shops and local goods. They wanted to surprise people who sometimes do not know what is happening in their own neighbourhoods. Products connected with other cultures, such as Oriental food, good coffee, and things otherwise difficult to find, were welcome too.

“We selected sellers based on quality. The market is called Good Market, so we wanted only good things to be sold there,” Zavarská explained to TASR.

The weather proved capricious, with initial sunshine later turning to rain. This did not, however, dissuade thousands of people from visiting the relatively narrow street, which often proved too small for the crowds. Starting at 10:00 and ending at about 16:00, the event drew a total of 6,000 people, both Bratislava residents and visitors, Staré Mesto spokesman Tomáš Halán informed.

“This market exceeded all our expectations,” van Oijen said. “The cooperation with Staré Mesto was wonderful, very open, but what was really surprising was the support and cooperation with people working in the street, shops, locals. At first it seemed that nobody could believe in the market becoming a reality, but when they saw it could be done, they started to beam with enthusiasm. It is great if we, the organisers, can rely on people from the neighbourhood to come [forward] with their own ideas. I have never experienced something like that in my life,” van Oijen, a Dutch photographer who lives in Slovakia, stressed. “And that also goes for the Evangelical Church in Panenská, which opened its garden, as it had done before for some community events. This was very important for the project; this garden is a gem and it is wonderful to open it for the public. It is very nice and symbolic when you see organisations and individuals open their doors – and not just for the market. This helps boost the spirit of community.”

Asked if she herself had bought anything at the market, she said she did so every time and that this time she had been lucky enough to snare “an amazing first-flush Darjeeling tea”, plus hemp bread from an organic bakery from Modra. She added it was important for her to go around and taste the market for herself.

It is planned that the market will be held four to five times a year, during the warmer months. The next date has been set for May 12, with more expected to come some time in June or July. September 15 has also been fixed as a future date.

Mayor Rosová added for TASR that she liked the idea so much that it had inspired her to try to revive other parts of the Old Town district, for example Jakubovo Square and Chorvátska Street.