FRIENDSHIP and mutual respect are not always evident in relations between Slovakia and its southern neighbour, Hungary. Some have worried that Robert Fico’s return as prime minister might reignite the tense atmosphere that marked his first term in office, but political experts say the situation is now quite different. Nevertheless, Hungary’s dual citizenship law and Slovakia’s counter amendment to its citizenship law remain a thorny issue. 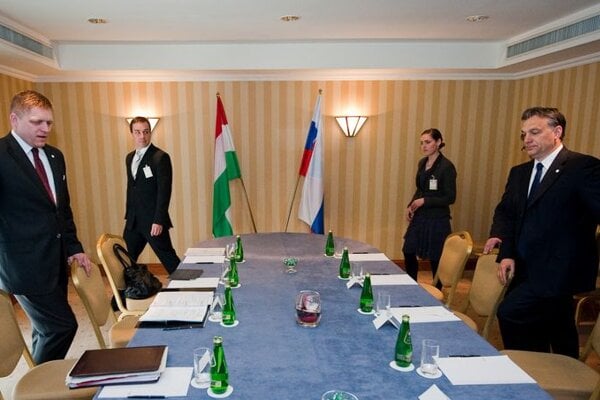 FRIENDSHIP and mutual respect are not always evident in relations between Slovakia and its southern neighbour, Hungary. Some have worried that Robert Fico’s return as prime minister might reignite the tense atmosphere that marked his first term in office, but political experts say the situation is now quite different. Nevertheless, Hungary’s dual citizenship law and Slovakia’s counter amendment to its citizenship law remain a thorny issue.

Prime Minister Fico said on April 16 that his government needs to modify Slovakia’s citizenship law once again so that it does not damage Slovak citizens who apply for citizenship of another country. The current law allows Slovaks who do so to be stripped of their Slovak citizenship. But the prime minister added that “of course, this law must continue to apply in relation to Hungary, because their law is still in force, to which we responded with this [Slovak] legislation,” as quoted by the SITA newswire.

Citizenship issues became heated after Hungary passed a law in 2010, shortly after Viktor Orbán became prime minister, making it easier for ethnic Hungarians living outside Hungary to acquire Hungarian citizenship. The Slovak government in early 2010, which then included the nationalist Slovak National Party (SNS) as well as Fico’s Smer party and the Movement for a Democratic Slovakia (HZDS), reacted to the Hungarian law by passing an amendment to Slovakia’s citizenship law that allows any Slovak who acquires another country’s citizenship to be stripped of their Slovak citizenship.

A member of the Hungarian parliament, Zsolt Semjen, told Hungarian public-service television that if the Slovak government proceeds with Fico’s approach, his country will take legal action at the international level and asserted that Hungary would have a 100-percent likelihood of success, SITA reported.

Not the best start

Dual citizenship was a hot issue in the first government led by Fico and political analyst Grigorij Mesežnikov told The Slovak Spectator that the prime minister’s statement was not surprising.

“It is not a good start for Slovak-Hungarian relations,” Mesežnikov stated, while adding that he does not expect bilateral relations between the two countries to be as heated as they were towards the end of Fico’s first government.

Mesežnikov noted that if the Slovak government pursues a change to the Slovak citizenship law as Fico suggested, Hungary will have a strong card in its hand and added that Slovakia does not “stand a chance in a potential conflict [with Hungary] on the European level”.

“Fico is trying to play this safe,” opined political analyst Ábel Ravasz in comments for The Slovak Spectator, saying the prime minister does not want to take the blame for Slovaks who lose their citizenship when they receive another country’s passport, but at the same time does not want to back off from resistance to the Hungarian dual-citizenship law.

“His proposed solution aims to be the best of both worlds; helping Slovak nationals in [other] foreign countries while keeping the ‘Hungarian menace’ in check,” Ravasz stated.

Prime ministers Fico and Orbán met in Warsaw on April 26 and both told the media that they did not discuss Hungary’s dual citizenship law during their meeting.

“The ideal way would be to resolve the state citizenship issues between the two countries by an international treaty,” Fico stated, as quoted by SITA after the meeting, while noting that citizenship should be an issue for lawyers rather than politicians.

SITA wrote that the prime ministers discussed less controversial issues such as infrastructure, including building bridges across the Ipeľ and Danube rivers, a highway between Košice in Slovakia and Miskolc in Hungary, and a natural gas pipeline between the countries. The political analysts said these projects can have a positive effect on relations between the countries while still adding that citizenship issues and policies toward minorities remain the primary challenges in bilateral relations. “Dual citizenship is ‘the’ challenge”, Ravasz stated, since Slovakia’s current law is unacceptable to Hungary and Hungary’s law is unacceptable to Slovakia.

Good relations between Slovakia and Hungary often rise and fall based on Slovak policies towards its national minorities, primarily ethnic Hungarians living within the country.

“Fico’s policies are driven by opportunism – he understands the current popular yearning for strong, reliable and moderate governance and he thus presents himself as a statesman,” Ravasz told The Slovak Spectator, adding that having a friendly stance towards ethnic Hungarians living in Slovakia serves him well in maintaining this image.

Mesežnikov told The Slovak Spectator that Slovakia needs a comprehensive law on minorities living in the country but noted that pursuing such a law would not be in accord with Fico’s view of “maintaining the status quo”, which the political scientist said has not actually been the case since the cabinet no longer includes a deputy prime minister for national minorities and human rights.

Ravasz noted that the reduced number of Slovak citizens who identified themselves as ethnic Hungarians in the 2011 census is seen in Budapest as a clear signal that assimilation of the Hungarian minority in Slovakia is accelerating.

“Since this is disadvantageous for the Hungarian government, it is very likely to press Fico to widen minority rights in Slovakia,” Ravasz stated, adding that this will probably not be met with much understanding by the Slovak government.

Nevertheless, Mesežnikov said the overall picture of Slovak-Hungarian relations should be better than under the previous government led by Fico, which included cabinet members from the SNS. That party failed to win seats in parliament in the March 10 general election. In the closing days of Fico’s first term as prime minister in 2010 his Smer party as well as other parties played the so-called ‘Hungarian card’ to mobilise voters, according to Mesežnikov.

“This government is one-coloured; Smer has a majority in parliament and I do not believe [it] will have a strong need to play the Hungarian card,” Mesežnikov stated, adding that one scenario in which Fico might choose to “play this card” could be before the next election if Smer’s popularity were to drop and nationalist parties were ascendant. But he concluded that this was not very likely.

According to Mesežnikov, Fico is in a much better position now in regards to Hungary since the prime minister is positively perceived as part of the pro-European mainstream and has promised that Slovakia will pose no obstacles to a common European approach in dealing with economic issues.
Mesežnikov added that Hungary has more challenging economic problems and also has a worse image among other EU countries.

“I don’t think Fico will nourish Slovak-Hungarian controversies but he will rather join the European critics of Viktor Orbán and this will be perceived as a sign of European solidarity,” Mesežnikov stated.