THE GOVERNMENT has found a temporary solution to the problem of how to deliver pay rises granted to health-care workers last year. During a congress of nurses and midwives held in Poprad on April 27, Health Minister Zuzana Zvolenská promised to resolve the current dispute by allocating €50 million from the state reserve. 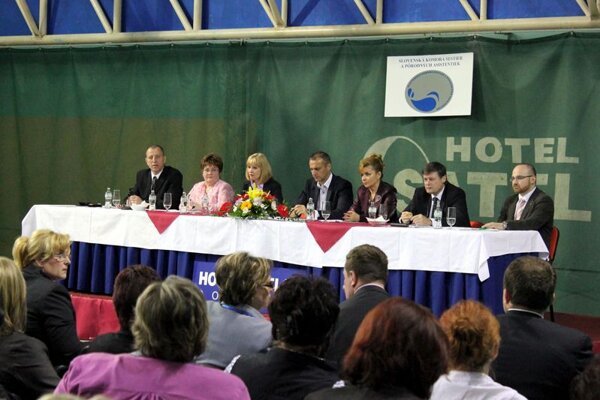 €50 million from the state reserve will be used to raise the pay of medical staff (Source: TASR)
Font size:A-|A+  Comments disabled

THE GOVERNMENT has found a temporary solution to the problem of how to deliver pay rises granted to health-care workers last year. During a congress of nurses and midwives held in Poprad on April 27, Health Minister Zuzana Zvolenská promised to resolve the current dispute by allocating €50 million from the state reserve.

However, the solution will only cover the gap until the end of the year. Moreover, some representatives of the health-care sector say the money will not be enough to cover both the salary increase of nurses and midwives – who were supposed to get more as of April – and the salary increase for doctors, whose pay is to rise from July.

“We have been claiming since November 2011 that the expected funding for the increased salaries will be about €120 million,” Marián Petko, the president of the Slovak Hospital Association told The Slovak Spectator.

Nonetheless, he praised Zvolenská’s efforts to solve the problem.

During the meeting in Poprad, Zvolenská, who was appointed as minister last month, said that the previous government had not allocated enough money to cover the increased salary claims.

“We have set the legislation in such a way as to find funds already in the existing system and redistribute them to have this commitment covered,” said Zvolenská, as quoted by SITA. “The novelty that we bring here today is an agreement on how to use the reserve of €50 million by a non-systemic payment together with the Finance Ministry.”

The allocated money will be distributed to health insurers in the second half of the year. They will then pass it on to hospitals in the form of increased payments for state policyholders, i.e. those, including children, seniors and the unemployed, for whom the state pays health insurance contributions.

Zvolenská has asked the hospitals to cooperate and try to cover the salary increases from their own reserves until they receive the new money from the state. She also called on both health insurers and hospitals not to use the money for other purposes.

“We will demand that an administrative fund is not created from this money; that it is not used for the creation of profit; and that it is mainly redistributed into the system proportionally and justly among all segments,” Zvolenská stated, as quoted by SITA, adding that the money should flow not only to hospitals but also to outpatient units. She stressed that the health care institutions should not use the funds to pay debts or for investments.

Mária Lévyová, president of the Chamber of Nurses and Midwives, told The Slovak Spectator that although the previous government cooperated with the chamber during the preparation of the new law on minimum wages and even promised enough money to cover the increased salaries, after the law came into effect employers claimed that they lacked the funds.

“There was nearly [some kind of] ‘witch-hunt’,” she said, adding that some seemed to believe that it was only the salaries of nurses that were threatening the health-care sector.

Lévyová praised the efforts of Zvolenská, who she said had started to learn about the situation in the health-care sector and attended several negotiations not only with nurses and midwives, but also with other relevant institutions as soon as she was appointed to her post.

“We hope that nurses and midwives will see the results of the efforts of the minister and government on their pay slips soon,” Lévyová said.

Both health-care workers and the Health Ministry admit that higher salaries for sector workers will cost the state about €170 million this year, and up to €175 million next year, since there will be a third phase to the increase in doctors’ salaries, Zuzana Čižmáriková, the ministry spokesperson, told the TASR newswire.

But she added this is not a final sum as it does not include the possible valorisation of salaries or a possible increase in the salaries of other medical staff working in state-run hospitals.

The Health Ministry has already said that it will ensure the funding for higher salaries through different sources which will be established after passing changes to the current health-care system, SITA reported.

The ministry, for example, plans to amend the system by which money is divided between health insurers, basing this on the illness profile of each insurer’s policyholders. Such a change might secure up to €30 million a year for the state-run health insurer, Všeobecná Zdravotná Poisťovňa.

Moreover, the government also plans to increase its payments for policyholders covered by the state.

Lévyová said she believes that additional money can be also found in savings from a new drugs policy, or by restricting privately-owned health insurers from retaining profits.

Petko added that it is also necessary to gradually implement the so-called DRG system, a payment system based on diagnoses, or to develop a system which will set the exact amounts paid for operations, medicaments and specific treatments.

The need to secure the money to increase nurses’, midwives’ and doctors’ pay was also covered in the government’s programme statement. Additionally, the cabinet said it plans to make the whole health-care sector more effective and improve its quality.

When asked about the main challenges for the Health Ministry over the following months, Vladimír Balogh, adviser to the president of the Slovak Medical Chamber (SLK), told The Slovak Spectator that the ministry should focus on the pricing policy across the whole sector in connection with implementation of the DRG system, establish a functioning public health system, and improve health care and set competencies for hospitals in the regions.

Petko said that the ministry has already solved the most urgent problems, finding money to increase salaries and the need to change the allocation of money between health insurers.

“The ministry has to calm the situation since it is very tempestuous and there is a threat of general dissatisfaction with health care,” Petko stated.