Higher taxes on the horizon

HIGHER taxes for high earners and for profitable businesses are now set to mark the epitaph to Slovakia’s 19-percent flat tax regime. They form part of the new government's plan for cutting Slovakia’s budget deficit below 3 percent of GDP in 2013 as required by the European Union. 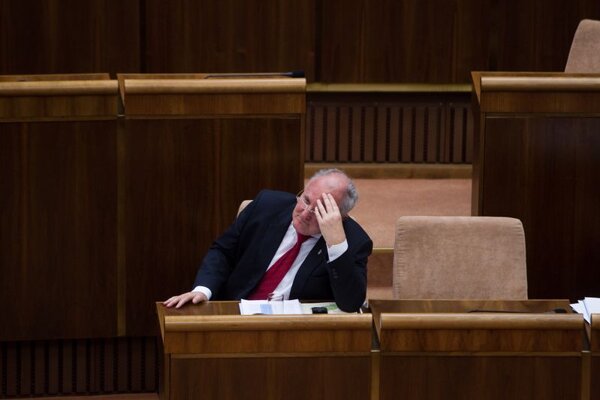 HIGHER taxes for high earners and for profitable businesses are now set to mark the epitaph to Slovakia’s 19-percent flat tax regime. They form part of the new government's plan for cutting Slovakia’s budget deficit below 3 percent of GDP in 2013 as required by the European Union.

“It cannot be the purses of the poor which will bear responsibility for the crisis that was caused by the strong and the rich,” Prime Minister Robert Fico said on May 2, as quoted by the SITA newswire.

The major part of the consolidation of the public finances will happen on the revenue side of the budget according to the government programme, but the cabinet said it would emphasise taxes which would affect low-income groups and economic activity the least, while looking at boosting rates that are currently relatively low compared to other countries.

Raising revenue from property taxes will be considered, taking into account factors such as luxury and environmental impact. Pundits were quick to suggest that raising taxes would have downsides.
“Increasing tax revenues is choosing the easier way of consolidation, while only shifting the consolidation of spending to a later date,” Radovan Ďurana of the Institute of Economic and Social Studies, INESS told The Slovak Spectator.

“One should not forget that it will also be necessary to consolidate more than €1 billion in 2014 and 2015. If the disposable incomes of low-income citizens are not to be cut, then the consolidation will have to happen through the spending side.”

According to Ďurana, such spending cuts and tax rises will prove demanding because on present assumptions they will not allow, for example, the removal of what he called the ineffective premium within the construction saving scheme.

“Hiking tax rates based on a comparison with foreign countries is only [a way of] seeking a justification for higher rates,” Ďurana said. “At the same time, the government should not forget that by decreasing the economic activity of people with higher income and increasing the progressiveness of their taxation damages all groups of citizens in the end.”

Ďurana added that such phenomena could be compared to a situation in which doctors are allowed to treat patients for only seven hours a day and professors to teach for only four hours per week. The progressivity of the personal income tax system is already high, he added, noting that an estimated 15 percent of higher-income employees pay 50 percent of all personal income tax.

The government included among its goals the completion of the ongoing reform of the tax administration through the UNITAS project. Its goal is the unification of the collection of taxes, customs duties, and payroll levies. At the same time, the government wants to focus on combating tax evasion which it says “will provide for additional budgetary resources”.

In the area of energy the government foresees the construction of a new nuclear power plant in Jaslovské Bohunice, while hastening completion of the third and fourth units at the Mochovce nuclear power plant. Nevertheless, Robert Fico also intends to focus on what he calls the “adverse consequences of the non-transparent and wrong privatisation of natural monopolies, so that these have progressively fewer opportunities to abuse their dominant position”. The government will also seek stronger oversight of regulated businesses, SITA reported.

The future of some privatisation projects launched under the previous government remains unclear since the government programme only suggests that “the cabinet will assess the completion of the ongoing privatisation process in its complexity”. Fico told the press after the April 27 meeting of his cabinet that strategic companies would not be privatised but that what he called “redundant assets” might be sold, something that he said did not constitute privatisation. State-controlled forests would not be privatised either, he added.

One of the government’s priorities is to speed up highway construction, while declaring that “the government will ensure balanced tender conditions so that there are no more cases of uncompleted sections and the devastation of whole business chains”. While the government intends to concentrate on using public-private partnership (PPP) projects, it does not specify, for example, which road sections should be built using this method.

Many critics and experts have said that Slovakia’s educational system is in need of serious reform. The government’s programme statement pledged the cabinet to better tune the educational system to the needs of the labour market while focusing more on technical and natural sciences, SITA wrote, adding that the government will also pursue a different school financing approach to ensure that quality rather than the number of students is the decisive factor when distributing state funding.
The document also mentions stopping so-called brain drain from the country and seeking to attract more students and researchers from developing countries to study and work in Slovakia. [The Slovak Spectator will provide more detailed coverage of proposals for the education sector in a future issue.]

The Labour Code and the pension system

In its programme, the government pledges to reintroduce an opt-in system for the second, private pillar of the country’s old-age pension system and says it will assess whether the current number of investment funds is justified. Currently, there are four options within the second pillar: a bond fund, a balanced fund, a stock fund and a new, equity-linked index fund.

Ďurana says that the installation of voluntary entry is an expression of mistrust towards securing pension income through private pension funds.

“It is weakening the impacts of the pension reform without adequate and necessary changes to the first pillar, which is today highly [indebted],” said Ďurana. “The number of funds compared with Sweden, for example, is minimal, and the necessity of mixed funds could be discussed as well.”

Labour Minister Ján Richter has also been tasked with pursuing the introduction of a minimum pension.

Ďurana noted that the idea of a minimum pension is a “good-looking” measure because it can be easily introduced but said that it would significantly reduce the flexibility of the pension system.
Ďurana identified the possible further revision of the Labour Code as another of his concerns.

During its tenure the Fico team will not turn university, teaching or public hospitals into joint-stock companies and thereby, it says, prevent privatisation. But Dušan Zachar of Institute for Economic and Social Reforms, INEKO, told The Slovak Spectator that the current legal status of large state-run hospitals creates extensive room for non-transparent management.

“The stricter management and accounting rules that apply to joint-stock companies would narrow this ‘black hole’,” Zachar stated.

The government also said in its programme that it would adopt measures that are in line with the constitution and European legislation in order to maximise the amount of insurance contributions that eventually go towards diagnosis and treatment of patients.

According to Zachar, the government probably has in mind limits on private health insurers’ freedom to retain profits but the wording in the government’s programme statement is imprecise and provides room for wide interpretation.

“Banning health insurers from [retaining] profits is a counterproductive step,” said Zachar. “To discuss the regulation of the creation and payment of profits in the state-regulated environment of health care and mandatory health insurance, which is considerably concentrated, however, is legitimate.”

Excessive regulation of profits, crossing the optimal line, could have a negative impact in the form of lower motivation to operate and develop services in this market, Zachar added.

As for the tools the government could have included in its programme to start effectively addressing the health sector’s many problems, Zachar listed tough budgetary rules for health-care providers as well as health insurers, and a transparent system of informing patients and insurers about the costs, volume and quality of care provided, via the publication of comparison charts on the internet.

Additional steps, in Zachar’s opinion, could be the reduction of market concentration and state influence on the insurance market, for example through the break-up of Všeobecná Zdravotná Poisťovňa, the state-owned health insurer, and completion of the transformation of state hospitals into joint-stock companies, allowing for the possibility of eventual private investment. If the managers of state hospitals and other health-care institutions were to be picked using transparent selection processes, this would also benefit the sector, Zachar said.