UKRAINE’S decision to postpone a summit of central and eastern European presidents that was to have taken place in the Black Sea port of Yalta on May 11-12 has now presented Slovak President Ivan Gašparovič with a rare spot in the diplomatic limelight. The event was put off after a series of European leaders – though not Gašparovič – said they would not attend, most citing Ukraine’s treatment of jailed opposition leader Yulia Tymoshenko. 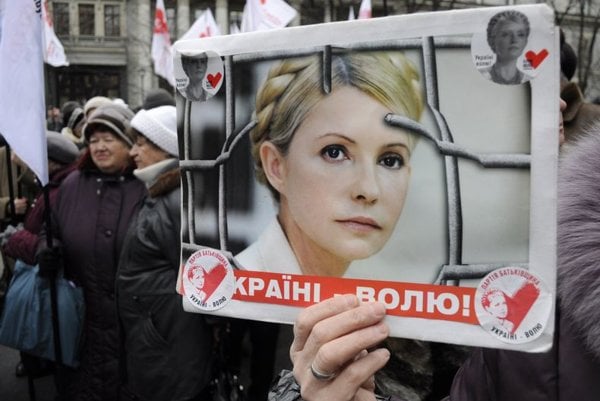 UKRAINE’S decision to postpone a summit of central and eastern European presidents that was to have taken place in the Black Sea port of Yalta on May 11-12 has now presented Slovak President Ivan Gašparovič with a rare spot in the diplomatic limelight. The event was put off after a series of European leaders – though not Gašparovič – said they would not attend, most citing Ukraine’s treatment of jailed opposition leader Yulia Tymoshenko.

Gašparovič, together with his Polish counterpart Bronislaw Komorowski, has now ended up as an interlocutor with the Ukrainian government in what appears to be a growing diplomatic rift between Europe and Ukraine.

Tymoshenko, one of the leaders of Ukraine’s 2004 Orange Revolution and now a leader of the country’s opposition, was jailed for seven years in 2011 after a Ukrainian court found her guilty of abuse of power for signing an agreement on gas deliveries from Russia while serving as prime minister between 2007 and 2010. Her imprisonment has prompted criticism from several European leaders. Tymoshenko herself claims that her imprisonment is part of a campaign of persecution by her rival Yanukovych, who defeated her in the 2010 presidential elections.

Tymoshenko’s imprisonment was also the main reason given by several European leaders who say they will not attend matches by their national football teams during the upcoming Euro 2012 football championship, which is being staged jointly by Ukraine and Poland.

“None of our government will personally come to watch the football matches in Ukraine,” said Austrian Foreign Minister Michael Spindelegger, as quoted by the SITA newswire, adding that it is “their expression of solidarity”.

Ukraine has decried such tactics.

“We cannot believe that German representatives consider imposing the methods from the Cold War again and that they will try to make sport a hostage to politics,” said Ukrainian Foreign Ministry spokesperson Oleh Voloshyn, as quoted by the TASR newswire, after German Chancellor Angela Merkel confirmed that her ministers would not go to see matches held in Ukraine, only those in Poland.

Polish President Bronislaw Komorowski said he was concerned that a boycott could restrict the European ambitions of Ukraine and push it back into the arms of Russia.

“A football championship is not the property of this or that politician,” said Komorowski, as quoted by TASR. “It is a chance for a state, for Ukraine, to present its best side.”

Alexander Duleba from the Slovak Foreign Policy Association (SFPA) told The Slovak Spectator that though Tymoshenko deserves a fair trial and the necessary medical treatment, he is convinced that “the EU needs to have a dialogue with Ukraine” and that the boycott itself will not bring the results that European leaders seek.

The first to cancel his attendance at the Yalta summit was German President Joachim Gauck. He was later followed by several of his counterparts. Fourteen presidents eventually pulled out; the exceptions were Slovakia’s Ivan Gašparovič, Poland’s Bronislaw Komorowski and Lithuania’s Dalia Grybauskaite. But not all of the pull-outs stated openly that the Tymoshenko case was the reason for their absence.

Attendance at the summit was also one of the issues discussed during a V4 meeting at which Gašparovič confirmed his plans to take part in the summit unless it was cancelled. He said that Slovakia, as Ukraine’s neighbour, cannot avoid an open dialogue with the country, TASR reported.
“In addition, we need to communicate about issues that have sprung up concerning Ukraine’s internal political developments,” stated Gašparovič, as quoted by TASR. “I believe that such a debate can yield benefits to us, the European Union as well as for Kiev.”

Duleba considered Gašparovič’s attitude as positive and told The Slovak Spectator that Slovakia needs to have what he calls “a systematic policy” towards Ukraine.

“The Slovak Republic is in a different situation than, for example, Estonia or the Czech Republic, which do not neighbour this country [i.e. Ukraine],” Duleba said.

Though Duleba said it is necessary to talk about the errors made in the process, he stressed that European leaders “should not deal with the substance of the verdict passed by the Ukrainian court”.

Ukraine vs. the EU

When asked about the consequences of a boycott of the football championships and the absence of European leaders at the summit in Yalta on relations between Ukraine and the EU, Duleba said that the impact would be negative since there was a political misunderstanding between the countries.

Duleba recalled the fact that Ukraine is the first among the EU’s eastern European neighbours to succeed in preparing an association agreement which creates a framework for cooperation between the EU and the non-EU country. However, ratification of the agreement has been halted until the country addresses Tymoshenko’s case and ensures her fair treatment.

Duleba says it is unlikely that all EU countries will unite to persuade Ukraine to change its attitude since Poland, for example, has already said that it will not join such a coalition.

On the other hand, Jozef Bátora, an associate professor and director of the Institute of European Studies and International Relations of the Faculty of Economic and Social Sciences of Comenius University in Bratislava, says that a common attitude and pressure by the EU towards Ukraine has been present for some time, either in the form of declarations passed in Brussels, or in the form of statements made by the EU’s ambassador to Ukraine.

He told The Slovak Spectator that Slovakia has “an imminent interest in a change to the current erosion of the democratic establishment in Ukraine” and that it “is necessary to use the whole range of tools from the coordination of common attitudes within the EU through to cooperation with neighbouring states in our region, to its own activities focused on the support of the development of civil society and the rule of law”.

“The boycott is only a symbolic reaction to the erosion of democracy in Ukraine,” Bátora said, adding that it is the Ukrainian government which is threatening the country’s relations with the EU.
“If the current undemocratic tendencies continue, relations between the union and Ukraine will continue to worsen, regardless of the boycott,” he commented to The Slovak Spectator.