BARBIZON is a small town near Paris which attracted and inspired many noteworthy painters in the 19th century. The exhibition Nebo nad hlavou - Umelci Barbizonu (Under the Open Sky - The Barbizon Painters) brings many of their works of art to Slovakia for the first time. They are currently being exhibited at Bratislava’s City Gallery (GMB) in the Mirbach Palace. 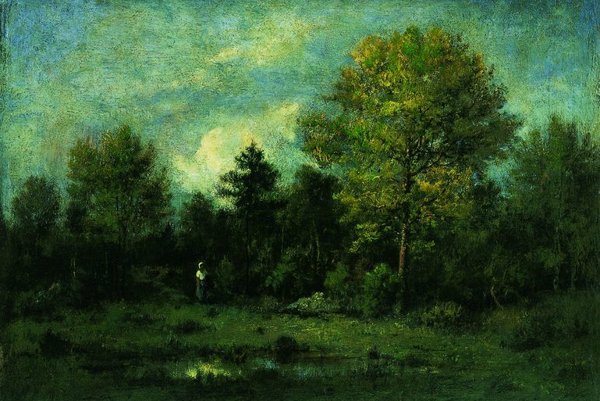 BARBIZON is a small town near Paris which attracted and inspired many noteworthy painters in the 19th century. The exhibition Nebo nad hlavou - Umelci Barbizonu (Under the Open Sky - The Barbizon Painters) brings many of their works of art to Slovakia for the first time. They are currently being exhibited at Bratislava’s City Gallery (GMB) in the Mirbach Palace.

The GMB news release states boldly that “European art history of the 19th and 20th centuries would be unthinkable without the Barbizon painters”. According to the release, the Barbizon artists created a new style of landscape painting that reflected the individual impressions of the artists without veering totally into realism.

The exhibition of 54 paintings was lent to the GMB by the Liberec Regional Art Gallery in the Czech Republic. According to Jan Randáček of the gallery, this is the largest collection of French landscape paintings ever sent to another gallery. It comprises works of renowned artists such as Eugén Boudin, Paul Vernon, Théodore Rousseau, Narcisso Virgilio Diaz de la Peňa and was assembled from the private collection of Baron Heinrich von Liebieg, an influential nobleman and entrepreneur, who eventually bequeathed them to the town of Liberec.

Zuzana Štěpanovičová of the Regional Art Gallery in Liberec and the GMB's Zsófia Kiss-Szemán are co-curators of the exhibition. Kiss-Szemán dates the artworks to the middle and second half of the 19th century, telling The Slovak Spectator that for these artists, the decision to leave Paris and move to rural Barbizon was an issue more of lifestyle than artistic inspiration. Many of the painters stayed from time to time at an inn that offered more than mere shelter. In bad weather, the artists painted the inn’s interior walls in a kind of early graffiti. Later, the painters also pressed local authorities to make the nearby woods at Fontainebleau a nature preserve, thus becoming early environmental advocates.

Štěpanovičová told a press conference that the Barbizon artists quickly received acclaim from the art centres in Vienna and Budapest. The collection also includes later landscapes by Czech, German and Austrian painters who were inspired by the Barbizon artists and their style, which has been labelled mood-impressionism.

Štěpanovičová explained that the Barbizon artists shifted the then-fashionable Romantic Movement to a new genre that emphasised “plain and ordinary” themes and the elements of light as well as nature’s changing seasons. These same elements were later markedly (and famously) developed further in impressionism.

Ladislav Mednyánszky, a native of Beckov, is the best-known Slovak artist inspired by the Barbizon group and visited Barbizon and later lived and painted in Paris and Vienna. Twenty-five of his paintings in the Barbizon style are included in the current GMB exhibition. Mednyánszky’s paintings come from the Slovak National Gallery, the GMB and private collections. Many are landscapes of the French coast or countryside. Though Mednyánszky developed his style later than the original Barbizon artists, he added his own contribution to what has become known as the Barbizon style.

Guillaume Robert, the cultural attaché of the French Embassy in Bratislava, said that even though the Barbizon artists might exist somewhat in the shadow of the later, better known, impressionists, they nonetheless exerted a great influence on the more famous group. He added that he thought the exhibition – supported by the French Embassy – well-balanced the emphasis usually given to more contemporary artists and their works.

The Barbizon artists definitely broke new ground, Kiss-Szemán said, adding that “these artists were among the first to abandon studios and go into nature and faithfully depict the play of light and shadow in nature”.

The exhibition can be viewed in the Mirbach Palace in Františkánske Square until June 17 except for Mondays. More information can be found at www.gmb.sk/en.