IN THIS nice postcard from 1906 we see the end of Malá Studená dolina (Small Cold Valley) and, behind the posing hiker, one of the five Spiš mountain lakes (Spišské plesá) as well as the roof of the Téry cabin in the lower left corner. 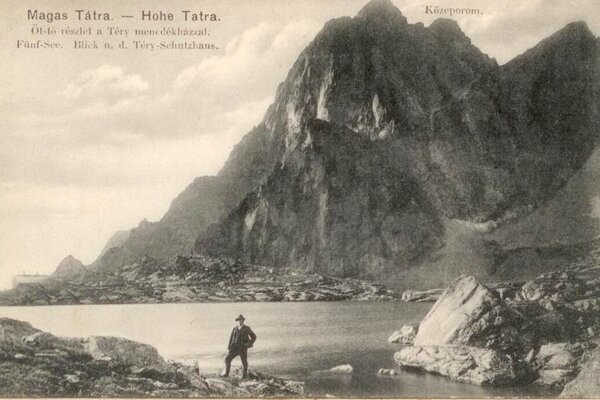 IN THIS nice postcard from 1906 we see the end of Malá Studená dolina (Small Cold Valley) and, behind the posing hiker, one of the five Spiš mountain lakes (Spišské plesá) as well as the roof of the Téry cabin in the lower left corner.

There are about 160 lakes of glacial origin in the High Tatras and they have been called “pleso”, or mountain eye, from the earliest times. It is interesting to note that the lakes were also called “sea eyes” as there was a widespread belief that the lake water originated in the Baltic Sea, travelling through various underground rifts to the mountains of Slovakia.

Several documents show that it was not just common people who believed the theory. In 1751, a scientific expedition visited the Tatra lakes and waited two days near Pribylinské pleso to see if high and low sea tides were manifested in the water of the pleso.

Residents of some villages at the foot of the Tatras helped to spread this theory in an effort to make money, claiming to foreign researchers that one could see the surface of wonderful lakes at enormous depths through clefts in the peaks. Another widespread rumour was that remains of shipwrecked boats from the Baltic Sea were found in the lakes.

Professor Juraj Bohuš from Kežmarok wrote in one of his studies that he had found pieces of wood floating on various lakes that were decorated with the Swedish Kingdom’s coat of arms. Enterprising Gorals, a distinct ethnic group living in the Tatras, even took pieces of old wood to King Stanislaw August of Poland and presented them as remains from a wrecked ship. They were well-rewarded by the king and the old flotsam ended up in the scientific collections of Warsaw Castle.

Two mountain climbers, Schwarz and Téry, ascended its peak on August 11, 1876. The first climb to the peak in snow was on April 2, 1904 and the members of the expedition were Karol Jordán, J. Lackner and József Szelke. Jordán was subsequently one of the most important personalities in developing mountaineering in the High Tatras.