AFTER a two-week marathon debate, with comments by 60 members of parliament on the programme statement that the government of Prime Minister Robert Fico will pursue over the next four years, parliament easily adopted the document on May 15 with 82 yes votes among the 145 MPs present. Fico’s Smer party holds a comfortable majority of 17 seats in parliament so it was expected that the programme would have no trouble passing. But it took much longer than expected because of the large number of MPs, mostly from opposition parties, who wanted to comment on the direction proposed by the new government. 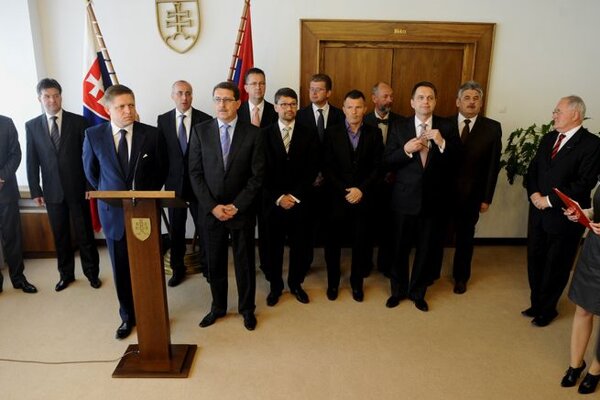 AFTER a two-week marathon debate, with comments by 60 members of parliament on the programme statement that the government of Prime Minister Robert Fico will pursue over the next four years, parliament easily adopted the document on May 15 with 82 yes votes among the 145 MPs present. Fico’s Smer party holds a comfortable majority of 17 seats in parliament so it was expected that the programme would have no trouble passing. But it took much longer than expected because of the large number of MPs, mostly from opposition parties, who wanted to comment on the direction proposed by the new government.

“I want to assure all people in Slovakia that this is a programme of stability, social dialogue, and protection of people who can only barely protect themselves from the impacts of the [economic] crisis,” Fico stated shortly after parliament approved the programme, as quoted by the SITA newswire.

Overall, MPs from the opposition criticised the programme for what they called a “too general” approach and for giving people unachievable illusions.

Smer MPs were unified in their vote of confidence for the government programme, apart from two deputies who failed to vote in favour. Smer MP Viliam Holeva said that his vote against the government programme was caused by a malfunction in his voting device that prevented him from pushing the ‘yes’ button. Meanwhile, Mária Ritomská of the opposition Ordinary People and Independent Personalities (OĽaNO) party told the media that she was against the government’s programme but that the voting system had registered a ‘yes’ vote from her.

Fico termed the two votes that were missing from his party caucus a “greenhorn tax”, adding that this is why it is important that Smer has a comfortable majority in parliament, the SITA newswire reported.

What came as a surprise during the vote was the fact that eight deputies from OĽaNO, which holds 16 seats in parliament, abstained from voting. Igor Matovič, OĽaNO’s chairman, who opened his party’s candidate list before the election to individuals from any or no political party, said that his party’s parliamentary caucus was unified because each member had voted in accordance with his or her conscience.

“We voted as we had suggested, which is that we would not look at the proposals as red or blue [left or right] but based on whether something is good or bad,” Matovič stated, as quoted by SITA, adding that this is why some deputies from his party abstained rather than voting against the government’s programme.

Matovič also stated that he has no reason not to believe Ritomská’s statement about her apparently incorrectly recorded vote.

Political scientist Ján Baránek told SITA that OĽaNO has not brought much new to Slovakia’s political culture in the manner in which its MPs voted, but has instead demonstrated its “limitless freedom” and thereby shown that the party is “useless as a coalition partner”. But Baránek noted that the five opposition parties are not bound by any specific agreements.

The programme offered by Smer is organised around 10 priorities, with the government stating that the top priority will be to ease the impacts of the European economic crisis and strengthen economic security for Slovak citizens, followed by the commitment to reduce the country’s public finance deficit to 3 percent of GDP or less in 2013, and to support economic growth and price stability.

The government also aims to reduce the high level of unemployment among young people and seek solutions to deal with the large proportion of the population who have been unemployed for a year or more. The programme statement also speaks about improving the enforceability of the law in Slovakia and systematically eliminating corruption at all levels of society.

The government wants to consolidate the economic condition of the public health-care system, with an emphasis on the sector’s financial stabilisation. It mentions supporting and lobbying for Slovakia’s interests within Europe and better use of EU funds.

Strengthening economic and social cohesion in society is one of the 10 priorities, as is a planned effort to improve quality of life through economic growth and scientific and technological development. The last priority area is to make government open to all segments of society by developing specific proposals through a Council of Solidarity and Development that will consist of representatives of the government’s social partners and other civic organisations.

Radoslav Procházka from the opposition Christian Democratic Movement (KDH) commented during the parliamentary debate that the government is “deepening the illusion that bodies of government can control things such as economic growth and that the socially-oriented state is within reach,”
further adding that the government programme should “not [be] a cartoon with super-heroes”.

Procházka said he had at least expected the government to demonstrate that “it knows what dark clouds have been gathering above our heads” adding that the government cannot secure the economic growth it promises “because no government can do it. Not even one led by Chuck Norris”.