AFTER a weeks-long tug-of-war the centre-right opposition parties in parliament have finally agreed on the distribution of nominations to senior public positions granted to them by the new Fico government. The Christian Democratic Movement (KDH) will nominate the new head of the Public Procurement Office (ÚVO), while Freedom and Solidarity (SaS) will pick the director of the Supreme Audit Office (NKÚ). Banking sector expert Ján Tóth should become the deputy governor of the central bank, the NBS, while Ľudovít Ódor will become a member of the Fiscal Council; both were proposed as experts by the Slovak Democratic and Christian Union (SDKÚ). 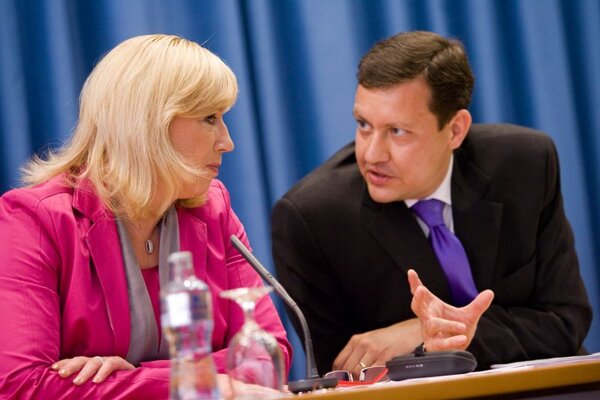 AFTER a weeks-long tug-of-war the centre-right opposition parties in parliament have finally agreed on the distribution of nominations to senior public positions granted to them by the new Fico government. The Christian Democratic Movement (KDH) will nominate the new head of the Public Procurement Office (ÚVO), while Freedom and Solidarity (SaS) will pick the director of the Supreme Audit Office (NKÚ). Banking sector expert Ján Tóth should become the deputy governor of the central bank, the NBS, while Ľudovít Ódor will become a member of the Fiscal Council; both were proposed as experts by the Slovak Democratic and Christian Union (SDKÚ).

Most-Híd will nominate the chairman of the supervisory board of the national privatisation agency, the National Property Fund (FNM); Most-Híd and the SDKÚ will propose candidates to the board of directors of the National Land Fund; and SaS will pick a member of the Radio and Television of Slovakia (RTVS) Council, the SITA newswire reported. One of the five opposition parties, Ordinary People and Independent Personalities (OĽaNO) chose not to claim any posts.

According to Prime Minister Robert Fico, agreement over who would fill the top post at the ÚVO came only on May 16, after he had warned that unless the opposition parties managed to agree on someone he would withdraw his offer to let them choose and simply install one of the candidates who had emerged during a selection process announced under his predecessor. Fico welcomed the opposition’s action to line up candidates for the other posts granted to them.

However, agreeing on the nominations was only a small part of the many challenges currently facing the centre-right parties.

If parliamentary elections were held now, the SDKÚ would be left outside parliament according to a recent poll conducted by the Polis agency for TV news channel TA3. It found that only 4.8 percent of respondents would vote for SDKÚ, the party that has has provided two of Slovakia’s last three prime ministers since 1998. The party will elect a new leader at its congress on May 19.

SDKÚ delegates will elect their new party chair from among three candidates: former justice minister Lucia Žitňanská; Pavol Frešo, the president of the Bratislava Self-Governing Region; and MP Viliam Novotný, who has the backing of the party’s Košice branch.

Iveta Radičová, the former prime minister and one of the most popular personalities in the SDKÚ, resigned from the party two weeks before the opening of the congress which will choose the new leadership team. She has not endorsed any of the candidates.

At a meeting with Daniel Lipšic, the former interior minister and deputy chairman of the KDH, Radičová acknowledged that the Slovak right is in a serious situation. Both agreed that Slovakia’s disenchanted centre-right voters need a new vision. However, their comments were somewhat overshadowed by media speculation about the possibility of Lipšic establishing a new right-wing party – or trying to set off a massive change within KDH.

The Sme daily reported on May 5 that if Lipšic does establish a political party then Radičová will definitely not be a member and that she had confirmed this to him. Lipšic responded that he had not offered a place in any new party to Radičová, but that he had indeed talked to her about what “vision” to offer frustrated and disenchanted centre-right voters. He added that he is working on a vision and is aiming to go public with it in late May. According to Lipšic, who claimed that the daily had somewhat misinterpreted the facts, Radičová was working on a “concept” of her own.

For her part, Radičová unequivocally ruled out any further participation in party politics.

Meanwhile, KDH chairman Ján Figeľ said that a clear stand from Lipšic about a possible leadership bid would be of benefit to both the party and the public. Lipšic in early May said that right-wing voters were disgusted and that “centre-right parties lack the vision that would capture [them]. The defence of reforms from 10 years ago, when the right wing had a vision, [looks] weak. The world and Slovakia has changed. We need a vision for the country, for the disappointed people and the voters, but we evidently do not have one.”

Lipšic promised more information by the end of May, but refused to say whether his possible bid for the KDH leadership at the party’s congress, due in June, is also at stake.

Juraj Marušiak of the Institute of Political Sciences at the Slovak Academy of Sciences (SAV) suggested that the KDH did not achieve its leading position on the right thanks to its own efforts, but instead owes its relative success to the decline of the SDKÚ.

“Thus speculation about establishing a new right-wing party, which would collect those dissatisfied with other right-wing parties and bring new faces into politics, might seem attractive,” said Marušiak.

Observers suggest that Lipšic is currently trying to capitalise on a surge in his own personal popularity, which occurred during the raging pre-election debate over the Gorilla file, an unverified document based on the alleged bugging of an apartment by the Slovak intelligence service that purportedly describes high-level political corruption in 2005-6 during the second government of Mikuláš Dzurinda, the outgoing SDKÚ leader.

“Lipšic is currently the most popular face of the party,” Marušiak told The Slovak Spectator, adding that the election preferences of the KDH are not improving and the party does not have much chance of expanding its voter base as long as it is unable to get rid of what he called “old faces, which compromise the party in the eyes of the voters”.

Political scientist Grigorij Mesežnikov, president of the Institute for Public Affairs (IVO), a think tank, said that speculation about a possible new right-wing party is part of Lipšic’ way of stating that the current situation within the right wing is not ideal and that he is trying to develop some initiatives. He noted that the KDH itself is quite critical of its own position and the result it achieved in the March parliamentary elections.

“However, I would like to note that since 1994, when the KDH collected 10 percent, and except for 1998, when it run as part of the SDK coalition, the KDH has always had 8 percent, no matter who was there,” Mesežnikov said, adding that ringing the alarm about the party not achieving a good election result is inappropriate because the “party is stable”.

What Mesežnikov reads from the 8-plus-or-minus percent of the KDH is that obviously the politics pursued by this party has its limits and this is the issue “that Lipšic and the KDH should address, instead of planting hopes that by some radical change a miracle can be achieved.”

“Thus Lipšic can move only in a limited space in terms of the voters’ support for the KDH,” said Mesežnikov, adding that he does not rule out the possibility that he will leave in the end and try to address voters through a new political party.