SLOVAKIA suffers from one of the highest youth unemployment rates in the European Union. In order to address the problem, the cabinet of Prime Minister Robert Fico has responded to an initiative launched by EC President José Manuel Barroso and proposed to re-allocate EU structural funds away from programmes such as IT and education and towards tackling youth unemployment and boosting economic growth. The plan has attracted criticism from the opposition, which is calling for a more systematic solution. 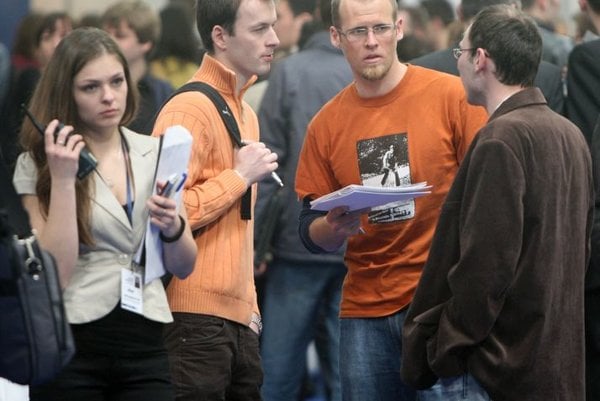 SLOVAKIA suffers from one of the highest youth unemployment rates in the European Union. In order to address the problem, the cabinet of Prime Minister Robert Fico has responded to an initiative launched by EC President José Manuel Barroso and proposed to re-allocate EU structural funds away from programmes such as IT and education and towards tackling youth unemployment and boosting economic growth. The plan has attracted criticism from the opposition, which is calling for a more systematic solution.

On May 16 the cabinet agreed to re-allocate €295 million from EU operational programmes (OPs) which it believes might otherwise go unspent. The transfer will need approval from the EC. The government said that the Ministry of Labour, Social Affairs and Family would get another €50 million in addition to the re-allocated funds, although the source of the extra funds was not immediately clear.

“Initially we intended to re-allocate €270 million, however after extensive discussions with ministers we agreed that this would be a good opportunity to use EU funds to create new jobs and support the economic growth,” said Fico, as quoted by the TASR newswire. “I believe that we will receive the EC’s approval soon and be able to use the €345 million in the autumn,” Fico added.
Of the €295-million in re-allocated EU funds, the largest sum, €170 million, will come from OP Informatisation of Society (OPIS), then €70 million from OP Education and €55 million from OP Transport.

The re-allocated funds will be used within two other OPs: Employment and Social Inclusion, and Competitiveness and Economic Growth.

The cabinet plans to create a total of 13,000 jobs within the first programme by paying €70 million to companies as direct subsidies. In the second programme a total of €225 million will be spent on technology and innovation, i.e. by purchasing machinery and technology. The number of jobs which should be created under the second programme has not yet been calculated, the Sme daily wrote.
To ensure that the money is used to actually create new jobs, the cabinet will approve all tenders related to the aforementioned programmes.

The cabinet plans to send its plans to the European Commission by May 20 and expects a fast response in order to allow the money to be available as early as autumn.

The Barroso initiative that prompted this action called on governments in EU member states with the highest levels of youth unemployment, including Slovakia, to make stronger efforts to boost economic growth and tackle youth unemployment.

The EU's Commissioner for Regional Policy, Johannes Hahn, in a meeting on May 3 with Transport Minister Ján Počiatek in Bratislava, supported the idea of transferring structural funds to this end. However, the commissioner underlined that he would need to see details of the proposals, which had not then been finalised.

Christina Wells, from Hahn’s department, told The Slovak Spectator that the Slovak authorities would need to submit their proposals for revising the relevant structural fund programmes to the EC. These proposals must be properly justified, including the expected results of the transfers, for example in terms of new jobs created, along with sound reasoning on the sources of the transfers, which should be those parts of existing programmes where implementation has been slowest.

The proposals would have to be approved by the monitoring committees for the programmes, which include the relevant stakeholders and economic and social partners, before being formally submitted to the EC for a decision.

The opposition Slovak Democratic and Christian Union (SDKÚ) has criticised the cabinet’s plans and is calling for a more systematic solution. It claims that under the current proposals only a small portion of unemployed young people will get jobs, and only for a short period of time.

According to SDKÚ MP Miroslav Beblavý, the Fico cabinet wants, under the pretext of better youth employment, to hand money to businesspeople. Even though the cabinet reworked the re-allocation plan slightly, Beblavý believes this has not solved any of the problems and has even worsened some of them. In particular, he is critical of the way the money is supposed to be divided: 24 percent on increasing youth employment; the rest to businesses for various purposes, sme.sk, the website of the Sme daily wrote.

Labour Minister Ján Richter conceded that his ministry intended to give money directly to companies and that this is not a systematic solution, but said it was necessary “in order that the funds are spent and used for the employment of young people,” Sme wrote.

“Youth unemployment in Slovakia is primarily due to a skills mismatch in the labour market,” Kahanec told The Slovak Spectator. “Schools and universities produce large numbers of graduates with skills that are little in demand. On the other hand, graduates with technical skills are scarce.”

According to Kahanec, Slovakia’s education system produces graduates with encyclopaedic knowledge but almost no ability to apply it, few practical skills, and limited potential for innovation.
“Even for those graduates that find jobs, employers have to invest a lot into bridging such skill gaps before these employees can become sufficiently productive,” said Kahanec.

The official youth unemployment rate in Slovakia, which stood at 33.2 percent in 2011, is among the worst in the EU, with only Lithuania, Greece and Spain recording higher rates, Kahanec noted.

He added: “Slovakia exhibits some of the highest [school] enrolment rates in Europe, but one should look at unemployment ratios, i.e. the share of unemployed in the total youth population. By this measure, Slovakia’s position of 10 percent looks somewhat better, with eight EU member states reporting a worse situation, including Spain and Latvia, but also Sweden and the UK. Nevertheless, youth unemployment is a serious challenge for policymakers.”

With respect to the re-allocation of EU funds Kahanec believes that more money could certainly help to implement training and apprenticeship programmes, thereby reducing the skills gaps.

“A much more effective and efficient long-run strategy, however, would be to reform our education system to better cater to labour market demand,” he said.

Kahanec warns of problems that may arise when fulfilling the plans and notes that often in the past the consequences of miscalculations in labour market policies have been ignored. A typical example he cited is subsidised public works for unemployed persons, stating that such programmes are expensive, participants tend to reduce their efforts to find permanent jobs, and the benefits of their work experience tend to be very limited, given the low skill-level of such employment. He added that these also programmes often crowd out private employment as the newly employed workers displace other workers.

Another problem, according to Kahanec, is that certain groups of the unemployed may be ignored, such as those living in socially-excluded communities. On the other hand, additional funds available for labour market policy may enable policymakers to address the complex problems of the most severely excluded communities.

“For this to happen policy approaches would need to be oriented towards long-term rather than short-term gain,” said Kahanec.

He stated that an efficient and effective education system well-aligned with labour market demand is the most essential long-term strategy and that the key short-term goal is bridging the skills gap.