MORE cooperation between businesses and the education system could help improve the quality of education and the skills of those who graduate from Slovak schools, benefitting both parties. Businesses are once again bringing this concept to the forefront as the new government gears up. Education Minister Dušan Čaplovič seems to have a sympathetic ear for the idea but at this point there are only pledges rather than specific legislative action plans. 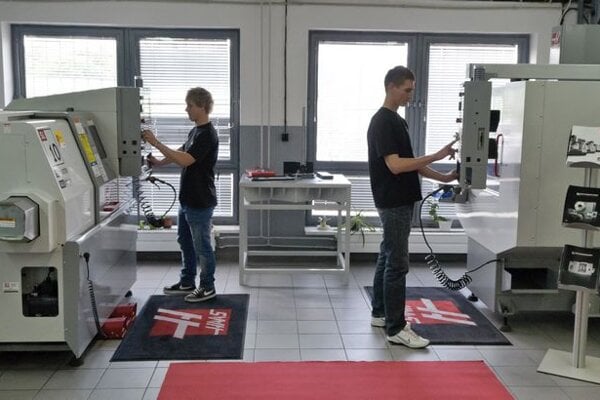 MORE cooperation between businesses and the education system could help improve the quality of education and the skills of those who graduate from Slovak schools, benefitting both parties.
Businesses are once again bringing this concept to the forefront as the new government gears up.
Education Minister Dušan Čaplovič seems to have a sympathetic ear for the idea but at this point there are only pledges rather than specific legislative action plans.

The government’s programme document's section dealing with education, as adopted by parliament, states that supporting activities within the business sphere is a priority and it promises to prepare legislative approaches that will encourage schools of all types to take the needs of the labour market into consideration when developing their curricula.

What might seem novel in the government’s programme statement, however, is already being implemented by several foreign investors in Slovakia, according to the German-Slovak Chamber of Commerce, as some businesses currently cooperate with schools in their area by providing machinery and equipment or offering practical training in their own workplaces.

“Some companies even completely train on their own, for instance in professions in which they can hardly find any skilled workers in the labour market, such as for highly-specialised industrial operations,” Markus Halt, the chamber’s spokesperson, told The Slovak Spectator, adding that he thinks more foreign investors would participate in such efforts if there was more support from the state government.

The government programme statement pledges to develop private support by “taking steps to motivate the private sector to financially participate in education, particularly in professional training and preparation”.

“If industry wants to raise its productivity further on – and this is essential for future growth – it needs skilled employees,” Halt stated. “Supporting education is therefore an investment in future profits.”

German investors with operations in Slovakia are eager to invest in that way, Halt said, while noting that “it is also important that the main financial contribution keeps on coming from the state”.

Halt told The Slovak Spectator that the German-Slovak Chamber of Commerce will bring its members together at a workshop on vocational training to talk about the government’s approach in its programme statement.

The American Chamber of Commerce in Slovakia (AmCham) told The Slovak Spectator that American investors in Slovakia are also interested in improving the Slovak education system, particularly at the university level.

“We support the involvement of external partners in the process of managing and teaching at the universities,” Jake Slegers, the executive director of AmCham, stated. “Similar to the already existing principle in the Vocational Education Act, we suggest that the state should motivate companies to take part in the university education system by recognising the associated costs as being tax deductible.”

Slegers noted that AmCham members are active with special courses, for instance at the Center for North American Studies at the University of Economics in Bratislava, where business leaders present lectures about practical business issues and the challenges that businesses face. He added that a special section of the AmCham website features internships that are available at its member companies.

Lucia Kleštincová, a member of AmCham’s 2012 Year of Education initiative, told The Slovak Spectator that Slovakia will need to provide financial incentives for businesses to support schools, while noting that private financial support is a legitimate and well-appreciated source of funding for world-class universities.

Education Minister Čaplovič has stated he wants to continue the reforms of university education that were initiated by his predecessor, Eugen Jurzyca, under the government of Iveta Radičová.

There are several difficult questions to be considered as the government develops its reform proposals for education, Slegers said, such as whether there are enough quality teachers, what skills and knowledge a graduate of a high school or university should have, whether to give more support for research-oriented universities, and how to better support business-academia cooperation.

AmCham’s 2012 Year of Education initiative states that “a high quality educational system cannot be achieved through promoting quantity but only via setting up a quality strategy of modern education linked to the needs of the industrial and business spheres while providing substantial financial incentives”.

The failure of Slovak universities, as well as lower-level schools, to develop practical skills in their students was stressed by Halt, who suggested that additional internships should be incorporated into university courses as is done in other countries.

“In Slovakia by contrast, internships are an exception rather than the rule,” Halt stated. “Instead, students tend to do side jobs which often have nothing to do with their studies.”

Čaplovič has repeatedly stated since his appointment that the education system should focus more on mathematics, science and technical skills. He intends to make mathematics a compulsory part of school-leaving exams at secondary schools, wants to limit the number of students studying at grammar schools and gymnasiums, and will instead seek to motivate students to pursue studies in technical specialisations.

Some education experts have criticised the cabinet for focusing too much on the desires of businesses for a better match between education and Slovakia’s labour market. The Slovak Governance Institute (SGI), an NGO, wrote in its comments on the government’s programme that more flexible and broad education is required, not only education that prepares a graduate for a job with a specific company which it wrote “might change its production or leave Slovakia before a particular student even leaves the university”.

Business representatives are commenting positively about the statements of the education minister, reiterating their position that the Slovak labour market desperately needs graduates from technical professions.

“The value of a technically-orientated education does not get the appreciation it deserves [in Slovakia],” Halt stated, while explaining that entering vocational training for technical professions is a highly regarded form of education in German-speaking countries and that many companies in Slovakia are having trouble finding enough skilled workers as well as hiring qualified supervisors.

“So we need an upgrading of science and mathematics in schools, which in the end motivates more students to commit themselves to these subjects and makes it a major part of their education,” Halt told The Slovak Spectator.

Slegers of AmCham agreed with the direction proposed by the education minister while noting that even though humanities are important the education system needs a better balance in fields of study.

“Now, we [Slovakia] need to increase the percentage of graduates from technological schools and universities as these are exactly the fields businesses here are striving for,” Slegers stated, noting that only 14.5 percent of all university graduates have a degree in technical and scientific fields. “This is a disturbing trend in economic and technological development and it can cause the same kind of problem in Slovak society that it has already caused all around Europe – a lack of technically-skilled graduates.”

AmCham’s education document suggests that the ministry, in cooperation with employers, should develop laboratories, workshops, and programmes at primary schools that combine play with learning that could increase students’ interest in their future employment as well as better partnerships between businesses and high schools and universities.