WHEN the Reduta, home of the Slovak Philharmonic (SF), reopened in January 2012 after a major reconstruction, the SF revealed that its new pipe organ was not yet ready. Now the organ is set to fill the hall with music after making its debut on May 20. 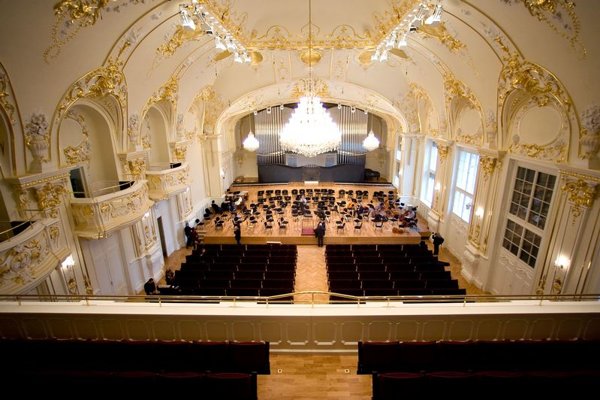 WHEN the Reduta, home of the Slovak Philharmonic (SF), reopened in January 2012 after a major reconstruction, the SF revealed that its new pipe organ was not yet ready. Now the organ is set to fill the hall with music after making its debut on May 20.

When it was determined in 2009 that the old organ was outdated and inadequate for the reconstructed concert hall, the Rieger-Orgelbau company was selected to construct a completely new instrument.
The organ has 66 registers and 3 manuals, making it one of the largest pipe organs in the country. Its construction was based on traditional organ-making techniques and its electronic memory enables 66,500 possible musical combinations.

The reconstructed Reduta has space not only for concerts but also for literary events, small theatre performances and poetry readings. The renovation of the building was co-financed by Norway and EEA Grants at a cost of nearly €2 million. The recently-opened courtyard was named after Norwegian writer Bjornstjerne Bjornson who at the beginning of the 20th century defended the rights of Slovaks within the Austro-Hungarian Empire. A bust of Bjornson by Slovak sculptor Viťo Bojňanský is displayed in the courtyard.

Trine Skymoen, the Norwegian Ambassador to Slovakia, participated in the courtyard’s opening, together with Gry Larsen, the state secretary of the Norwegian Foreign Ministry, contemporary Norwegian writer Edvard Hoem and other guests. During the ceremony the works of Norwegian composer Edvard Grieg were played by the Slovak Chamber Orchestra of Boh-dan Warchal. The courtyard, which had formerly been used for parking, has been covered with a roof and will now serve as a stage for summer productions as well as smaller performances during the rest of the year.

The Reduta building dates back to the beginning of the 20th century and was designed to resemble a similar building in Vienna with the same name. Over the decades it suffered from the effects of the weather, vibration caused by passing trams and a shoddy earlier reconstruction. The latest rebuild was made necessary due to the lamentable state of the building.

According to the companies involved in this reconstruction the building is now closer to its original design than the original builders were able to manage, hampered as they were by financial limits imposed by the onset of World War I.

When the Reduta was closed at short notice in April 2009 because of its poor structural condition, the Philharmonic moved across the square, performing in the historical building of the Slovak National Theatre for almost three years while the building was thoroughly renovated.