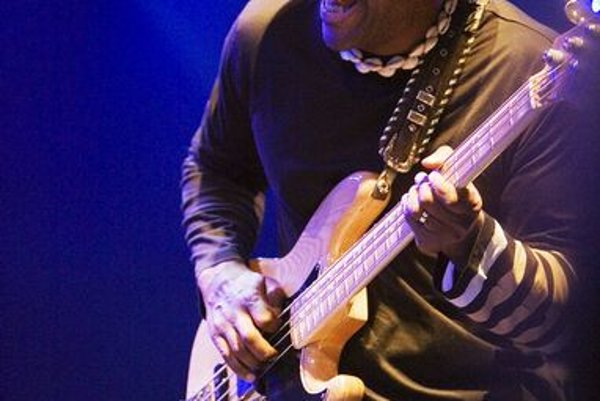 Bratislava
CONCERT:
SOME world-famous musicians will give a concert on May 24 as part of the Spring Bratislava Jazz Days. Headlining is US bass-guitar player, multi-instrumentalist and Grammy Award winner Marcus Miller, who cooperated with many stars of rock, jazz, pop, R&B, hip-hop, new wave, and even opera. Also performing are British jazz-funk band Level 42, combining their well-known hits with musical virtuosity. Tickets for the concert at Expo Aréna, Viedenská cesta 3-7, cost €30-€50 and can be purchased through www.ticketportal.sk. More info can be found at www.bjd.sk.

Bratislava
BALLET: Spiaca krásavica / Sleeping Beauty – This classical ballet fairy tale for both children and adults, set to music by Tchaikovsky, has been choreographed by international dance star Vladimir Malakhov and will be premiered on Friday, with a re-run on Saturday. Malakhov said that the original version was four hours long, but the current one has been cut to two hours and adapted for younger audiences.
Starts: May 27, 19:00; new building of the Slovak National Theatre, Pribinova 17. Admission: €6-€12. Tel: 02/2047-2299; www.snd.sk, www.ticketportal.sk.

Bratislava
GASTRONOMY: Slovak Food Festival – In the grounds of Bratislava Castle, the third year of this festival of gastronomy will offer tasting of typical Slovak as well as foreign meals and dishes, culinary shows, workshops, competitions, the Slovak oyster-opening championship, creative craft workshops, and more.
Starts: May 25 to 27, grounds of Bratislava Castle. Admission: free, food is provided in return for special coupons available for €6 or €12. More info: www.slovakfoodfestival.sk.

Bratislava
LIVE MUSIC: TM Stevens – The ‘Rock in the Museum’ series presents this US bassist and singer, who has played with legends like Miles Davis, James Brown, Tina Turner, Mick Taylor, and others.
Starts: May 22, 19:30; Múzeum obchodu, Linzbothova 16 (Podunajské Biskupice). Admission: €12. Tel: 02/4524-3167; www.rockvmuzeu.sk.

Žilina
CONCERT:THE ALEXANDROVCI are a Russian ensemble that serve as the official choir of the Russian armed forces. Known internationally as the Red Army Choir, the group consists of a male choir, an orchestra, and a dance ensemble. They performs songs ranging from Russian folk tunes to church hymns, operatic arias and popular music. The Alexandrovci are currently touring Slovakia as part of their 2012 European Tour and will perform at Žilina’s ice hockey stadium at 19:00 on May 27, with Czech singer Bára Basiková as a guest. Tickets, costing €17-€45, are available from www.ticketportal.sk.

Kremnica
LIVE MUSIC: Trio Ovsepian, Camarda, Valihora – These three musicians (the latter is Slovak), who all studied at the prestigious Berklee College of Music in Boston, play their own compositions, including classical music, ethno, modern jazz and more. Aside from the Kremnica concert, they will also perform in Bratislava.
Starts: May 21, 19:00; Akropola Club. Admission: €8. Tel: (Information Centre) 045/6742-856; www.1115.sk.

Banská Bystrica
EXHIBITION: Košická moderna - Eugen Krón a jeho škola / The Košice Modernist Movement - Eugen Krón and his School – In cooperation with the Eastern Slovak Gallery in Košice, this local gallery has prepared an exhibition presenting the artworks of a painter who made the core of his work in Košice, on the 130th anniversary of his birth.
Open: Tue-Fri 10:00-17:00; Sat-Sun 10:00-16:00 until June 3; Pretórium, Š. Moysesa Square. Admission: €0.50-€1.50. More info: www.ssgbb.sk.

Košice
FESTIVAL: Use the City – This festival is aimed at bringing several types of art and entertainment onto the streets and livening up the public space. The parts are called The Cardboard City (May 24-27, Square in front of Aupark), City Full of Life (May 25, pedestrian precinct of downtown Košice), and Bodies in Urban Spaces (May 26-27, tour begins in front of the Dargov shopping centre).
Starts: May 24-27, downtown. Admission: free. More info: 055/6854-299; www.kosice2013.sk/en, www.usethecity.sk/en.