FORMER justice minister Lucia Žitňanská said in her pitch for the leadership of the Slovak Democratic and Christian Union (SDKÚ) that she wanted to make it the first choice for non-left-wing voters, offering a trustworthy alternative to Smer, the dominant ruling party. However, delegates at the SDKÚ’s May 19 congress instead voted to elect her main opponent, Pavol Frešo, the president of the Bratislava Self-Governing Region, as chairman. According to the latest opinion poll, the SDKÚ is scoring so poorly that it would not even make it into parliament if an election were held now. 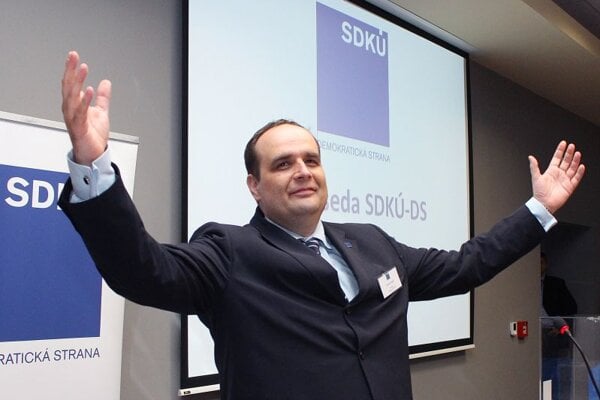 Can Pavol Frešo succeed in halting the deep slide in support for the SDKÚ'? (Source: SITA)
Font size:A-|A+  Comments disabled

FORMER justice minister Lucia Žitňanská said in her pitch for the leadership of the Slovak Democratic and Christian Union (SDKÚ) that she wanted to make it the first choice for non-left-wing voters, offering a trustworthy alternative to Smer, the dominant ruling party. However, delegates at the SDKÚ’s May 19 congress instead voted to elect her main opponent, Pavol Frešo, the president of the Bratislava Self-Governing Region, as chairman. According to the latest opinion poll, the SDKÚ is scoring so poorly that it would not even make it into parliament if an election were held now.

Frešo says that he aspires to rebuild the party from the ground up, giving a stronger role to the regions within a process he calls “building a modern people’s party”, and to take it back into the top league.

“I want the SDKÚ to be united,” said Frešo shortly after the run-off vote in which he received 242 delegates’ votes to Žitňanská’s 154.

Frešo then offered a deputy chairperson’s position to Žitňanská but she refused it, prompting speculation about her future role in the party and in Slovak politics.

“It is important that we now stop dealing with ourselves but start addressing the problems of people in Slovakia,” she said, as quoted by the SITA newswire, while denying that the results were a disappointment to her.

Instead of Žitňanská, Viliam Novotný, the third leadership candidate, who did not make it into the run-off, secured a position as a deputy chair, along with Ivan Štefanec and Jozef Mikuš. Martin Fedor beat Zita Pleštinská in a run-off vote to become the fourth deputy chairman.

Frešo commented that there were no hidden reasons for Žitňanská’s rejection of the deputy leadership, saying that she now intends to focus on her work as an MP and within the Bratislava regional branch.

Political analysts said the choice of Frešo indicates that SDKÚ members opted for a more radical change, as well as decentralisation of power within the party. Žitňanská, they believe, may have paid a price for serving until recently as a deputy to former leader Mikuláš Dzurinda.

“After Dzurinda announced his departure from the party, it became completely obvious that regional bodies aspire to play a stronger role in the decision making of the party, while Frešo as, de facto, a representative of these groups means a greater guarantee of decentralisation of power in the party,” political scientist Marek Rybář, from the school of political sciences at Comenius University, told The Slovak Spectator.

Frešo was not a member of the party leadership in the lead-up to the SDKÚ’s poor result in the March general election and was not even a member of parliament at that time, Rybář said, adding that “thus Frešo formally represents for the SDKÚ a much larger change than Žitňanská, who was Dzurinda’s deputy and, until recently, a minister”.

Another thing that could have played a role, according to Rybář, is that Frešo is currently the only representative of the SDKÚ, as the head of the Bratislava Region, to have access to “public resources, power and the management of public affairs”.

For the head of the department of political sciences at Comenius University, Darina Malová, it could have been the alternative of a firm leader, who has experience in the management of real politics, which Frešo offered, albeit at a regional level, that resonated with the party delegates.

“In this respect I would stress that in the second round even people who previously voted for Žitňanská voted for Frešo and thus for me it appeared as though even her supporters from the first round preferred what Frešo stands for,” Malová told The Slovak Spectator.

Aside from the direction in which he may now take the SDKÚ, the new chairman must first of all consolidate the party, which means gaining the support of the whole organisation, not only its newly elected vice-chairs. Together, they will need to activate the local and regional organisational level of the party, according to Malová.

“To a certain degree the SDKÚ leadership recently appeared to become detached from real and local politics, so I think the first step will be to activate the membership base and the party's smaller regional organisations,” Malová said.

Rybář noted that the voters the SDKÚ intends to appeal to are very similar to the target groups of its rival, the Christian Democratic Movement (KDH).

“While the KDH has been liberalising since 2008, the SDKÚ, according to Frešo, now wants a return to people’s and national politics, which is instead linked with the KDH,” he said. Rybář added that since both parties are now declaring an interest in the same political goals, this could result in conflict.

The SDKÚ in the past developed its centre-right support base among the urban population and among citizens of smaller towns, as an alternative to the more conservative, right-wing views of the KDH. At the last election, the party suffered significant losses in both of these areas and this, according to Rybář, is the most natural electorate to which the party could return.

Malová agreed that Frešo will now have to unify the party and then provide a new programme, adding that the current political situation and statements made by Prime Minister Robert Fico offer many opportunities to respond.

“[One] might be the fight for the second pension pillar,” Malová said, adding that the policies as a whole amount to an ideological discourse about “whether we want to have more state in Slovakia or more independent mechanisms of the market.”

As for Frešo’s declarations to “return to the party’s roots”, Malová said that these are exactly the type of excessively generalised statements which are really hard to evaluate. One of the SDKÚ’s pillars is conservatism, and so Frešo might want to strengthen its Christian and Catholic links, she added.

Meanwhile, one of the issues discussed in the media shortly after Frešo’s election was the fact that he now holds three high-ranking public posts: the party chairmanship, a seat as an MP and his presidency of the regional government.

“I moved up with 22,000 preferential votes from 9th place on the election slate with a very minimal campaign,” Frešo told Slovak Television, referring to his relatively strong performance in the general election. He added that voters had made it clear that they wanted a regional president to sit in parliament.

Dzurinda, in his speech to the party congress, said he is leaving the party leadership at a complicated but not hopeless time.

“I would like to tell the pessimists that my lifetime experience in politics tells me that you can go from 6 to 20 percent but also to 3 percent or even lower,” he said, as quoted by the TASR newswire. He was referring to dissent in the party over its election result: its vote in March fell to 6.1 percent, down from 15.4 percent in the 2010 general election.

He insisted that the founders and representatives of the SDKÚ have changed Slovakia for the better.

Frešo said that one of the reasons why the SDKÚ had suffered at the polls was that it did not sufficiently defend the middle class. He said that he considers the party to have made a mistake by not opposing monopolies, thereby leaving that issue to the left parties. He was also critical of the SDKÚ’s attitude towards the Gorilla file, an unverified, internet-published document that contains alleged transcripts of covertly recorded conversations from an SIS intelligence agency operation during the second Dzurinda government in 2005-6. The SDKÚ was not able to respond effectively to the file’s implication that there was widespread high-level corruption at the time it held power.

Observers agree that the SDKÚ completely failed to respond to the discourse around Gorilla and that its election campaign messages completely failed to match what was in fact the major topic of public debate. In an earlier interview with The Slovak Spectator, Rybář said that Dzurinda perhaps assumed that discussion of the Gorilla file would subside and that before the election some other issues would surface to divert attention from it.

However, no such issues emerged and pressure mounted on Dzurinda in the weeks before the election to withdraw from the top spot on the SDKÚ candidate list. This allowed Žitňanská to announce that she would seek the chairmanship after the elections, providing she received enough preferential votes. She ultimately received 103,517 preferential votes, almost four times more than Dzurinda’s 27,242 (and almost five times more than the 21,768 Frešo received).