REFORMING a country’s health-care system or its old-age pension scheme is one of the most sensitive political undertakings anywhere in the world, as it is closely watched by retired citizens as well as by those who may not retire for several decades. But in Slovakia, regular changes in the country’s pension scheme have almost become routine if one counts the number of changes that parliament has made to the system since its current form was introduced in 2004. 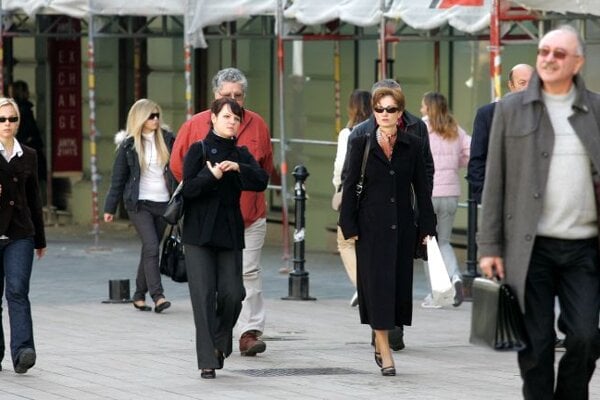 REFORMING a country’s health-care system or its old-age pension scheme is one of the most sensitive political undertakings anywhere in the world, as it is closely watched by retired citizens as well as by those who may not retire for several decades. But in Slovakia, regular changes in the country’s pension scheme have almost become routine if one counts the number of changes that parliament has made to the system since its current form was introduced in 2004.

The government of Robert Fico has announced that it wants to again change Slovakia’s old-age pension scheme, affecting what is called the second pillar, a privately-managed savings system, as well as the first pillar, the state pension programme administered by Sociálna Poisťovňa, the country’s state-owned social insurer.

“The pension system in its current condition is absolutely unsustainable and fundamental modifications must be made to it,” Prime Minister Robert Fico stated on May 22, as quoted by the SITA newswire.

Proposed changes to the second pillar may include reducing the rate at which employees can designate contributions to it, the number of available investment funds and changes to the rules for young people entering the second pillar. Pension experts say the second pillar, which has been changed more than 20 times in the last eight years, needs stability and political wisdom so that it can benefit all Slovaks who are saving for their retirement using it.

The government’s announced plans also include introducing a minimum monthly pension paid by Sociálna Poisťovňa, a gradual increase in the normal retirement age after 2016 in accordance with changes in Slovaks’ life expectancy, and the introduction of what the government calls “more solidarity” to the social insurance scheme.

Modifications are also expected to be proposed to the current valorisation method applied to monthly pensions from Sociálna Poisťovňa, which currently change annually on a percentage basis according to changes in average national salaries and inflation. The government’s proposal may be to increase pension benefits only by a flat amount said Jozef Burian, the state secretary (i.e. deputy minister) of the Labour Ministry, who added that this would apply only during the term of the current government; the longer-term goal is to switch to a valorisation method based on what he called ‘retiree inflation’. He said the principle of ‘retiree inflation’ gives greater weight to the inflation rate while reducing the influence of the growth of average salaries on pension increases for current retirees, SITA reported.

“Gradual raising of the retirement age to at least 65 and a slow-down in the rise of pensions only to the level of inflation would, according to our calculations, secure the sustainability of the pension system until roughly 2040,” Peter Goliaš, director of the INEKO think tank, told The Slovak Spectator.

The Ministry of Labour has also proposed strengthening what it called “solidarity in the state-run pension system”. The pensions of individuals who currently earn 1.25 times or more than the average salary in Slovakia during their working life are currently proportionally reduced, but there may be a new proposal to reduce the state pension for all individuals who earn a salary above the national average. If this change is enacted by parliament, employees with higher-than-average earnings may receive lower pensions from Sociálna Poisťovňa than those that are calculated according to the current method.

“There must be greater solidarity in the pension system,” Burian stated, as quoted by SITA.
Goliaš said this idea of greater solidarity will lead “to weakening in the motivation of people with higher incomes to pay payroll taxes”.

The new cabinet has also stated that it wants to cut the rate at which contributions can be made to the second pension pillar, currently at 9 percent, in order that more contributions flow to the state-run first pillar. Though the government has not specified a specific percentage rate, Burian said at a round table discussion on May 21 concerning the second pillar that Slovakia might take an approach like Poland did when it reduced contributions to its privately-administered system from 7.3 percent to 2.3 percent. The Czech Republic, which has a second pillar that currently receives 3 percent of employees’ contributions, could also influence the Slovak government, SITA wrote. The media have reported as well that the contribution rate to the second pillar could be reduced from 9 percent to 6 percent.

The ministry stated that the proposed contribution rate will be decided based on the government’s overall public deficit consolidation plans. The Sme daily wrote that a one percent reduction in the amount contributed to the second pillar “could add €100 million for Sociálna Poisťovňa”.

Stanislav Žofčák, chairman of the board of the Association of Pension Funds Management Companies (ADSS), the association that clusters companies with investment vehicles under the second pillar, told The Slovak Spectator that the changes will have an impact on the future amount of pension benefits that can come from second pillar funds because the amount contributed by those participating will be less. He added that it is impossible to estimate or calculate the exact impact since the details of a likely amendment to the country’s pension law as well as the method of valorisation of pension benefits paid by Sociálna Poisťovňa are unknown at this time.

Changes introduced by the previous government of Iveta Radičová that became effective on April 1 this year gave participants in the second pillar a choice of four kinds of investment funds: a bond fund, a balanced fund, a stock fund and a new, equity-linked index fund. Under current law only the bond fund is subject to a state-mandated guaranteed return on savings. Media have reported that the Fico government is also considering reducing the number of funds available to participants in the second pillar.

Žofčák told The Slovak Spectator that he does not expect any particularly negative impact if the number of funds is reduced.

“The essence, nevertheless, will be that the [range] of funds for savers and the possibility to distribute their savings to funds managed with different approaches will be restricted,” Žofčák stated. “Currently, we do not oppose the idea of having two funds: one guaranteed and one not. However, we see room for the index fund with the option that the management company and, subsequently savers, could have higher variability in distributing their savings.”

The head of ADSS said a priority of his association is good communication with the government, adding that ADSS would like to see a rational approach taken based on demonstrable facts and figures.

“Constant changes to the parameters of the [pension] system not only evoke doubts about its results but also directly and, unfortunately, negatively influence the system,” Žofčák stated, adding he believes there will be further negotiations with the government about how to develop the second pillar.

The most recent amendment to Slovakia’s pension system, approved by parliament last September, eliminated all but one of the government-mandated investment return guarantees introduced in 2009 and applied to funds operating in the second pillar. The amendment also requires young workers entering the labour force – as was the case when the second pillar was created in 2004 – to be automatically enrolled in the pillar, but gives these employees the option to withdraw within two years if they wish to do so.