THE government of Prime Minister Robert Fico, whose Smer party controls a majority of seats in parliament, looks set to make an unprecedented decision and appoint an opposition representative to a government post. However, the post of government proxy for national minorities is currently under discussion and it is still not certain that it will be offered to Most-Híd party, which has a strong base among Slovakia’s Hungarian-speaking population, or how much power the holder would wield. 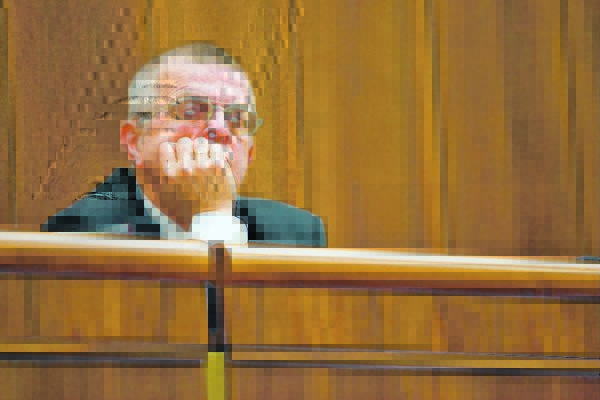 László Nagy could be in line for a government post. (Source: SME)
Font size:A-|A+  Comments disabled

THE government of Prime Minister Robert Fico, whose Smer party controls a majority of seats in parliament, looks set to make an unprecedented decision and appoint an opposition representative to a government post. However, the post of government proxy for national minorities is currently under discussion and it is still not certain that it will be offered to Most-Híd party, which has a strong base among Slovakia’s Hungarian-speaking population, or how much power the holder would wield.

Creating the post of plenipotentiary for minority issues is still in progress following the decision by Fico’s cabinet to eliminate the position of deputy prime minister for national minorities and human rights, a move that was strongly criticised by many NGOs. For now, Fico and his cabinet remain tight-lipped about the details of the position and who might fill it.

“The new structure of government plenipotentiaries is currently being created,” the Government Office’s press department told The Slovak Spectator, adding that as soon as it is finalised it will be presented to the public.

Slovak media have already written that Fico offered the post of government plenipotentiary for minorities to Most-Híd, which bills itself “the party of cooperation” and aims to represent all the national minorities living in Slovakia, as well as members of the majority Slovak population. In reality most of its support comes from the Hungarian community living in Slovakia and it is perceived as one of two “Hungarian parties” in the country.

“The important thing is what the status of the plenipotentiary will be, whether there will be concrete powers or an office with no impact on minority culture and so on,” said Most-Híd chairman Béla Bugár, as quoted by the Sme daily, while not ruling out the possibility that a person nominated by his party could take up the post.

Most-Híd later confirmed that it might nominate László Nagy, a former MP who has served as chairman of the parliamentary committee for minorities and human rights. He ran for parliament on Most-Híd’s slate in March from position 12 but did not make it into parliament because even though the party won 13 seats he was edged out by other candidates with more preferential votes.

Prime Minister Fico did not make it known whether Nagy is likely to be appointed but did confirm he had offered the chance to Most-Híd of nominating a candidate, saying that he does not find anything wrong with the idea of having the post filled by someone from a party representing the largest minority group in Slovakia, the SITA newswire reported.

Fico also said that his intention to pass the responsibility to a Most-Híd nominee was also a factor behind the elimination of the deputy prime minister's position.

“We have decided not to appoint someone to this post and instead create the office of a plenipotentiary with certain powers and offer this to the representatives of opposition political forces that represent the Hungarian national minority,” Fico stated, as quoted by SITA.

Representatives of non-governmental organisations and opposition politicians have roundly criticised the decision to eliminate the position of deputy PM for minorities and human rights since this was announced in April, saying it reveals a lack of concern about human rights issues by a government dominated by Smer, a political party that considers itself to be social-democratic. Smer has responded that minority issues and human rights can be better handled if they are the responsibility of several ministries.

“It will be better for the agenda to be covered by several ministries so that it has strong, political roofing,” Smer spokesperson Erik Tomáš previously told the Sme daily. It has been reported that educational issues involving minorities in Slovakia would be handled by the Education Ministry and the Culture Ministry would deal with cultural issues of minorities. Fundamental human rights issues would be the responsibility of the Foreign Affairs Ministry, which currently has a section dealing with human rights.

Fico first announced that his government might create the post of plenipotentiary for national minorities on April 18.

The proxy post should be held by an “authentic representative of national minorities with experience in civil society”, Fico stated, as quoted by SITA, adding that there is no doubt that Nagy meets those requirements.

After news emerged that Nagy was a potential candidate for the post of government proxy, Slovak media started reporting on his past, with some outlets suggesting that his record may not have been entirely spotless.

Nagy was a witness in the prosecution of Eugen Čuňo, a former deputy mayor in Košice from the Slovak Democratic and Christian Union (SDKÚ) on charges of corruption. He was charged with corrupt practices in 2004, Sme wrote.

Sme reported that Nagy’s name surfaced in intercepted phone calls with another person involved in the corruption case, but Nagy has denied any wrongdoing.