THE FOOD AID plan put in place in 2011 was supposed to ameliorate the effects of rising food prices for socially vulnerable groups in society, such as infants, seniors, people with lower incomes and people living below the subsistence level. What seemed last year to be a well-meaning gesture has since turned into a controversy, even resulting in a criminal complaint being filed with the Office of the Prosecutor General. 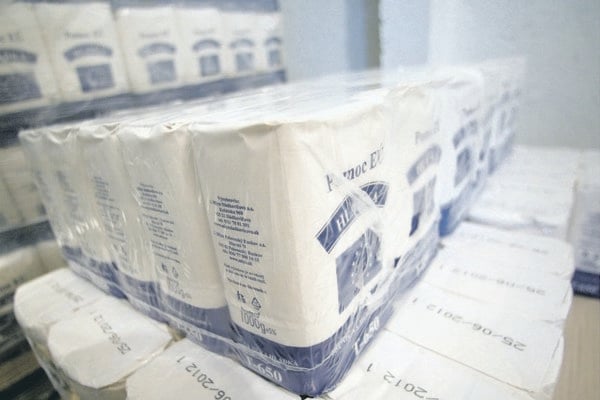 THE FOOD AID plan put in place in 2011 was supposed to ameliorate the effects of rising food prices for socially vulnerable groups in society, such as infants, seniors, people with lower incomes and people living below the subsistence level. What seemed last year to be a well-meaning gesture has since turned into a controversy, even resulting in a criminal complaint being filed with the Office of the Prosecutor General.

The Agricultural Payment Agency (PPA) filed the criminal complaint – alleging possible fraud by persons unknown – in mid May, following problems in the distribution of the food aid. The decision came after a series of newspaper articles about 3,500 tons of food that had apparently not been supplied to intended recipients. The food products, pasta and flour, were supposed to have been produced by Euromills-Trade, the company which won a state tender to produce the products using grain supplied by the EU.

“All the facts which we have indicate that there is a serious suspicion of fraud in handling the flour and pasta,” said Prime Minister Robert Fico, as quoted by the SITA newswire, during a press conference held on May 16.

He highlighted as “dubious” an amendment to the agreement between the state-run PPA and Euromills-Trade signed after the fall of the Iveta Radičová government. The amendment permits the company to recover a guarantee it has paid to the government even if the state fails to take delivery of the food it has produced, SITA wrote.

The distribution of free food to the neediest people began as a European Union project in 1986-1987, when surpluses of agricultural products were given to charities in EU member states for distribution to those in need, according to an official release by the European Commission.

The previous Slovak government announced at the end of February 2011 that Slovakia would join the project. It also announced a public tender to process 45,000 tonnes of grain into flour and pasta for distribution to people eligible for state assistance. Each recipient could claim 20 kilograms of flour and 20 kilograms of pasta.

Yet despite the fact that the state found a company which promised to make the food from grain and also found non-governmental organisations to distribute it – resulting in food aid that would go to more than 412,000 people – nearly 88,000 people eligible for assistance are now unlikely to receive their portions, the Sme daily reported.

While the prime minister has aired doubts about whether the food in question was ever actually produced, since Euromills-Trade has not allowed ministry auditors to enter its storage sites, representatives of the company claim that they have fulfilled their side of the agreement.

The problems with food aid distribution were first reported by the Nový Čas daily, which wrote that the Food Bank of Slovakia (PBS), an NGO, had not taken delivery of 3,500 tons of food from Euromills-Trade warehouses. The main reason for this, according to the daily, was that the PBS, which should have distributed the food directly to the needy, was short of money.

Though the Agriculture Ministry promised to find another delivery agent, the food in question was close to its expiry date and risked having to be thrown away.

Another problem was the amendment to the agreement on food aid distribution signed at the end of November 2011 between Euromills-Trade and the state-run PPA.

To make sure that Euromills-Trade would really make the food, the company originally paid a guarantee of €1.18 million, which it would forfeit back to the state if it did not supply as promised. However, the November amendment changed the original conditions for repayment of the guarantee and stated that Euromills-Trade had the right to ask for the money in the event that an organisation responsible for distributing the food did not collect it from its storage sites by the end of February 2012, TV Markíza reported.

Moreover, the amendment increased the number of storage sites to which the food aid was to be delivered by Euromills-Trade. These new storage sites, according to the TASR newswire, were mostly the property of the suppliers who later distributed the food aid to recipients.

The current government said it does not know what the real status of the scheme is since Euromills-Trade did not allow the previous government to send ministry auditors to check its warehouses. This, according to Fico, raises doubts about whether the food was ever actually made.

“We may assume that the 3,500 tons never actually existed,” Fico added, as quoted by TASR.

According to Agriculture Minister Ľubomír Jahnátek, the main person responsible for the current state of affairs is his predecessor, Zsolt Simon, since the amendment was signed during his tenure as agriculture minister.

“Simon knew very well that there was a problem and that sooner or later it would surface,” Jahnátek added, as quoted by TASR. “We have transcripts of three recordings from the minister’s meetings and they differ from the official meeting minutes.”

He alleged that Simon threatened to fire ministry employees if they provided any information on the subject of food aid delivery outside the meeting room.

Simon responded that the ones responsible for any possible fraud would be Jahnátek and the current head of the PPA, Stanislav Grobár, who he said have done nothing to solve the problems, even though he had warned about them during a press conference held before the appointment of the new government, SITA wrote.

He also responded to Jahnátek’s allegations about the recordings, describing them as “completely misleading information”.

“I recommend everyone to read the transcript and not just pieces taken out of context,” Simon told TASR.

Meanwhile, Euromills-Trade published a statement in which it denied responsibility for the problems, saying it was “the Agricultural Payment Agency which did not allow us to deliver the food”.

The chairman of the board of directors of Euromills-Trade, Róbert Daduliak, said that during a meeting with the NGO responsible for distributing the food, PBS, its representatives said that they would not be able to accept the food.

“Therefore we used our legal right and terminated the agreement on March 14, 2012, based on the section pertaining to undelivered food,” Daduliak said, as quoted by SITA.

He added that though their duty to deliver the rest of the food aid had thus ceased, Euromills-Trade was obliged to pay for the uncollected food. Daduliak said that Euromills-Trade was ready to meet this obligation and that the company had already offered to compensate the PPA for the loss.

Moreover, he said the company will not ask the state to return the guarantee before it pays the compensation.

“Thus we absolutely reject claims that we want to keep both the food and the money,” Daduliak told SITA.

According to EU rules, it does not control how the grain it gives to countries within its Food Aid Programme is used since this might result in “postponement of aid to those who need it the most”, Andrej Králik, head of the press and political section of the Representation of the European Commission in Slovakia, told The Slovak Spectator.

He added that the EC would carry out an audit as soon as delivery of the food aid ceased.

“If the commission finds out that the resources were not used in accordance with the rules, it will demand the return of the financial resources,” Králik said, adding that the country would only pay for those resources used in an unauthorised way.

Despite current problems with the food aid programme, the government is preparing to ask the EU for more help by re-joining the food aid programme. However, Jahnátek now says that this will not happen until next year as the ministry does not have enough time to prepare an application to participate in the 2012 scheme, which must be submitted by the end of May, Sme reported on May 19.

When asked how the Agriculture Ministry plans to avoid a repeat of the problems in the food aid distribution, Agriculture Ministry spokesperson Magda Tóth Želeňáková told The Slovak Spectator that it would certainly “not prepare the project as former minister Zsolt Simon did, which turned the aid for the most deprived [people] into a business tailored to [the needs of] a person or a company”.