THE POPULATION of seniors – broadly, those aged 55 and above – has been increasing across Europe, and Slovakia is no exception. This brings at least two main challenges: first, society has to find a way to cope with this demographic change and the effects that having a higher share of seniors will mean in terms of health and social care; second, the growing group of elderly represents a challenge for firms who want to develop products tailored to such clients. Companies in the insurance sector are among such firms, especially given that Slovak seniors have not before been targeted to purchase life insurance. 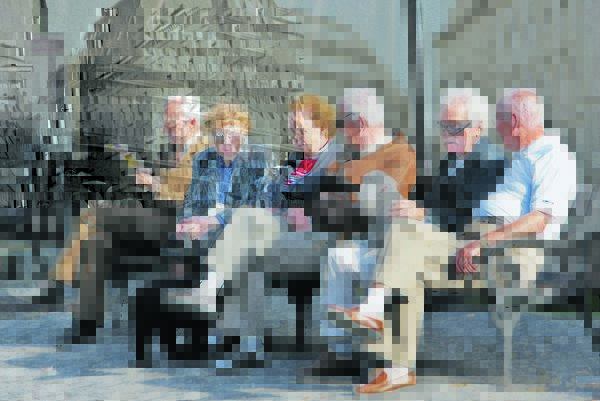 THE POPULATION of seniors – broadly, those aged 55 and above – has been increasing across Europe, and Slovakia is no exception. This brings at least two main challenges: first, society has to find a way to cope with this demographic change and the effects that having a higher share of seniors will mean in terms of health and social care; second, the growing group of elderly represents a challenge for firms who want to develop products tailored to such clients. Companies in the insurance sector are among such firms, especially given that Slovak seniors have not before been targeted to purchase life insurance.

“In developed countries pensioners are a group with significant purchasing power,” Jozefína Žáková, the general director of SLASPO, the Slovak Insurance Association, told The Slovak Spectator. She added that the situation in Slovakia is different, pointing to the generally low incomes of seniors here. Despite this she believes that it may be possible to develop sophisticated insurance products to protect seniors from unexpected events. “However, the development and sale of such products is hindered so far not only by the low purchasing power of seniors, but also by a lack of tradition and maybe also financial literacy.”

Slovak insurance companies have already recognised the so-far untapped potential of this segment of the market and have started offering products designed to attract seniors’ attention. They already offer a range of life and accident insurance products for seniors.

ING Životná Poisťovňa is one of the latest firms to launch special products for seniors. In late April it introduced ING Smart Senior, a life insurance product for people aged 55 and over.

“There were actually two reasons why we started to offer this product,” Petra Mušková, product manager for ING Životná Poisťovňa life insurance, told The Slovak Spectator. “A detailed analysis of our product portfolio revealed that a large number of insurance policies are nearing the end of their insurance period and that these involve clients who have passed 55 years of age. The second reason was the absence of a product focused on existing and potential clients of an older age.”

The survey, which the 2Muse agency conducted for the insurer, confirmed that seniors in Slovakia are concerned about who will care for them in their old age. The insurer reported in a press release that almost two thirds of respondents aged 55 and above said that young people are not interested in their needs. Simultaneously, as many as 72 percent of respondents are afraid of a possible financial crisis, and as many as nine out of ten do not want to become a burden to someone in their old age and instead wish to remain independent. The survey also found that 41 percent of people over 55, despite having lower-than-average incomes, are still able to put aside up to €50 every month.

There are currently 975,000 people aged over 60 living in Slovakia, out of a total population of 5.4 million. Over the next five years that number is expected to increase by 18 percent to about 1.15 million, and over 10 years to increase by 40 percent to 1.35 million, 2Muse wrote, citing data from Eurostat and the Slovak Statistics Office.

The social insurance provider Sociálna Poisťovňa reported in May that the average old-age pension in Slovakia was €374.75, and that as many as 963,000 people were receiving this kind of pension at the end of April.

ING Životná Poisťovňa says it wanted to create a product that low-income seniors could afford.
“We realise that the pensions of Slovak pensioners are often very low,” Mušková said, adding that the lowest price for which it is possible to buy ING life insurance is €9 per month.

The insurer says that it is too early to assess the level of interest yet as the product has only been on sale for a few weeks.

Mušková specified that the product is designed for persons aged between 55 and 80 and can be adjusted to the needs of seniors in different phases of their lives. The minimum insurance period is five years. The insurer offers a range of additional insurance products in order that the final product covers risk of death, disability, accident and hospitalisation, as well as an assistance service.

ING Smart Senior also aims to fill a gap in the insurance market in response to complaints by seniors about high prices and the absence of life insurance products for their age group.
Other insurance companies are also responding to perceived demand from seniors.

“Seniors are a group with specific characteristics and needs,” Gabriel Tóth of Allianz-Slovenská Poisťovňa told The Slovak Spectator.

Generali Slovensko considers seniors to be one of the most interesting segments of the market since their number continues to grow and currently there are few products that cover their needs.

“In Slovakia a general opinion currently prevails that it is not possible to insure seniors due to their high age or worse health condition,” Branislav Jendroľ, head of the life insurance department at Generali Slovensko, told The Slovak Spectator. “Our efforts in innovation is oriented to seniors so we can provide them services in line with their requirements.”

With regards to obstacles to creating insurance products for seniors, Jendroľ said that since services for seniors are neither widespread nor well-monitored in Slovakia, statistics are lacking.

“But we register an interest either from middle-aged people who have not reached retirement age yet but realise the need for care in their old age, as well as younger people, who save in any form for their pension age or have experienced taking care of a senior in their household,” said Jendroľ.

When talking about pitfalls in developing insurance products for seniors, Tomáš Ogrodník, manager for life insurance at Uniqa, said that it is very important to harmonise and optimise premiums paid now and expected future insurance payments.

“A very important indicator for products with planned payments at a higher age is life expectancy, which has increased thanks to higher living standards compared with the situation 20-30 years ago,” Ogrodník told The Slovak Spectator. “Life expectancy has grown for men as well as women, while women continue to live longer. But this indicator touches upon not only life insurance for seniors but also insurance products for the current population of productive age.”

Based on data from the Statistics Office, the life expectancy of women in Slovakia was 78.84 years in 2011 while for men it was 71.62.

Uniqa, along with other insurers, says it has noticed a change in people’s attitudes towards life insurance. While interest in property insurance has prevailed over life insurance in the past, the situation is now different partly because clients care more about their money and are interested in the benefits of insurance products as compared to other products in the financial market. Ogrodník agreed that the limited monthly payments that seniors can make means the question of life insurance is even more sensitive for them, and this is why they often choose insurance products with a one-off premium which they can use their savings to pay for.