IT IS NOW clear that banks in Slovakia will be asked to make a significant contribution to the government’s effort to boost its revenue and reduce the country’s public finance deficit. The government has announced it will pursue a higher rate for the so-called special levy that banks began paying this year, while also mandating that banks offer a low-cost banking product so that the burden of the levy does not fall on the most vulnerable customers via higher fees. A similar basic banking package mandated by the Finance Ministry in 2010 to fire up bank competition on fees attracted only a handful of customers. 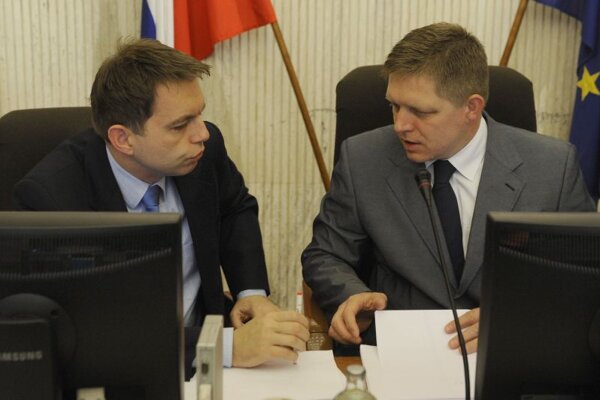 IT IS NOW clear that banks in Slovakia will be asked to make a significant contribution to the government’s effort to boost its revenue and reduce the country’s public finance deficit. The government has announced it will pursue a higher rate for the so-called special levy that banks began paying this year, while also mandating that banks offer a low-cost banking product so that the burden of the levy does not fall on the most vulnerable customers via higher fees. A similar basic banking package mandated by the Finance Ministry in 2010 to fire up bank competition on fees attracted only a handful of customers.

The draft amendment to the law on banks states that the new banking product will be made available only to customers with monthly incomes less than the country’s minimum wage, but Prime Minister Robert Fico said on May 28 that “if the banking sector continues hiking fees, we will introduce this basic banking product for all people in Slovakia, without exception”, the SITA newswire reported.

Fico also wants to capture more revenue from the banking sector via a higher rate of corporate income tax and expanding the base on which the special bank levy is calculated. The National Bank of Slovakia reported that banks in the country recorded a 34 percent increase in net profits from 2010 to 2011, to reach €674 million.

Banks operating in Slovakia have been paying a special tax levy since the beginning of 2012 at a rate set at 0.4 percent of the banks’ liabilities after equity capital and deposits covered under Slovakia’s deposit protection system are deducted. Fico wants to expand the base on which the levy is assessed so as to include retail deposits, with the government saying this would bring an additional €25 million in revenue to the budget this year and €100 million next year.

Fico also told the media that members of the country’s tripartite council, consisting of representatives of employers, trade unions and government officials, had agreed to recommend a one-off levy of €50 million on banks this year but the prime minister said he will first negotiate with representatives of the banking sector about this measure to eliminate any possible negative impacts.

Banks are not the only companies that could be required to pay one-off levies to help reduce the public finance deficit: companies operating in regulated markets are also expected to be asked to pay €100 million in this way.

Vladimír Dohnal, the head of Symsite Research, told The Slovak Spectator that the special levy on banks will be paid either by their shareholders via lowered profits or by bank customers in the form of higher fees for services or other changes in banks’ operating procedures such as higher interest rates on loans or lower interest paid on savings deposits.

According to Dohnal, when the banks paid the special levy in the first quarter of 2012 at the rate established by the previous government they claimed their profit levels had dropped by 20 percent.

“This would signal that part of the levy was taken on by shareholders,” Dohnal stated. “I nevertheless think that most of the levy will be paid by bank customers.”

Dohnal said customers could pay higher service fees but also mainly a higher interest rate on loans, adding that retail banking customers, or what he called ordinary people, would be hit hardest because price competition for corporate customers is much stronger.

“By expanding the base for the banking levy, the tax burden on the banking sector in Slovakia will become the highest in the European Union, which will significantly reduce loans for firms and residents, with a negative impact on economic growth and employment,” Monika Kuhajdová, a spokeswoman for the Slovak Banking Association (SBA), told The Slovak Spectator.

Dohnal agreed that a consequence of a higher levy could be a limitation in the availability of loans, saying this is “a logical consequence of banks having less capital”.

“Fewer loans mean lower economic growth and less employment,” Dohnal told The Slovak Spectator. “One needs to be aware that this year new rules at the EU level will take effect requiring banks to have more capital and better capital adequacy ratios. The effect of these rules will be to limit the ability of banks to provide loans.”

Kuhajdová told The Slovak Spectator that Slovakia’s banks might experience net losses due to the higher amount of the special levy and this might reduce the value of the banks’ capital and their loan capacity, which will negatively impact the availability and cost of loans.

The government envisions mandating a low-fee banking product to ease the impact of higher bank fees on citizens with the lowest incomes. Based on information released so far by the government, a bank customer would not be eligible to have this low-fee banking product if his or her total financial transactions within a year exceed 14 times the country’s monthly minimum salary.

In 2010 the Finance Ministry of the previous Fico government required banks to offer what it called a basic banking product that had service fees ranging from €2.55 per month to over €8 per month depending on the package and the particular bank. This mandated package found little interest among Slovaks, with the banks claiming that the higher fees associated with it were caused by higher costs for the services that were required in the package, making it uncompetitive with similar packages offered and promoted by the banks. The SBA spokeswoman told The Slovak Spectator that since the association had not seen the details of the government’s proposal, it had no specific comments at this time.

“But the Finance Ministry previously introduced a similar package [in 2010],” Kuhajdová stated. “The banks invested considerable funds in its introduction and in reality only five people took the package and thus we are concerned that the [current] initiative of the ministry will have a similar fate.”

Dohnal said that having a banking product available only for those in the lowest income groups is not very sensible since these people “are simply not interested in such services”.

“Thus, it is only a marketing trick by the government and only very few customers might show interest in this product,” Dohnal stated, adding that most of the banks’ regular customers will not be eligible.

Slovakia’s Statistics Office announced in March that fees paid by Slovaks for financial services had increased by 8 percent from the same month in 2011. The Sme daily wrote that the biggest increase was in fees for cash withdrawals from cash terminals of banks other than one’s own, along with monthly fees for account administration.

“The amount and structure of fees depend on the business strategy of each bank,” Kuhajdová stated, adding that banks’ operating costs have been increasing. “For example, last year these costs increased by 13 percent. This is also a reason why banks are modifying fees.”

When asked by The Slovak Spectator about what Fico called taxation of the “super-standard incomes of the banks”, Dohnal said that the government has the power to introduce special levies or enact higher income tax rates but suggested this may not be the best way.

“Another way is to support competition among the banks, which has the tendency to reduce the profits of the banks,” Dohnal stated, adding that the past government had done quite a bit in this area, for example by improving the flow of information from banks to citizens, aiding in the possibility to change banks, and making it easier to transfer a loan between banks.

The prime minister also announced that to improve the country’s fiscal health, a vigorous battle will be launched against tax evasion. He said the government and the banking sector would cooperate in this area.

“Representatives of the SBA have proposed several measures to the Finance Ministry that would prevent evasion of VAT,” Kuhajdová said, adding that since these discussions are ongoing she could not offer any further details.