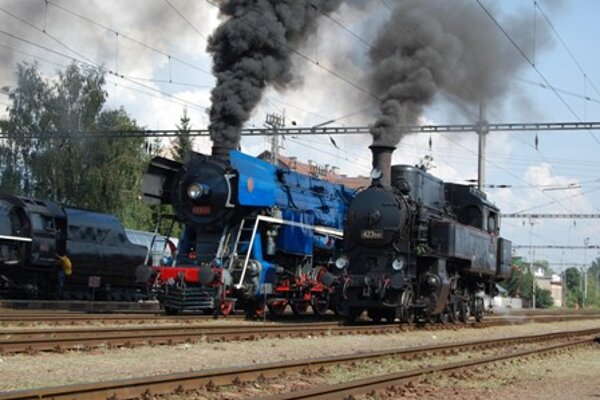 What kinds of projects does ZSSK CARGO support as part of its social responsibility?

One of our traditional projects is support of railway history. Since CARGO’s founding in 2005 it has been actively involved in organising public displays of historic railway vehicles in several towns – the most famous ones are at the Košice depot in spring, at Vrútky and Bratislava´s Rendez depots in June and in Zvolen in September. The Zvolen event is enriched with an annual steam locomotive race – the Grand Prix – unique in all of central Europe. These events are especially popular with families with children who have a keen interest in taking a closer look at historic machines. With the active participation of Slovakia’s railway companies, the ŽSR Museum and Documentation Centre, and volunteer engineering clubs, many unique railway vehicles have been saved from the junk yard.

Is preparation of such events expensive?

The events are a climax to the day-to-day activities of the volunteer clubs that care for old locomotives and wagons. Keeping the machines in operation is perhaps the most expensive part. The most active clubs are in Bratislava, Vrutky, Zvolen, Poprad and Haniska, near Košice. The club members are mostly active or retired railway employees, who volunteer to refurbish, repair and renovate vehicles with historic value and they do so with a high level of passion and professionalism. CARGO, as well as other railway companies, is thankful for their dedication to saving and maintaining historic artefacts with incalculable social value. Though only the direct financial operation of these clubs can be quantified, it is expensive, so CARGO supports these activities within its capacities by offering space, material aid and organising the public events.

CARGO contributed to the 2009 renovation of the unique train used in the Slovak National Uprising. Why?

The idea of renovating this historical train from the uprising originated with the Zvolen club and its head, Peter Oravec, attracted cooperation from the Museum of the Slovak National Uprising (SNP) in Banská Bystrica. Two original wagons from the five-wagon train were only serving as stationary memorials, one in the museum in Banská Bystrica and the other in the Zvolen railway repair shop. As a sponsor of the reconstruction, CARGO provided skilled workers, technology, know-how and use of its premises. Mechanics from our depot in Zvolen had a real challenge as they wanted to make 4 wagons operational that could be exposed to the elements and also sought to have them ready by the anniversary of the Slovak National Uprising. Several of the wagons had not been opened for 50 years and no one knew what was inside. Sceptics thought the wagons were too old and rusty and might not even survive transport to the repair site. But everything went very well and the refurbished train,
named Štefánik, premiered on August 29, 2009 in Banská Bystrica and Zvolen. The train has been used as part of reenactment of the battle at Stará Kremnička and has visited many other sites throughout
Slovakia and the Czech Republic. Thanks to the significant support from CARGO and the SNP Museum the interesting and challenging task was completed, earning respect from railway history buffs here and abroad. After extraordinary positive feedback from Slovaks, CARGO launched a tour of Štefánik in 2010, with stops at many stations, its movement around passenger and cargo trains, even attracting the attention of drivers on roads along the railway track. Štefánik even made some longer stops in bigger cities where it served as a “living textbook” on the history of the Slovak National Uprising for students from schools and the general public.

Are there other significant projects that ZSSK CARGO has participated in?

In 2007 the SNP Museum prepared a touring exposition on the death trains that deported thousands of Slovak Jews during World War II to concentration camps. The wagons from this period toured 31 Slovak
cities while authentically commemorating a horrible part of our history as only a few of the 58,000 Slovaks sent to death camps beginning in October 1942 ever returned. The general public and students learned much about this period of our history because the wagons were refurbished and were
nearly authentic to those used 70 years ago for the deportations. CARGO was a partner and moved the exhibition between the tour’s stations.

What future events or projects does ZSSK CARGO have planned?

Currently we are preparing the traditional events with historic rail engine and wagons in Vrutky for June and the Grand Prix of steam locomotives in Zvolen for September and assisting the clubs with material, technology, and help in organising and transporting the trains to different locations. These events are demanding on clubs’ time and finances and since other sponsors are not
flocking in to support these activities CARGO hopes to continue helping these enthusiastic clubs in keeping this tradition alive as the events are very popular and attract thousands of Slovaks. The
first steam engine arrived in Slovakia 164 years ago and the railways brought an agrarian Slovakia into the industrial revolution. ZSSK CARGO is an esteemed part of the history of railways here but
rail transport of freight is necessary for our country’s future because it has the smallest negative impact on the environment and nature, the highest level of safety, and low energy demands. Without remembering our past there can be no future. The goal of CARGO in supporting responsible transport business is clear as well as our goal in developing a fund to assist with the reconstruction of historic locomotives and wagons. We want to keep Slovakia’s rail system functioning well for future generations.